As promised, staff from Wightlink rose to the challenge, and paddled their way across the Solent on Saturday. 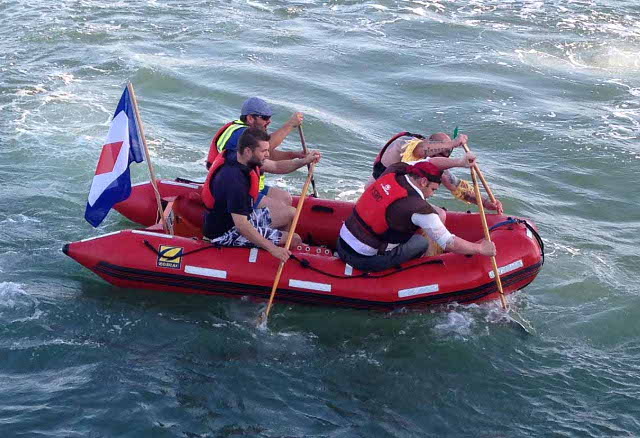 Wightlink Captain Tom Vincent and his crew of volunteer staff have raised £5,000 for Ryde Inshore Rescue by paddling a spare rescue boat more than five miles across the Solent from Portsmouth Harbour to Ryde Pier Head.

They secured sponsorship from friends and family and customers on Wightlink ferries and catamarans also gave money to repair Ryde Inshore Rescue’s vandalised rescue craft. Wightlink made a £500 donation.

“As mariners, we were angry when we heard the rescue boats had been damaged, it’s a cause we all feel strongly about.

“My heroic teams of paddlers were inspired to brave the elements and push on to achieve our goal. They got soaking wet and rather cold in the process, but they did not at any point complain, they just dug deep and battled on!”

“I want to thank everyone who supported this amazing event, especially Tom Vincent who has achieved so much in just ten days. We can now send our first boat to be repaired, thanks to the guys at Wightlink.”