The statistic was revealed at last night’s Scrutiny Committee during a discussion about the upcoming education consultation. 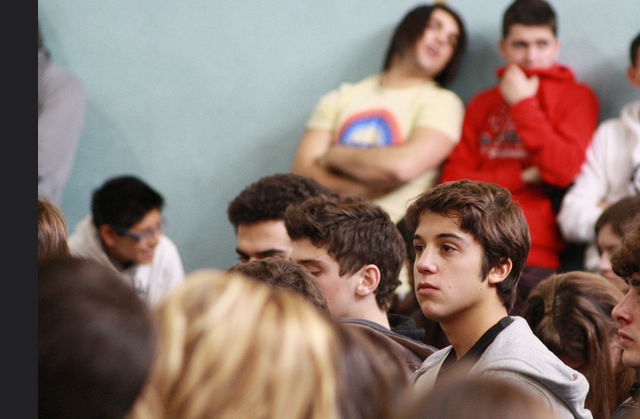 Whilst he was discussing the current provision for post-16 year old pupils – at the various sixth form colleges and the Isle of Wight College – Cllr Jonathan Bacon highlighted the poor rates of progression to university.

“Students completing A-levels progressing to higher education were 27% on the Isle of Wight, 1% to a top third university. That compares nationally to 44% and and 9% respectively.

“This is something we could be doing better.”

Update 29.1.2015:
Thanks to OnTheWight contributor, Wendy Varley, it has been discovered that the 27% statistic quoted at the Scrutiny Meeting and in the consultation document is actually from 2011 applies to just College pupils.

Consultation
A proposal to carry out a consultation is expected to be agreed at next week’s Executive meeting.

Full details can be found in the paper embedded below for your convenience. Click on the full screen icon to see larger version.

Upgrade the College to a University on the island and it would encourage the young people and it would provide employment and revenue.

Vote Up00Vote Down
Caconym
The trouble with that idea is there aren’t enough potential students on the IW to justify it, and what mainland student is going to come over here for their degree when there are two well established universities just across Wightlink Pond of Piracy. They would have to offer vastly lower tuition fees to attract them. You also have the problem of attracting the teaching staff, and the… Read more »
Vote Up00Vote Down
Cynic
IoW University? The mind boggles! Some of us remember the rush to convert Technical Colleges into universities a few years ago. The net result was that prime research (the lifeblood of a uni) was ignored. lecturers became “professors” but still had not published anything to justify the accolade, the growth of non-academic degrees flourished (somebody here called them “fluffy”), degree standards either dropped and/or there was an… Read more »
Vote Up00Vote Down
Simon Haytack

It seems like a long time to you, because it’s most of your life; sadly, it’s a bit less than a third of mine…. so I have sympathy with Cicero in his vagueness.

I’m not qualified to comment on whether educational standards have fallen – obviously, we have some problems here – and I wonder who makes the comparisons and how they arrive at the conclusions?

Vote Up00Vote Down
BRIAN
I too remember when the polytechnics converted to universities. In many cases the quality of the degree courses was satisfactory. Over the years the content of courses – not just degrees- has been dumbed down to accommodate the worsening secondary education system. As a former college lecturer of 32 years experience, I noted with dismay how the content was reduced and the exam questions simplified. For example,… Read more »
Vote Up00Vote Down
Cynic
Well put Brian! One tech msinlsnd college I know well became a “College of Further Education” and run by a person whose claim to fame was lecturing on Silver Service. Not only was the first thing installed was a new “Marketing Dept” run by people who knew nothing about education but also support for academic subjects declined. It now offers “University Level” courses and “Foundation Degrees” but… Read more »
Vote Up00Vote Down
milly

It wasn’t just the red bricks that produced the goods, that is a tad snobbish. The smaller universities did allow more of the poorer working class kids to get proper degrees and stay at home.Some were even better taught than the traditional universities.

Yes- I was one such!

@cicero – the “plate glass” universities are not the new ones. They are the ones created in the 50s such as Warwick and York – unless you think that even such respected institutions are not “real” universities?

@Anon-again. You are correct- my dedinition was not. What term should be used for those 35 created in the last 13 years? (BTW York and Warwick (in particular) have my respect for particular subjects taught by leaders in their particular fields.)

Is not that the problem with an IoW “university”. How would we attract such oputstanding academics to the Island?

What is the source of this statistic?

Vote Up00Vote Down
Colin
Whilst university education may be suitable for some, it is not suitable for all. For a number of years the benefits of apprenticeships have been ignored and it is only lately that the government has actively encouraged this route into work. Does the Island need a more unversity educated workforce? Have people cottoned on that a university education isn’t the be all and end all? Many may… Read more »
Vote Up00Vote Down
Caconym
Well, I have a degree, and I certainly didn’t treat it as a “jolly”. It got me an damn good career which pays extremely well. As to the availability of work? It really depends on the degree you take. Take an engineering, business or science degree and your prospects are good. Take one of the more “fluffy” subject and you could well end up flipping burgers. The… Read more »
Vote Up00Vote Down
darrenbishop98

Cicero i have to agree with your expression of fluffy!
I can’t help but laughing in the face of friends choosing to study subjects like the arts and theatre beyond GCSE! its absurd! education is about finding career and job not learning about acting or painting, theres no money in it! FLUFFY

Vote Up00Vote Down
Cynic
Wrong! Education if about “education” not finding “a career job”- that is “vocational training”. Education is about teaching people to think for themselves, ask questions, research problems for potential solutions. “Vocational training” is the policy that led to technical colleges in the past, most of whom have been converted into universities offering fluffy degrees that are often worthless in the job market when competing with degrees in… Read more »
Vote Up00Vote Down
Caconym
Well, you are partially correct when you say that a university education is, in effect, training you to think. It IS, however, about getting a job. A job where you are paid to think for yourself. By “technical colleges” I assume you mean Polytechnics? The ex polytechnics do not offer any more “fluffy” degrees than any other group and generally concentrate on what was previously their core… Read more »
Vote Up00Vote Down
milly
Not allowing working class kids to achieve at the highest level is tantamount to turning the clocks back. There was a time that communities were proud to send their one bright child to a university. The ruling elite want to go back to the dim days where only they would have an education. That’s why they are messing up our schools and stifling opportunity.That’s why fees have… Read more »
Vote Up00Vote Down
Island Monkey
‘University for 50% of our young people’ was just another mad Labour idea. Many of the courses were pointless, golf course management, photography, media studies, fabrics? I bet you can think of another dozen examples. The poor little darlings enjoyed the drunken years away, but frankly the qualifications they came home with were not worth the paper they printed them on. What most kids mostly ended up… Read more »
Vote Up00Vote Down
Robert Jones
If not to university, where are they going? Into work, onto benefits, into apprenticeships? I would certainly be worried about the low rate of university admission if these students were going straight onto the dole, but are they? A bit more information would help. I don’t share the obsession with university places for all – if people want to go and can benefit from it, then they… Read more »
Vote Up00Vote Down
Cynic
Go to university these days and get a debt the size of a house deposit- £30000+ for one of my grandchildren. My education was state-funded. BTW the £12 billion Student Loan Book was to be privatised by Osborne until Vince Cable refused. But if Tories win the next election, Cable will be long gone…and then? Then there is the problem of retrieving student loans from overseas students… Read more »
Vote Up00Vote Down
Caconym

I believe that overseas students do not qualify for loans in the first place. They have to pay up front. The problem is getting UK students who move overseas to work to pay.

“You may also be eligible if your residency status is one of the following:

EU and some other students do qualify for UK grants

Vote Up00Vote Down
milly
Where’s the vision? Where’s the ambition? “Can’t do it”, Can’t have a bridge, can’t have a tunnel,we’re too small, they won’t give us the money.We’re a micro-economy. Sorry but ‘yes we can’ if we want. What is the population of the island? how does it compare with other constituencies that have universities and are not cities? Most polytechnics were turned into universities in the 80’s. Companies and… Read more »
Vote Up00Vote Down
Vix Lowthion

Are we any further in finding the proper source of this 27% statistic? Because that would mean only 1/4 of our sixth formers are going to university, and that is a very surprising number, as many many more than that apply.

We understand the paper with all the stats would be made public on 15th December assuming the Executive agree to go ahead with the consultation at tomorrow’s meeting.

Ok. Maybe the IW has declined massively in recent years. But we don’t have 2014 data yet. The most recent data appears to be in this table, conveniently by Parliamentary constituency, and has the IW at 47% of KS5 leavers going to a UK HE destination. Sadly this is below the national average of 54% but I cannot find anything like 27% in this data?

Possibly. My device wasn’t the best at reading that table! What’s the national average drop out?

I think that Key Stage 5 data is not merely A Levels either – lots of BTEC and Access courses would be linked in these stats.

Has anyone found this 27% figure yet?