As well as the news about the train line, Ryde Society reports the MP called Pennyfeathers development “unsustainable” and said Isle of Wight councillors should “man up”. Read on for full report. 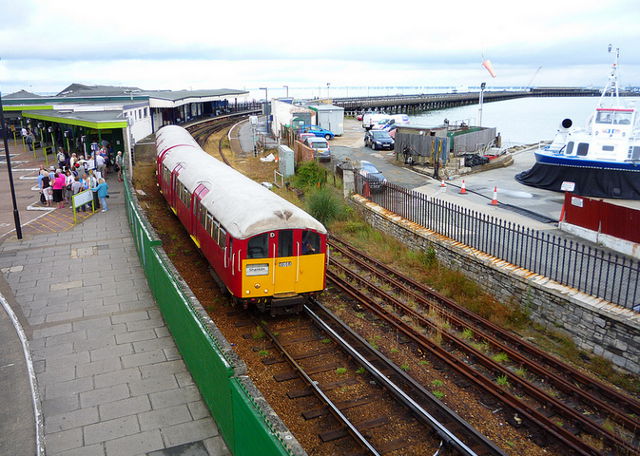 Peter shares this report on behalf of Ryde Society from Saturday’s meeting. Ed

Ryde Society report Isle of Wight MP Bob Seely said he expected a Government announcement of plans for a £60 million upgrade to the dilapidated Island line railway and Ryde pier within the next few months.

(Ed: When OnTheWight contacted Bob Seely to get the detail on this, he responded, “This is not accurate”, claiming the figures and the timings were wrong. The figures and dates are what two people at the meeting tell us they heard – one from a recording and the other from shorthand notes. We’ve asked the MP what he thought he’d said.)

He told a packed meeting of the Ryde Society at the Esplanade Hotel on Saturday that it would be the “first proper investment in the line for fifty years.”

MP’s vision for train line to Newport
In a keynote speech highlighting his vision for the Island and his opposition to over development.

He also said he was trying to get Isle of Wight Council to agree to a railway line between Ryde and Newport.

National Park status
Mr Seely called for the Island to be made a National Park, as suggested by writer JB Priestley back in 1959.

“The more we build on our landscape the less worth we become as a visitor attraction.”

“The Isle should be protected from underhand developers.”

“We must look forward to October when hopefully it will be a done deal.”

Seely: Pennyfeathers development “unsustainable”
Mr Seely said that the Island’s beautiful landscape makes it “the most painted part of the UK apart from West Cornwall”, and tourism accounts for between 20 and 50 per cent of the economy.

He slammed as “unsustainable” the proposed Pennyfeathers development for 900 homes on a green field site on the outskirts of Ryde.

“They don’t have infrastucture for so many houses.

“There is no public transport so people would have to depend on their cars.”

Mr Seely called for more housing for the young to keep them from leaving the Island.

“I know I’m a Conservative, but the answer is more council housing. But it must be in the towns where there is infrastructure.”

“We need one and two bedroom homes built in town centres on brownfield sites”, he said, rather than the three and four bedroom houses developers are keen to build on greenfield sites.

However, Mr Seely – while he acknowledged there may have been “some fairly stupid housing decisions” – said he had seen no evidence of corruption.

Bit like the £20bn promised over a year ago for the NHS then.

More jam tomorrow promises from a Party full of liars.

A reminder that about £3 billion of taxpayer’s money was wasted (or spaffed up the wall, in PM Boris speak) by the party’s master of disaster transport minister Chris Grayling until his recent overdue enforced retirement.

Chris Grayling in The Guardian

And bob …… just telling people what they want to hear !

Vote Up10-2Vote Down
Highway to Hell

£60 Million? Well, after you remove a good few consultancy fees, some overheads and profit, that should leave just about enough for the Grand Opening Ceremony.

Ryde to Newport link ? How’s that going to work ? I know… All round the coast from Ryde, anti-clockwise to East Cowes, then down the Medina. That would be a massive visitor attraction…( tongue in cheek)

Vote Up3-4Vote Down
greenhey
While £60m might sound like a lot it is in fact suspiciously low. Especially if it would be meant to include a Ryde to Newport link. The power and rolling stock units in use now are something like 70 years old, and are ex-underground stock.As I understand it that source of replenishment is finished as stock now in London and in Merseyside ( where third rail is… Read more »
Vote Up2-3Vote Down