Review: A night of decadence with the Gothic Circus

The Gothic Circus Big Top promised a feast for the senses on Friday 13th, with an array of jugglers, aerial hoops, sideshows, fire performers and freak show acts performing alongside the bands and burlesque stars. 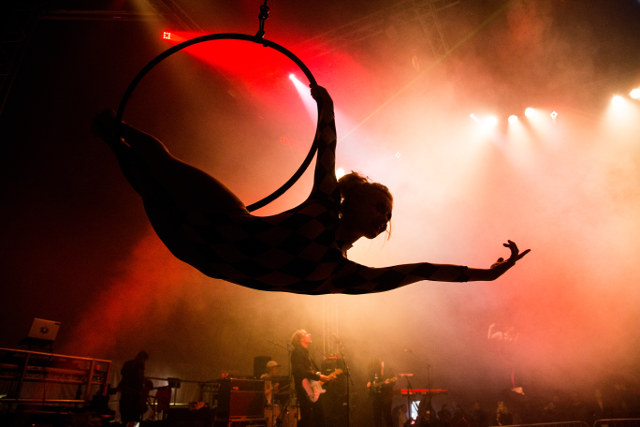 Thanks to Rachel Rocks for this latest review. Ed

Friday 13th was the perfect date for the Island’s first ever Gothic Circus.

Greeted into the Big Top by a vaudevillian stilt walker, tonight is a feast for the senses, visually tantalising like a dark, steampunk fairytale.

An array of jugglers, aerial hoops, sideshows, fire performers and freak show acts perform alongside the bands and burlesque stars. 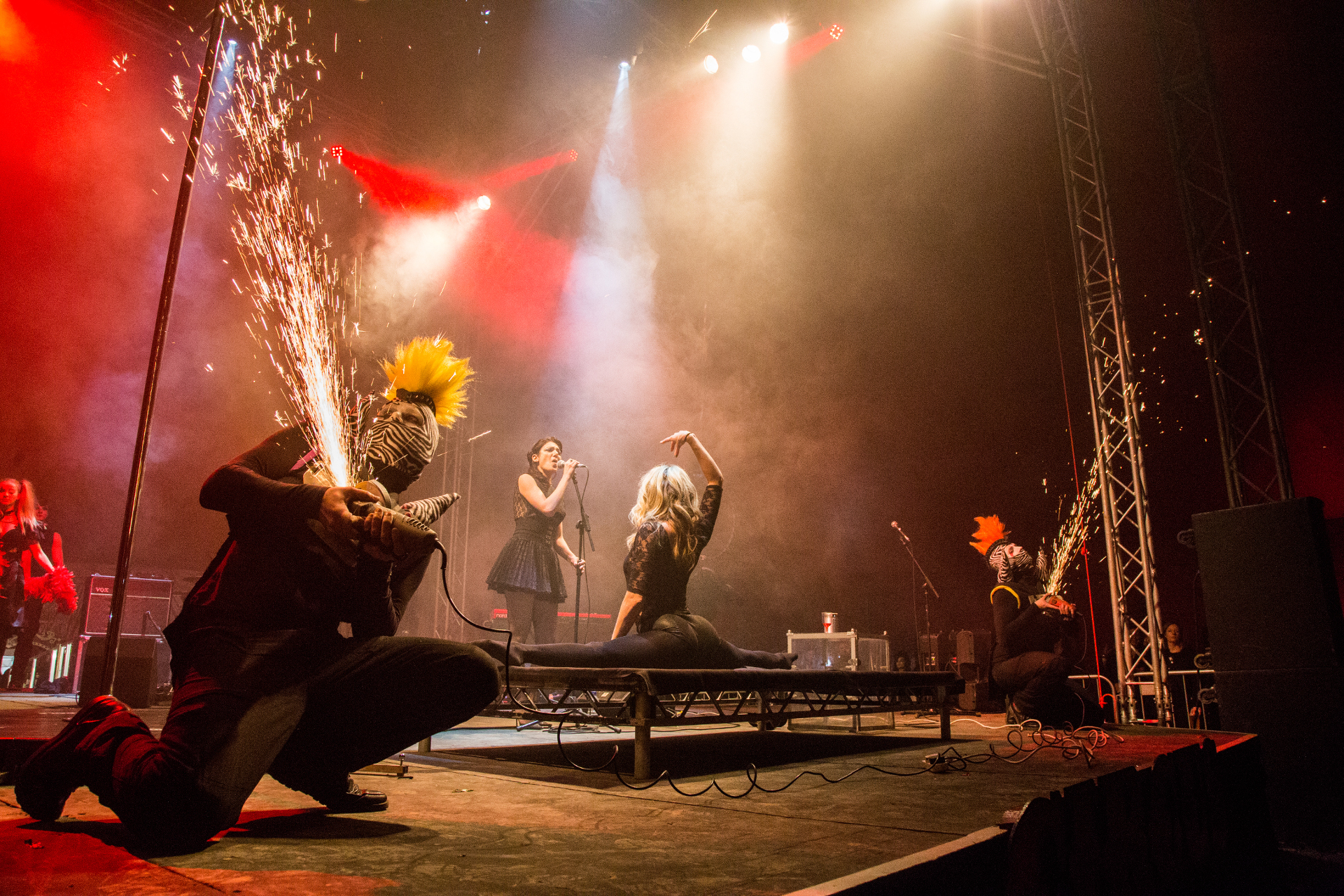 Black lace, top hats and lashings of eyeliner fill the big top. Everyone has made the effort to dress in spectacular gothic style during an evening for those who prefer their entertainment on the dark side.

The first half of the Gothic Circus is dedicated to music with sets from ethereal, enchanting Echo Wants Her Voice Back and a rousing sing-a-long flaming bagpipe fuelled performance from Wight Hot Pipes. 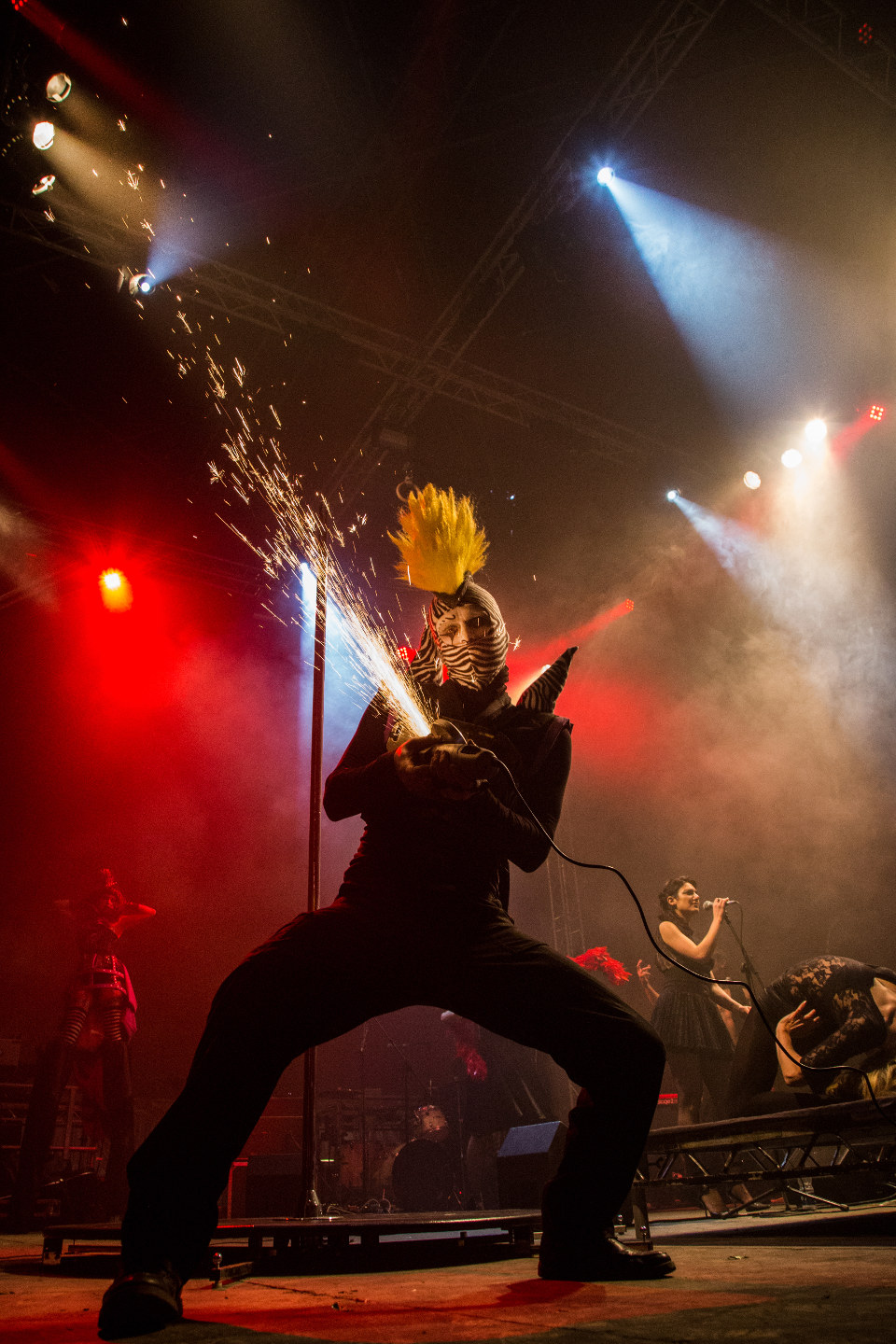 Mr Strange, the genius misfit vocalist wears his Beetlejuice style black and white striped blazer, with his blonde wig and beguiling eyes. Those mysterious, captivating eyes… Dare you look into them?

With his elaborate, spooky makeup, he really is a vision and it’s great to see the former singer of The Shanklin Freak Show back with his incredible stage presence and charisma! 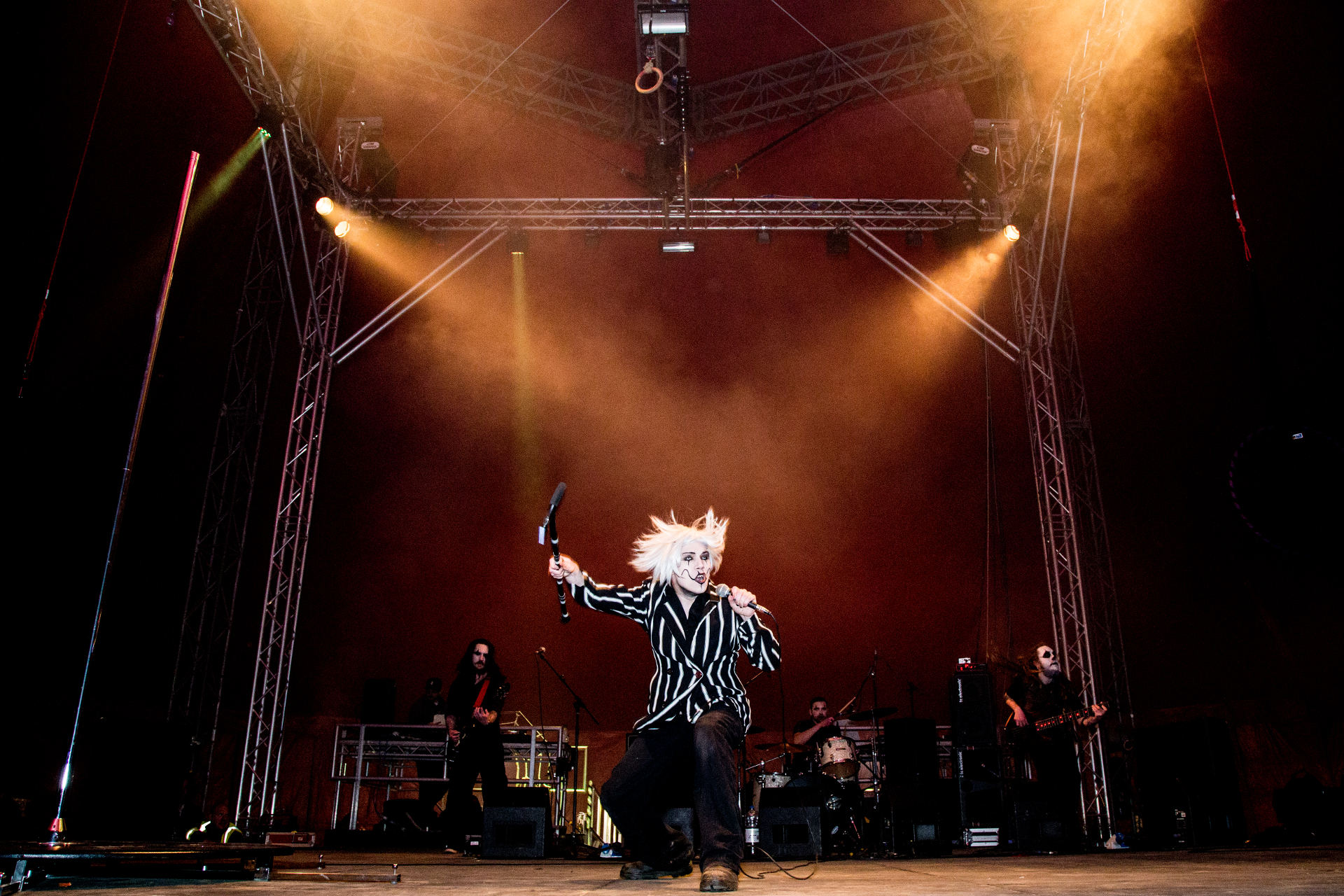 Mr Kronik on bass laughs manically away, like a steampunk zombie clown with his swinging dreads. Is he laughing with you or at you? Be afraid!

The funky beat of “The Lizard Man” has everyone dancing away in a gothic groove.

Island gorlesque, burlesque favourite, Ravenna Grimm known for her gothic horror routines, takes to the stage with her hands covering her face. 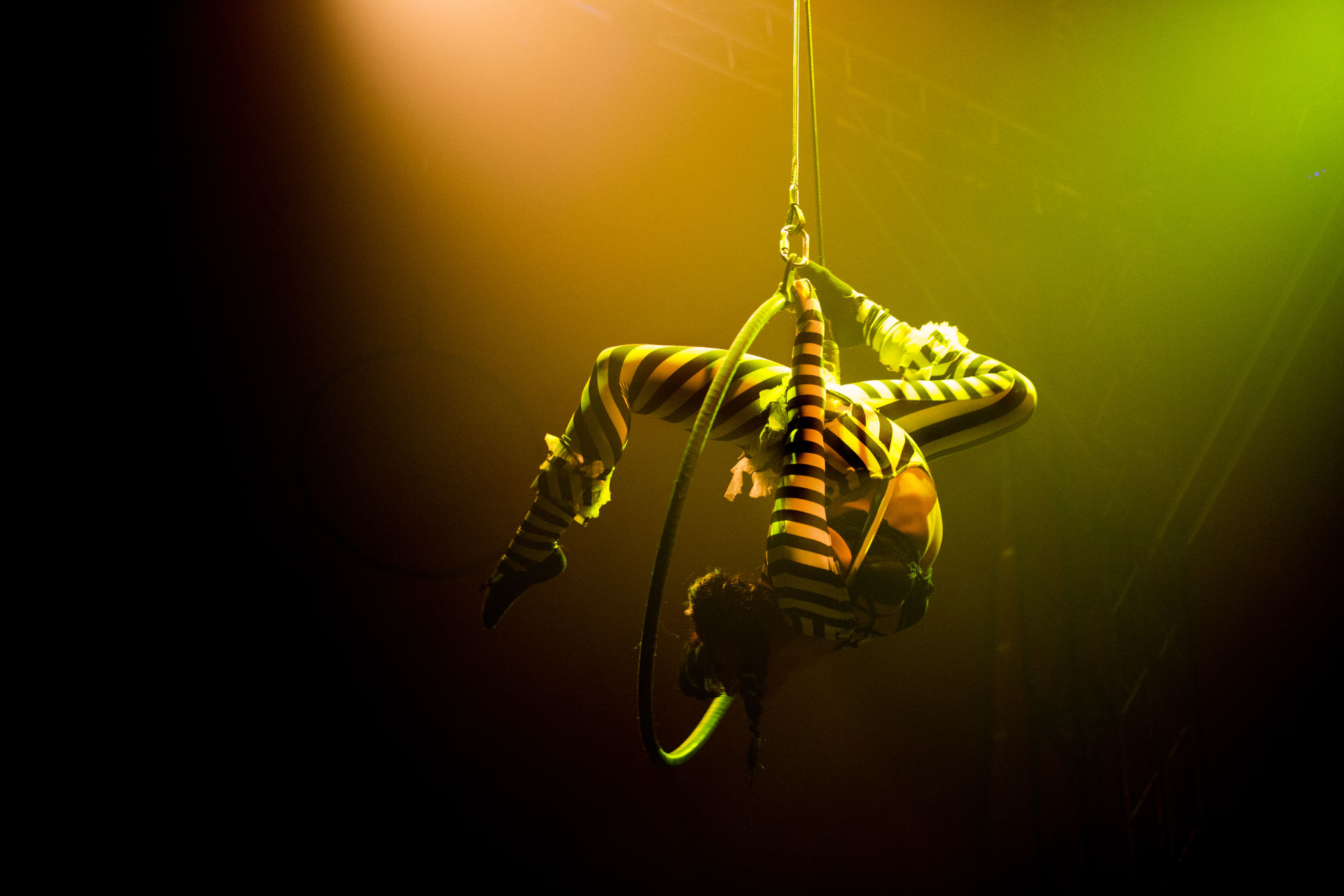 She portrays a surreal, shy, cartoonesque clown character with a cute red button nose. Wearing a yellow raincoat with the hood up, black and white knee high socks and a bright orange wig and tutu.

As Pink’s ‘Funhouse’ plays: “This used to be a funhouse, but now it’s full of evil clowns”, Ravenna pops her balloon. It explodes with blood which she smears over her tiny, petite body. Her dramatic facial expressions and quirky hand movements enhance her phantasmagorical routine.

Elegantly stunning and graceful as she seemingly floats through the air, supported by her silks to the sound of Marilyn Manson’s eerily haunting version of ‘Sweet Dreams’. 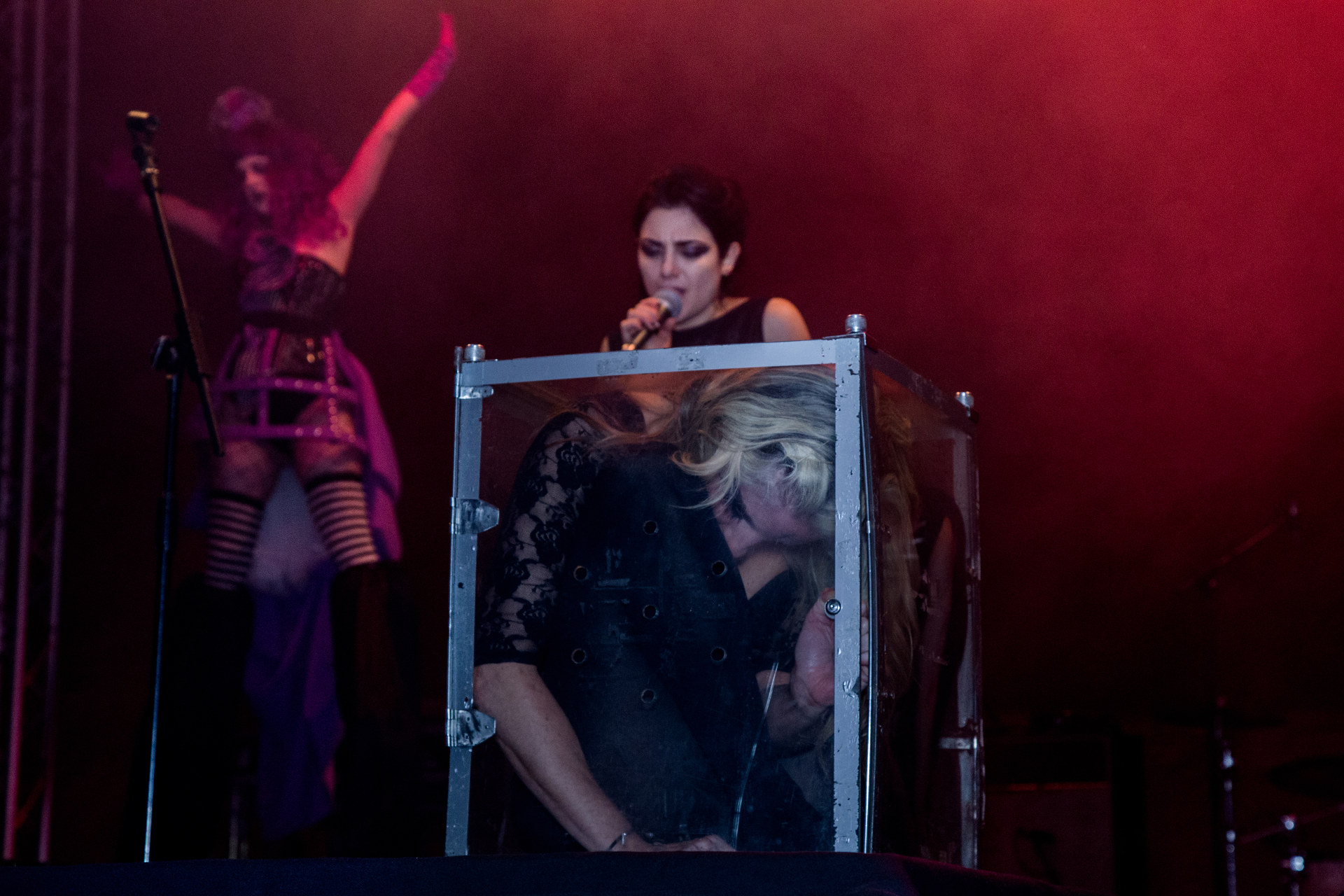 Then it’s the moment that everyone has been waiting for. The mood heightens in intensity and anticipation for Skinny Redhead’s pioneering rope self-suspension appearance.

Two burlesque performers set fire to the front of the stage!

Riding above the flames
Skinny Redhead makes her grand entrance as celestial, choral music plays and she strides in wearing monk’s robes and black PVC boots.

She knots herself onto the rig and elevates to the full height of the big top, above the flames where she disrobes spectacularly. 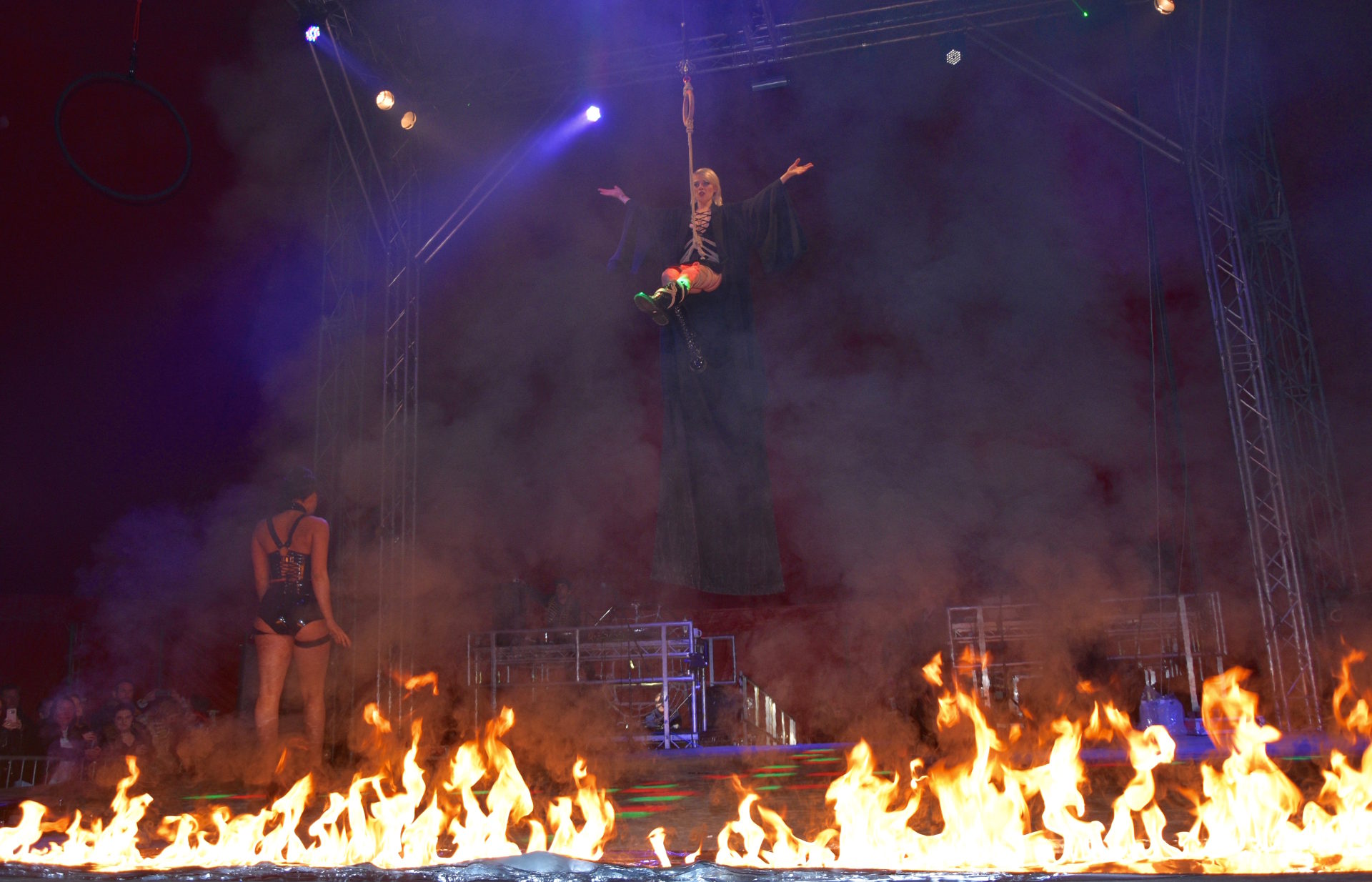 As she allows herself to fall dramatically, she knots one leg back into the rope in a double jointed fashion and floats back up, her blonde hair like a halo as she rides above the flames.

Into the night
The Gothic Circus continues until the early hours with DJs and dancing.

The good news is the night is such a success, that organisers Dino and Arina Joachim are planning an even bigger event for 2019!

“We had a lot of great feedback and are looking forward to coming back next year for a three-night Festival!

“We loved the fact that we made so many people happy and brought them entertainment that amazed them!”