Great fun for all on Sunday as the Lashing All-Stars brought their team of international cricketers and unique brand of T20 entertainment back to Steephill. 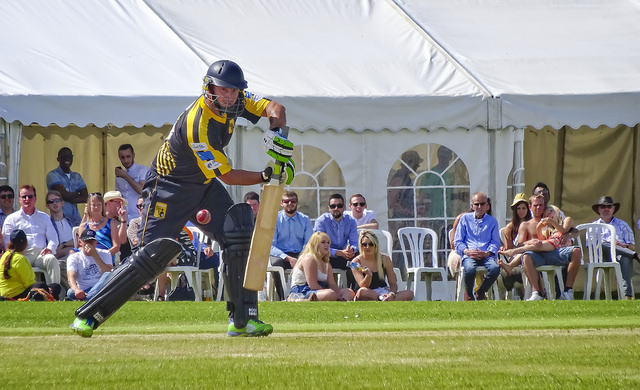 A crowd of 600 and the commentary of BBC Test Match Special legend Henry Blofeld made for a memorable occasion as Lashings All Stars brought their team of international cricketers and unique brand of T20 entertainment back to Steephill on Sunday.

The youthful hosts were a given a rapid start by Pierre Kriel (16) who struck several fine boundaries in the face of a quick opening onslaught from Tino Best before the West Indian had the last word. Hugh Calloway made 36 and Alex Glendenning a classy 63 before Monty Panesar and Martin Bicknell ensured the All Stars emerged comfortable winners by 66 runs.

Dan Cox and Wasim Jaffer were presented with man of the match awards to bring a terrific event to a close.

Lashing coaching for under 11s
Earlier in the day, Ventnor’s wide eyed under 11s were treated to an hour’s coaching led by all the Lashings players and their coach Gordon Greenidge, the great former West Indies batsman.

The Club extend grateful thanks to all those who contributed to such a successful day.

Alex Glendenning (56), Ben Herridge (40), and Rob Snell (36) led their side to 213-8, but a disappointing bowling display meant the visitors romped home with ten overs to spare.

More positive news
There was more positive news from the second team, who all but secured their Hampshire League Division 1 safety with an excellent eight wicket success at St Cross Symondians III.

Set to score 272, two superb unbeaten innings from Ben Attrill (73) and Martin Blackman (72) saw Ventnor to a crucial win after James Attrill (43) and Pierre Kriel (29) had given their side a solid platform.

Arthur Halsey took 4-22 as the visitors were restricted to 134-9, a target the hosts reached for the loss of only two wickets, Mark Price making 53 and Jason Boulter an unbeaten 40.

Image: donnatomlinson under CC BY 2.0