Arrests made in week of action against county lines drug dealing networks; with drugs, mobiles and cash seized 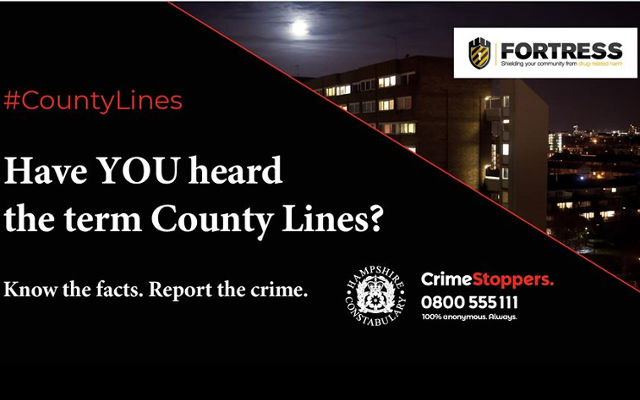 Between 7 and 11 October, specialist officers carried out warrants at properties linked to drugs and pre-planned operations to disrupt and deter offender from county lines activity. During the week long activity 52 people suspected to be involved in county lines drug dealing were arrested.

Isle of Wight focus
On the Island there were:

Engaging stakeholders
The term ‘engaged’ refers to Police officers have taken the time to go into hotels, taxis firms, schools, etc to talk to them about what county lines is and how they can help by spotting the signs of county lines activity in their working environment and notify the police – it’s part of their safeguarding remit and they are stakeholders.

Police officers also highlight the types of signs to look out for a vulnerable or a young person who maybe being exploited for county lines activity or sexual exploitation to pay off drug debts etc.

“We conducted a number of activities during the county lines week on the Island aimed at disrupting and dismantling drugs networks, who seek to exploit young and otherwise vulnerable members of society through violence, fear and intimidation.

“This resulted in the arrest of six persons for drugs supply, seizure of drugs, six mobile phones. No weapons were found connected to  this activity.

“In addition we safeguarded a number of vulnerable persons through visits and referrals to other agencies.”

Coordinated by the National County Lines Coordination Centre, results in our Hampshire and Isle of Wight region resulted in 48 men and four women being arrested, with another 20 vulnerable adults and children were safeguarded to protect them from further harm.

What is county lines?
County lines networks are notorious for exploiting vulnerable or young people into becoming couriers who transport drugs from London into our towns and cities, with orders taken by phone.

Suspected dealers texted
Text messages were sent to hundreds of suspected drug users on four drug deal lines, two of which believed to be operating in the Portsmouth area, were shut down, as part of the week of action.

The messages directed users to support agencies while also making dealers aware we knew what they were using the number for.

‘Cuckooed’ properties visited
In addition, properties were visited during the week which were thought to have either been previously cuckooed (ie. dealers taking over properties of vulnerable people to deal drugs) or believed to be at high risk of being cuckooed in the future .

Meanwhile, talks were also given to schools and partner agencies to raise awareness of county lines across the region.

“We are committed to dismantling these networks and protect the young and vulnerable people who are exploited by criminals and are subject to violence, fear and intimidation.

“This week will have been successful in disrupting the violent crime that is inherent in county lines activity, with conflict between competing drugs supply networks and the associated violence used to control vulnerable youngsters and dealers. Our policing activity has intervened in dealers taking over properties of vulnerable people to deal drugs known as cuckooing.

“The public have the power to stop drug dealing networks causing misery in their communities by being the eyes and ears of our streets and spotting the signs of county lines and cuckooing. If you spot any of these signs you can speak to local police on 101 or call 999 in an emergency. If you’d rather stay anonymous you can call the independent charity Crimestoppers on 0800 555 111.”

While the revenue generated by individual lines will vary, many will generate around £3,000 per day, and in some cases this can rise to around £5,000 daily. The NCA conservatively estimates the annual national value of drug lines in the UK to be approximately £500m.

Mackechnie: “We all have a part to play”
Detective Superintendent Scott Mackechnie, who leads the response to drug-related harm at Hampshire Constabulary, said:

“Tackling county lines and the misery it causes to our communities is an absolute priority and these results demonstrate the power of a coordinated response with our partner agencies to a complex problem that we’re seeing in every area of the UK, not just in Hampshire.

“We play our part alongside staff working within health, social care, education and commissioned services to try to stopyoung people being drawn into county lines and keep watch for signs that young people they work with may have fallen prey to a county lines gang.

“Youngsters who suddenly have new and unaffordable belongings, go missing a lot, have friendships with older people or have unexplained injuries are all said to be possible victims.

“Supply networks are responsible for high levels of violence in addition to the exploitation and abuse of vulnerable adults and children. We all have a part to play in diverting children or vulnerable adults from getting involved in the first place.”

“If you have any information about people you are either being exploited by a network or directly involved in the supply please contact us. Alternatively you can contact Crimestoppers on 0800 555 111.”

Get in touch
If you are a young person who is worried about being involved in County Lines, or knows someone who is, you can speak to an adult and let them know how you feel.

You can also contact www.fearless.org who allow you to pass on information about crime anonymously.

You can also contact Childline on 0800 1111 – they are a private and confidential service where you can talk to counsellors about anything that is worrying you.