More than 10,000 women in the Isle of Wight constituency have been negatively impacted by the State Pension age changes as a result of the lack of notification by the Government 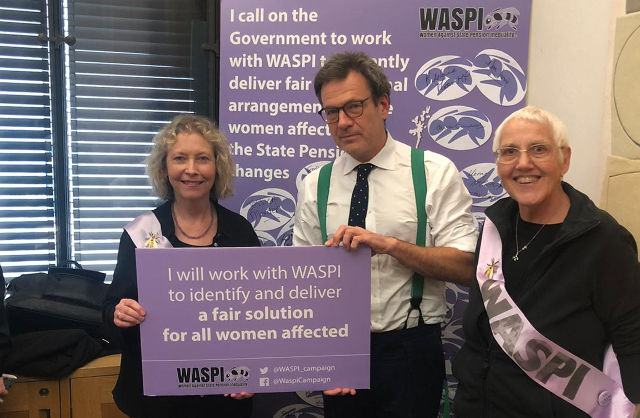 Isle of Wight Conservative MP, Robert Seely, has met with local Women Against State Pension Inequality (WASPI) representatives Shelagh Simmons and Sally Robinson in Parliament and pledged his continuing commitment to fight for a fair transitional State Pension arrangement for all WASPI women.

Shelagh and Sally were representing the Solent WASPI Supporters’ Group and on Wednesday 16th October joined others taking part in the WASPI lobby of Parliament that saw over 20 of them gather to call on the Government and MPs to commit their support to helping find a solution for WASPI women.

As part of the event, Mr Seely pledged his support for a better deal for WASPI women.  This calls for:

“I am delighted Mr Seely signed WASPI’s pledge to demonstrate his ongoing commitment to WASPI women.  More than 10,000 women in the Isle of Wight constituency have been negatively impacted by these State Pension age changes as a result of the lack of notification by the Government.

“Some are suffering financial hardship.  Others have poor physical and/or mental health.  All have been treated unfairly.

“Bob Seely has spoken out on this issue in the past so Island WASPI women will be very pleased their MP is continuing to fight to ensure they get the deal they deserve.”

The lobby event in Parliament was convened by WASPI, a group campaigning for approximately 3.8 million women born in the 1950s who were affected by changes to their State Pension age implemented in the 1995 and 2011 Pension Acts.

Bob ‘love bombing’ his voter base ahead of the GeneraL Ejection

JS – obviously not a woman affected by the promised State Pension payments being delayed by six years or more – otherwise you would not be making that sort of comment.

No I’m not affected YJC, but I know who’s been in power for the last 9years.

Johnny come lately, Mr Bob Seely doesn’t fool anyone with his pretence of concern ahead of a GE

JS – you obviously do not realise that Bob Seely has supported the Isle of Wight WASPI women for well over two years and actually spoke for over five minutes at a Parliament debate against his own government.
This was a huge thing to do as a new MP.

He has been hugely supportive.

There is a saying “ there’s talkers who say a lot and do nothing, and people who actually do something I think you get my drift.