If you’ve wondered what the Isle of Wight MP thinks of the idea of a fixed link to the mainland, OnTheWight has the answer.

Read and contribute to the 35 readers' comments ↓ 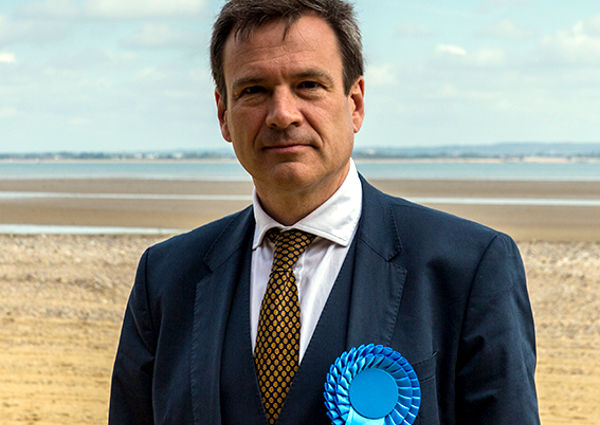 At the recent Isle of Wight Literary Festival, the Island’s Conservative MP, Bob Seely, took part in a politics panel.

The Sunday afternoon session gave a fascinating insight into the views of the four panelists on a variety of subjects, from Brexit to Artificial Intelligence (AI).

Who’s for a fixed link?
A member of the audience asked the panel whether their travel across the Solent had influenced their views on a fixed link to the mainland and what effect it could have on the economy, education and NHS.

Bob Seely was the first to respond, stating categorically that he is against it because, “it’s just not going to happen”.

He said a fixed link would cost in the region of £3bn and “we don’t have money”.

Fixed Link “not a panacea of all”
Bob went on to ask, “Do we want to entirely change the Island?” adding that a fixed link would not be “panacea of all”.

The MP finished by saying there are a number of other projects he’s working on to improve the Island and that he’d prefer to spend his time on helping those happen, rather than “this airy fairy” idea.

Other panelists
Journalist, Polly Toynbee, explained that as she was born on the Island (but left when she was three years old), she understands the subject is a ‘great divider’. She went on to say that if “the country makes the error of leaving Europe”, perhaps Islanders will want to declare independence for the Isle of Wight.

Former leader of the Conservative Party, Michael Howard, explained he couldn’t add to what Bob had already said, but pointed out that Red Funnel were the headline sponsor of the Literary Festival – which after a moment of reflection, raised a few chuckles from the audience.

Journalist, David Walker, briefly stated that his travel from Southampton “was a pleasant experience”.

BBC Tweeting there too
OnTheWight weren’t the only media in the room. The BBC’s Jessica Parker was also there

He claims his ferry fares on expenses. Honestly this bloke is a Daily Mail readers wet dream isn’t he? Keep the serfs down and tally ho!

What Bob hasn’t bothered himself to find out is that his own Government has set aside £ 483 Billion of infrastructure funds of which we require just £ 3 Bn.

where are you getting £483 billion from? I can see under 40% of that from the government but the rest from private funds and covers a wide range of projects from a lower Thames crossing to house building is this like the £350 million a week for the NHS ?

Just because money is apparently there for infrastructure, doesn’t mean anyone who asks will get some of the pot. Has to still be viable….

He who shall not be named in “I know which side my bread is buttered” shocker.

Don’t hold your breath waiting for any of his “other projects” though. I suspect the pipeline will be very long, contain a large number of blockages and will, ultimately, end up down the drain.

Interesting that he isn’t addressing the major issue of tbe ferries. Leveraged to the gills with debt, purchased by pension funds who see a certain income stream from our captured market.
Fix the ferries and his other schemes and wheezes might have a chance.

Sooner or later these debt laden ventures will come crashing down. Then we will see a real crash rather than just the comparatively minor blip the banks caused. That is why I am against the IWC joining the fray with £100 million of borrowed money to do the same thing with property that others are doing with the ferries.

Looking at his twitter account I found this: “Interviewed by St Mary’s Hospital’s Sunshine Radio at Westminster. We talked about issues like NHS funding and the cost of being an Island.”

Do let us know more, or is it just soundbites that are important?

So – he won’t support a fixed link. Is he likely to support the regulated ferry fares he promised in his election statements, as long as we pay his travel expenses.

Vote Up9-2Vote Down
catowner1
Turner spent years ignoring the ferries whenever he wasnt seeking re-election. The only times he publicly campaigned for fair ferry fares was before elections, and even the OFT dropped it after he got re-elected. I would have no surprise at all if Seely were the same. The next we will hear about the ferries will be in about 3 years time, unless May bites the bullet and… Read more »
Vote Up6-5Vote Down
Black Dog
Clearly Mr Seely is not open to debate, he appears to have formed a view and that is that. Let us all hope that the electorate also form a view and vote him out the next time around. Mr Seely, exactly how are you representing the Island? You appear to be oblivious to the impact the ferries have on absolutely everything that happens on the Island (Education,… Read more »
Vote Up12-5Vote Down
rick70

The person that the F/L campaign were pushing for to become our MP in the last GE, came last, so maybe Bob Seely is listening to he’s electorates.

Vote Up6-7Vote Down
catowner1
The person running for the Tories in the last GE made homophobic remarks to school children. Bob Seely was a last minute replacement who thinks real ale pubs are important but doesnt have anything to say about food banks, and who now seems to think that because a fixed link would be a challenge, its not worth bothering with. Listening to his electorate? No – he will… Read more »
Vote Up10-4Vote Down
rick70

I should of said that Bob is listening to he’s electorate in relation to this topic.
If, as we always hear from those stating that a F/L is a priority for so many of us Islanders, and if it is the answer to all of our supposed unique issues, why did the person pushed by the F/L campaign to become our next MP come last?

Vote Up6-6Vote Down
Nitonia
The electorate is split on a fixed link and unless there were a referendum we’ll never know what kind of split it is. No politician would dare state openly that they were definitely in favour or against a fixed link in a run up to election, instead they’ll use weasel words that say little and effectively put them on the fence. Once elected though they can say… Read more »
Vote Up10-1Vote Down
rick70

But my argument is, that if as the F/L campaign states, that the majority of islanders want a F/L , why did the person they wanted as our MP ( so I would assume was in favour of one ) come last?
In my opinion, that split you talk of, is not as great in favour of a F/L that some may claim.

Vote Up6-5Vote Down
Black Dog
My comments relating to Mr Seely are not about the pros or cons of a FL but one of not listening or representing everyone. Dismissing the idea of a FL is one of the worst bits of negotiation I have ever witnessed. It is like going into battle without any bullet and then telling the enemy you don’t have any bullets!! In my opinion this ammounts to… Read more »
Vote Up60Vote Down
rick70

But does he gain by being open about he’s view on a F/L?
And is he the only MP that is against the idea?

Should of said “what does he gain by being open about he’s view on a F/L?

And was he the only prospective MP with this view going into the recent GE?

And another question, what does he gain about stating that money isn’t there for this project?

Vote Up1-5Vote Down
catowner1
“if as the F/L campaign states, that the majority of islanders want a F/L , why did the person they wanted as our MP ( so I would assume was in favour of one ) come last?” Because the Fixed Link is not the only issue facing the island. “Should of said “what does he gain by being open about he’s view on a F/L?” Nothing –… Read more »
Vote Up1-2Vote Down
rick70
I thought this was about he’s views on a fixed link? If a fixed link will make us all richer, as some would have us believe, no need for food banks and he will be the hero. If a fixed is not built , and we will all be much poorer, the island will not continue to be the Tory safe seat it is now. Only one… Read more »
Vote Up1-4Vote Down
Black Dog
Not quite so simple. Life is about choice (Freedom of Choice) Islanders should have the right to choose whether they travel by ferry or road (if the FL is a bridge or tunnel) While some might measure wealth in sterling terms others would consider themselves rich because of their education, health, employment opportunities, etc. All of these are limited by the ferry companies choke hold on the… Read more »
Vote Up4-2Vote Down
rick70

It is that simple.
And yes everyone has a choice if Island is for them.
And I would say that employment opportunities creates wealth, again he would be the hero if one was built.

Something doesn’t add up.

This guy is just like the rest of his party, completely out of touch with the real world

I’d also like to hear about who the other members of the panel were and what their opinions on this, and the other topics discussed, were.

Though we all know Seely’s opinion on Brexit, of course.

I’ll add the other comments in relation to FL a bit later today (they were brief) and plan to run other articles on some of the other subjects.

Good old Bob. Has no idea whatsoever about the Fixed Link scheme information and refuses to meet to discuss it.

There is a great deal of response to this article on this link: https://www.facebook.com/groups/iowfixedlink/permalink/1343863992391124/

Yes, a great response, looks like everyone is in favour of a fixed link. Yet on the OTW article no body wants one. Strange how when blocking opposition/free speech or opinion from FB groups skews the ‘response’

I wonder if he’s made his decision based solely on the ‘pro-links’ behaviour and attitude? I certainly would back the idea when they are at the supposed helm either