Wightlink’s deck officer is is one of 19 people who’ll receive the Merchant Navy Medal for Meritorious Service for going above and beyond in their service to the maritime industry. 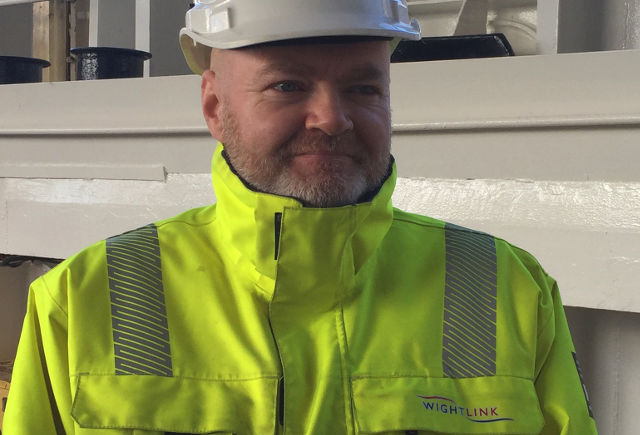 Wightlink Deck Officer Steve Chamberlain, who jumped into freezing waters in Portsmouth Harbour to save a man’s life, will be awarded the UK’s top maritime honour for his bravery.

He is one of 19 people who will receive the Merchant Navy Medal for Meritorious Service later this month for going above and beyond in their service to the maritime industry.

The rescue
The rescue happened in The Camber at 11:00pm on Saturday 3 February 2018. The crew of St Clare was working on board the ferry’s car deck, which was moored at her berth, when they spotted the man struggling in the water and threw a life ring.

When Steve realised the drowning man couldn’t reach the flotation device he jumped in, swam across to him and kept his head above water until colleagues arrived in a launch to help.

“Our merchant navy is crucial to keeping the UK thriving … these people are a credit not just to the maritime industry but to the wider nation. They have gone above and beyond their duty for the benefit of others.”

Steve: “I just acted instinctively”
Steve lives in Portsmouth and has 20 years’ service with Wightlink and five years with the Royal Navy. At the time he said:

“I just acted instinctively when we saw the man wasn’t able to get into the life ring. We carry out emergency drills all the time but it’s different when it’s happening for real. Getting the man to safety was team work and I’m grateful to my fellow crew members for their support.”

“We are all tremendously proud of Steve and delighted that his heroism has been rewarded by the award of the UK’s top honour for bravery. He is a worthy recipient of the Merchant Navy Medal.”

The medals will be awarded by Her Royal Highness the Princess Royal, at a ceremony in Trinity House London on Wednesday 26 September 2018.