Steve Jones believes there is a direct link to roadsides being sprayed with herbicides, such as Roundup, and the loss of Ventnor wall lizards. OnTheWight has been in touch with the Isle of Wight council. 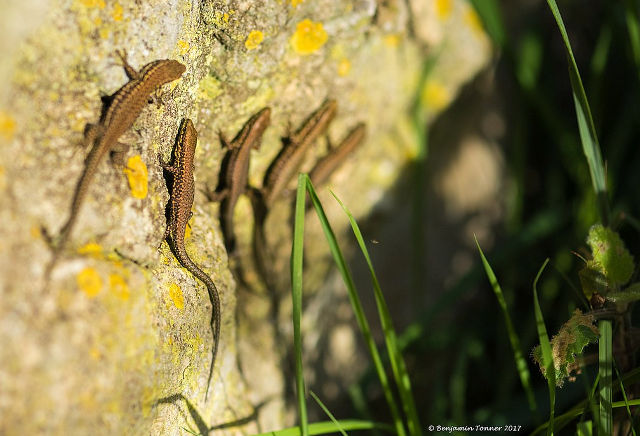 A call for a temporary ban on herbicide spraying by Island Roads in Ventnor and the Undercliff is attracting growing support from nature lovers.

Alerted Island Roads and MP, but spraying continues
In the Isle of Wight Nature Group (a closed group so you will have to join it to read the responses) he stated:

“About ten days ago I found another dead wall lizard at the base of a wall with desiccated plants, hours after Island Roads had once again been along with their herbicide sprayers.

“I’ve alerted Island Roads and the MP to the issue, but still the spraying continues.”

“Toxicity of e.g. Roundup to reptiles is not routinely tested. Island Roads is spraying ‘blind’, but with strong circumstantial evidence I believe they’re wiping out wall lizards and, of course, the invertebrate-rich plant communities upon which they depend. And, of course, these same habitats are occupied by slow worms, common lizard (rare here), grass snake and, locally, adder.

“I’d like to see a moratorium on herbicide spraying on street walls in the Undercliff at the very least, if not Island-wide, pending toxicology tests.”

“When they started herbicide spraying (only 3-4 yrs ago) we had mature, low stature flowering perennials – just what you would expect on such dry stone walls/verges. These have been replaced by annuals of far less value, which they now have an excuse to spray perpetually, and these are less able to bind soil, causing it to wash out of the gaps.”

In August 2018, the Isle of Wight council said they would continue using glyphosate-based weedkillers for grounds maintenance, despite a landmark court case which linked the chemical to cancer.

Response from the IWC
OnTheWight has contacted the Isle of Wight council for a response to the appeal and asked a series of questions.

We’ll update once we hear back.

Shocking news ! Why cut verges and why use cancer causing weedkillers that kill our wall lizards. It must stop

A subject somebody should bring up at tomorrow’s council ‘biodiversity’ environmental forum; 5pm at County Hall.

Disgraceful. Have emailed all relevant people. Hope others do, too.

Vote Up440Vote Down
elemental
One of these operators was riding around on a quad bike recently, spraying weeds at the kerbsides in town, whilst riding on the pavement & around bus stops, all within a couple of feet of people. It was a windy day, contrary to advice to undertake treatments when the weather is still. IOW is becoming an increasingly sterile & ecologically useless area but then so is the… Read more »
Vote Up20-1Vote Down