This in from Steve at the Isle of Wight Steam Railway. In his own words. Ed 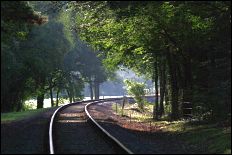 The Island’s very first railway line opened on 16th June 150 years ago. The Isle of Wight Steam Railway is marking the occasion with a morning of activities.

Accompanied by Ramblers
Accompanied by members of the Ramblers and headed by a knowledgeable guide from the Steam Railway, the walk will start from outside the Co-Operative Store in terminus Road in Cowes – the site of the former Cowes Station – and will leave at 8.15am which was the time the first train departed 150 years ago!

The distance to the Riverway Retail Park which stands on the site of Newport Station, is approximately five miles (one way) and the walk is expected to take around 2.5 hours. All members of the public are very welcome to join the walk and are asked to assemble outside the Co-op at 8am.

Blue plaque
At 12.00 noon, at the Co-op in Cowes, there will be a special unveiling of a blue plaque to commemorate the site of the former station. The unveiling will be performed by two great grand-daughters of the Hon Henry William Petre who was the first Chairman of the Cowes and Newport Railway in 1862!

There will also be other members of the family attending.

Cowes Library display
At 13.00 we will be opening a display in Cowes Library depicting the history of the Cowes to Newport Railway. Members of the Petre family will be present to talk about their family connection.

It is hoped that five members of the Petre family will be attending:

Ann Hales-Tooke is also writing a book on the Petres and is hoping to gather some more material – It seems that they were unaware of their Great Grandfathers’ connection with the railway!

The Petre family live at Ingatestone Hall where they have resided for some 500 years! There is now currently an 18th Lord Petre but the Hon. Henry William Petre – the first Chairman of the Cowes & Newport Railway in 1862 – was actually the second son of the 11th Lord Petre. He appears to have spent very little time on the Island and somehow managed to run the Company from Essex!

Filed under: Cowes, Island-wide, What's On