Cellos play in harmony: All welcome to charity concert

Wonderful cellists, James Halsey and Megan Rolf will be performing an entertaining mix of music at St. Boniface Church on Sunday 16th March at 3pm. 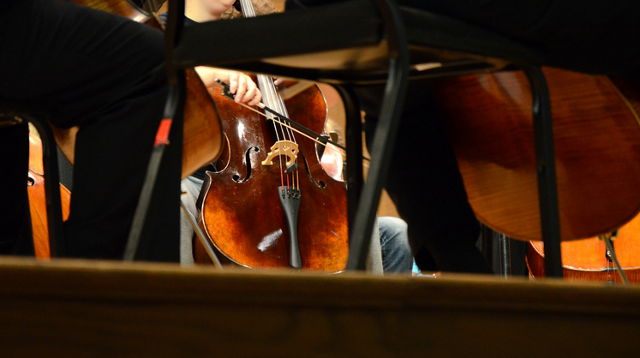 Thanks to Helen for sharing details of this upcoming event. Ed

The concert, which will be in aid of charities, will celebrate 17 year old Megan’s 18 months of intensive study with James in Bonchurch, which has seen the promising young cellist achieve many goals, including performing her first concerto with an orchestra in Aberdeen, taking part in the National Youth Orchestra of Great Britain, and gaining a place at the Royal Northern College of Music in Manchester to study with Philip Higham from September.

She is also currently preparing to perform the Elgar and Dvorak cello concerti with orchestras in May and June this year.

What to expect
The concert’s programme will include music written for two cellos including well known pieces by Barrière, Boccherini and Malcolm Arnold, and others successfully adapted, by composers such as Mozart and Gluck. One of the highlights promises to be the beautiful slow movement of Shostakovich’s First Cello Concerto arranged for two cellos.

James, who plays in the Bingham String Quartet, Tagore Duo and Beethoven Broadwood Trio all over the country and abroad, is also well respected as an inspiring chamber music coach and cello teacher. He brings these two passions together in his support of music for multi cellos which he actively promotes. He is the director and tutor (with international soloists, Alice Neary and Philip Higham as fellow tutors) of the Aboyne Cello Festival which he has developed into an amazing week of coaching, workshops and concerts, attracting cellists from all over the country, including the Isle of Wight.

All welcome
All are welcome to the concert which starts at 3pm. There is free entry and a retiring collection for the church, the Shoebox Appeal, and the Aboyne Cello Festival’s Young Artist Scheme.

Image: Ryan Victory under CC BY 2.0