Oh no, Brading Waxworks is closing its doors in the New Year, make sure you visit before it goes.

It was a great shame to hear at the end of last week that the Waxworks in Brading will be closing its doors come January. 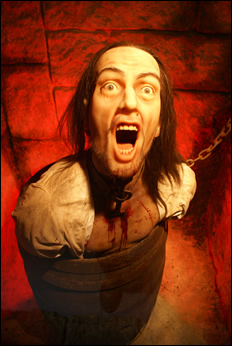 Our first visit to ‘Brading The Experience’ was an experience indeed. We were amazed by the fantastic collection of waxworks and historical paraphernalia.

The subtle touches of humour and in some cases downright weirdness secured it a venue we love taking friends to when they visit from the mainland.

Back in 2006, we were lucky enough to catch A Phoenix Too Frequent, the Ad Lib Theatre Co’s version of Terry Pratchett’s Night Watch which was performed in the courtyard of the attraction. It was a great use of the space, proving that tourist attractions can have multiple purposes.

Difficult to sustain
Unfortunately, falling visitor numbers have forced the closure with a reported reduction of half the number of people through their doors in the last seven or eight years.

Sadly, four part-time staff will be made redundant and the others offered positions at the nearby Bugle Inn.

We spoke with Janette Smith, General Manager at the tourist attraction who confirmed that that although use of the site and buildings is currently being reviewed, there is no news on what the plans for the site are yet.

The chamber’s response
Speaking on behalf of the Isle of Wight Chamber of Commerce, Dean Pascall, general manager said: “We know that Island tourism held up very well this year, so the closure of Brading the Experience is a particularly sad loss.

“Our enquiries show that, just as in any business sector, people are having mixed fortunes. Feedback suggests that many are feeling the pinch because of the credit crunch, and although we are encouraged by signs that the national economy is beginning to pick up again, news of the closure of the waxworks is a reminder that conditions are still very challenging, and that we need to work closely together.

“For our part, we will continue to work with tourism businesses and our partners as we seek to promote the Isle of Wight as the UK’s leading holiday destination, and create the conditions for success.”

Don’t miss your last chance
If it’s been a while since you visited the Waxworks, why not make another visit before it closes?

The attraction will be open as normal everyday until the end of October including a Halloween themed week for half term, but during November and December opening times are limited to weekends only.

They tell us that in the final days before closure (2nd-3rd January 2010) all money received will be donated to the IW Earl Mountbatten Hospice.

If you can’t make it along, here are a few reminders of the wonders it holds.

Click on the images below to see larger versions.

21 Comments on "Closure of Brading Waxworks A Sad Loss"

newest oldest most voted
Wendy V
It’s a quirky place alright. I took my son there earlier this year – amazingly it was my own first visit. You can really feel the building’s history and I loved a lot of the curiosities, but I was glad my son gave the chamber of misogynistic horrors a miss. When I mentioned it to my other half, he recognised the description from when HE last visited,… Read more »
Vote Up10Vote Down
anne pearce
i have visited the waxworks every year for the last26 years.i have had many experiances there,and llways shared these with the staff.myself and my daughters loved this amazing house,we visited this year on 10th july,and i was so upset to see it was closed,i could`nt believe it.my yearly trip to the island will never be the same. if i won the lottery i would buy it.i hope… Read more »
Vote Up10Vote Down
Nick Wallace

Please tell me that the stock (the wax models themselves, and their background sets) WILL be looked after, transfered to another attraction [and advertised as such], or sold to a collector!

This was a great place, and I think fans would like to know what happens next…..for our sanity!

Most of the exhibits (including the wax figures) were auctioned here; http://www.dukes-auctions.com/sale-highlights/13-04-2010.php
in April.

Nick, they were auctioned off earlier this year, as VB reported:
http://ventnorblog.com/2010/04/06/brading-waxwork-figures-go-to-auction/
It also attracted attention in the nationals, eg this from the Telegraph:
http://www.telegraph.co.uk/news/newstopics/howaboutthat/7578476/Stuffed-animals-to-be-sold-at-auction.html

Vote Up00Vote Down
stephen tibbetts
its sad to hear of the closure of the wax works i spent many a happy hour in there over the last 30 years god that sounds bad ive livde in new zealand for the last 5 i had my honeymoon on the isle of wight and took my children there we had candlrs made which we still have as a reminder of our time there my… Read more »
Vote Up10Vote Down
Graham
I have only just stumbled upon this and am deeply saddened that the wax museum is no longer there. I remember my parents taking me and my brother to IOW every summer for our holidays in the late seventies and I have many fond memories of my childhood there. I am no longer living the UK but I know my family still has photos of the wax… Read more »
Vote Up10Vote Down
watchdog
All this is no surprise at all. The demise of “The Brading Experience” was planned many years ago and has proceeded through a myriad of planning applications, most of them opposed by environmental groups and the parish council. The Auction House was fast-tracked by the planning department and went in without reference to parking or plans for the rest of the site, the children’s play area went,… Read more »
Vote Up10Vote Down
Adam

Hopefully, the publicity of the closure will prompt someone else to buy it and keep it open.

I’m very sad about this … our guests LOVE it!
Maybe the exhibits will find a new island home?
*gets purse out without telling husband*

Haven’t been for years – great photos – will try to drag the rest of the family down there before the end of the year. Thanks for letting us know.

Vote Up00Vote Down
joe
It’s a real shame that it has to close, and although it would be nice for someone to take it over it is very unlikely. I think the location is a big factor! Wouldn’t it be nice if somewhere a little busier with other attractions such as Blackgang Chine maybe take on some of the exhibits? Especially the horror ones, that would make a fantastic addition to… Read more »
Vote Up00Vote Down
Nick Scott-Denness
I saw this and just thought i should write this – my first time that i visited the waxworks i was but a little boy and i remember buying a rubber bat it was a trip i made with my dad and is one of my earliest memories as im sure that is the case for most people that were born and raised on the isle of… Read more »
Vote Up00Vote Down
Nick W
I loved this place as a kid in the late 70’s, and every time I visit the island, I always come here. It’s a great shame : Times move on, but the last time I visited, back in 2007, it still scared me!!! I really hope someone buys this entire collection, as it really IS worth keeping : The next generation will love it as much as… Read more »
Vote Up00Vote Down
Sharon Carr

My family and i are very shocked and saddened to hear that Brading the experience has closed down. We have been going since my eldest 26 year old daughter was just 7 years old. We have loved the atmosphere and the history for many years. Its a great shame, our visits to the island wont be the same.

Are you serious? No!

They were sold at an aution in Dorset last April

hello,me again.i visited the wonderful house,that was the waxworks only to find it run down and empty.does anyone know what is happening to this fantastic old house,it cant be left like this.i would love to go inside again

Soso sad, seems all my best childhood memories are dying one by one :(… Blackgang chine losing all it’s magic to the sea… Whitecliffbay holiday park wasting away…. Many fav shops gone… Everywhere u look places u once loved are boarded up … And now the wax works is no longer here …. R.I.P I.O.W

The first thing that always appeared in my head when thinking or hearing about the IOW was the Brading Waxworks.
Now it is gone! but the association will always remain.
Maybe soon I will discover that a rich multi
millionaire with happy childhood memories has come
along to re- invent and re- stock
AAHH What Dreams! …………

We took all our children to the waxworks many times we holiday their and visited the waxworks ,my children are all in their 40s now my daughter has so many memories and has this week-end took her daughter to the island but sadly she won’t be able to visit the waxworks.