Following VB’s publishing of the latest update this morning about the position of the Campaign for Sixth Form and Faith School Travel, Isle of Wight council leader, Cllr David Pugh, contacted us with the response he sent to Chris Whitehouse email. It’s published, in his words, in full below – Ed 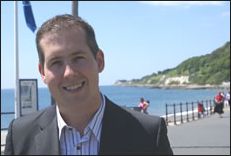 I believe that your latest statement is unfortunate, to say the least.

Anyone (not least yourself) who has anything to do with consultations knows that the process is not a referendum. Results are always more likely to be skewed to those who have responded due to being potentially affected by the proposed outcome. This is particularly the case when there is a concerted campaign encouraging people to respond – and in this case one which even suggested how they should respond.

“I must firmly dispute the claim”
Claiming that the outcome of this consultation indicates that the Island is massively opposed to this proposal would be like YouGov running a survey on foxhunting and with the majority of responses coming from members of the League Against Cruel Sports. YouGov wouldn’t claim that the result was indicative of public opinion and would weight results accordingly. Obviously we are not doing weighting, but I must firmly dispute the claim made in your headline.

I remain of the view that the vast majority of parents support these plans. That view comes from the informal feedback given to me from parents across the Island – not just those in faith schools. It is clear that the clear majority of parents believe in an equitable approach – indeed some have been puzzled as to why we provided such a genuine entitlement in the first place. These parents did not respond to the consultation because they had no direct interest in doing so. However it is their informally expressed view, and whilst an unscientific process, it still informs my view that the clear majority of parents support these overall changes.

Advantage
You claim that the proposals put onto Christian families a disproportionately large share of the cost savings the Council wishes to find. That may be the case in relation to this narrow proposal, but it could be reasonably argued that this is only the case due to these Christian families having an advantage for many years which was not afforded to others.

If we had taken a more equitable approach for several years and provided a similar concession to non-Christian families, they too would be facing an impact of such cost savings. Non-Christian families have been meeting the cost of alternative travel arrangements for years, and continue to do so.

I am disappointed by your false claim that it is unclear whether this is for pupils already at the College, or only for new students in the future. The proposed Home to Education Transport Policy is clear on this point in the secton entitled “Transitional Arrangements”:

9.2 If a pupil is attending a community, voluntary aided, trust or academy secondary school and
* entered that school prior to September 2012; and
* prior to September 2012 was in receipt of free home to education transport, then they shall be entitled to continue receiving this free transport until the end of Year 11 (aged 16), subject to their home address continuing to be more than three miles from the school. Any entitlements under section 6 will be unaffected by the phasing out of these particular arrangements. The exception to this is the provision of free transport for those attending Cowes Enterprise College who live within the three miles distance and previously received transport from the floating bridge to the school.

Instead of all this baloney and spin, why don’t Pugh just admit he has made another right mess with this decision.

He would probably gain a little more respect from island voters if he showed a bit of humility and honesty instead of blaming others for his own incompetance and poor judgement.

Obviously Pugh is unhappy about this issue because he was not expecting the result of the consultation to go against his wishes.

It’s about time the Boy Blunder grew up, take it on the chin and stop acting like a spoilt schoolboy who has just lost his best marble to another boy.

This is more proof these consultations are just a total farce.

Watch out N0.5! Pugh will be asking you to become his next deputy. It’s not the policy, but the pigs ear he has made out of it. In my opinion, the whole idea has been badly thought out without proper debate and discussions with those it affects.

Vote Up00Vote Down
Dinosaur Island
Silly blogger. The whole point is that the catchment area for Christ the King is, of course, the whole Island. Nobody is suggesting out of catchment travel ….. that would mean going to the mainland. That is one of the many points Pugh is misleading people about. By the way, there are rumours going around inside County Hall where my friend works that a Freedom of Information… Read more »
Vote Up00Vote Down
Sailor Sam
Why is the catchment area for CTK ‘the whole Island’? So if I get my sons to say a few prayers or join a Sunday School, I can send thenm to CTK from Ryde at the expence of all the Island council tax payers? Funny how the same argument isn’t being made by parents of our only private school on the Island (Ryde School) as well isn’t… Read more »
Vote Up00Vote Down
Dinosaur Island

Whoops, sorry Asite2C, I meant to post that to NO5! Sorry.

rumours are just that……………..CtK is not a special school it is just a school and the same rules should apply for each and every school on the Island.

If you choose to send you poor child half way across the Island to be indoctrinated then pay for it.

It’s CTK not C—, comments like that show your mentality!

Vote Up00Vote Down
confused.com
can someone explain to me about the cowes enterprise bit in pugh;s statement, why on earth are pupils getting a bus to take them from the floating bridge to the school, which i thought was opposite northwood house!!! Surely this is more of a waste of taxpayers money, which is unnecessary, I live pelham road and my child walks to school, yet children are getting of the… Read more »
Vote Up00Vote Down
ACW

I find Mr Pugh’s letter both patronising and irritating. Mind you, I find Mr Pugh both of those things, and I’ve never met him.

The fight goes on. Without assistance with travel, the numbers able to go to faith schools will dwindle, the poorest families will opt for the nearest cheapest option.

Yes Mike, “Without assistance with travel, the numbers able to go to faith schools will dwindle, the poorest families will opt for the nearest cheapest option”, just like the poorest non-faith school families have been doing for many years.

Faith schools ! What a load of rubbish.
Schools should be for education and not time wasting on hocus-pocus.

Let the children make up their minds about their beliefs when the are old enough to understand. Far too much brain washing has gone on for centuries.

All children should be helped to attend schools safely, and if it means more community tax so be it; money well spent.

It hurts, but Cllr Pugh is right on this. To favour a faith school would be in contravention of the Equality Act as it it would if any actions disadvataged one faith community against another. If faith transport was subsidised, an aetheist could claim similar for transporting their child to a school of their choice

It’s nothing to do with the rights and wrongs of the policy, but the blundering way it has been put together and introduced.

Pugh needs to learn how to discuss issues with those of opposing views and explore ideas both sides can agree to instead of “you’ll do as I say” type of decision making.

simple…ban all faith schools and treat all schools the same

Vote Up00Vote Down
retired hack
Pugh’s take on the importance, or lack of it, of the Council’s consultation exercise/s is revealing, and it’s also hypocritical. When the results of these consultations can be spun in a way which appears to back the Council’s policy, they are all too quick to do that spinning. Often this is achieved by not asking the correct question, for example recently when the topic was waste collection.… Read more »
Vote Up00Vote Down
L Pinkerton

Interesting. I wonder which lowly officer was charged with writing that for Mr Beynon to give to the leader to colour-in.

Vote Up00Vote Down
Julia Hill
Cllr Pugh, If you hold the consultation process in such low regard and fully intend to ignore the results of any such consultation anyway then save your money and ditch the public consultations on the Island altogether. Oh no, that’s right you can’t, you are legally obliged to conduct consultations on such matters aren’t you! And why is that? Because it’s a tried and tested democratic method.… Read more »
Vote Up00Vote Down
confused.com
can someone explain to me about the cowes enterprise bit in pugh;s statement, why on earth are pupils getting a bus to take them from the floating bridge to the school, which i thought was opposite northwood house!!! Surely this is more of a waste of taxpayers money, which is unnecessary, I live pelham road and my child walks to school, yet children are getting of the… Read more »
Vote Up00Vote Down
L Pinkerton

It is because the East Cowes kids used to be provided with a bus via Newport to Cowes High and presumably this doesn’t cost as much. If no transport were provided the Cowes Secondary would be half empty.

Oh ye of little faith – canst thou not walk on water? Save the cost of ferry travel…

Chris Whitehouse has four children attending a church school on The Isle of Wight.

He tells Premier Christian families have been let down.