Principal of Ryde Academy tells OnTheWight that inappropriate peer pressure was one of the things that sparked the crackdown on uniform. Find out more by listening to our podcast interview below. 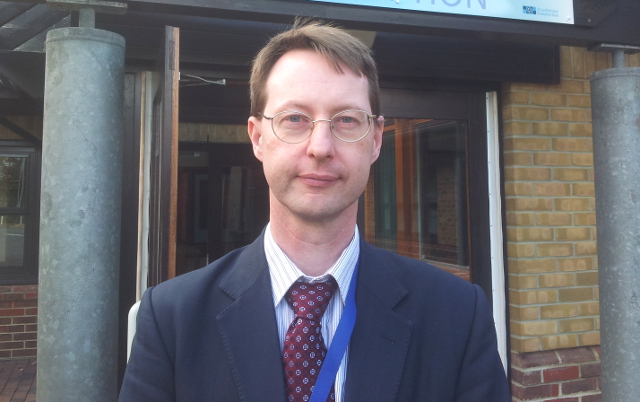 Last week, prior to taking a look at an art exhibition put together by Ryde Academy Sixth Form pupils, OnTheWight sat down with Principal of Ryde Academy, Dr Rory Fox.

Readers of local news, as well as national, will’ve seen details of the crackdown on school uniform led by Dr Fox at Ryde Academy on 17th June.

The views of parents and pupils have been widely covered in the press in the last two weeks, but OnTheWight hadn’t seen much from Dr Fox as to his thinking behind the crackdown. The main purpose of our discussion last week was to delve deeper into the background to ‘D-Day’ (dress day) at the school which has around 1,000 pupils.

Series of questions
During our 40 minute interview, we posed a number of questions to Dr Fox including:

Students under peer pressure
During our discussion Dr Fox explained that some of the girls said they felt under pressure to wear their skirts shorter than they wanted to.

He said that two pupils had initially expressed concerns and when the school started to ask questions, others said that they too, had come under pressure.

“When we became aware that some students were being essentially bullied over the length of their skirts we thought we have to act.”

Discrepancy in number of pupils affected by crackdown
In the last two weeks, some media reports stated that over 250 girls had been sent home. This didn’t tally with the figures we’re received from the school.

On the podcast below, you’ll also hear Dr Fox confirm that only 30 pupils were sent home on 17th June, with 100 pupils kept in the hall that day.

The Academy have since confirmed that 50 pupils were kept in the hall the second day and since then it’s been just a few individuals.

Listen to the interview
The interview is around 40 minutes, but should be of interest to parents and pupils of the school.

newest oldest most voted
The Sciolist
He got this spectacularly wrong – why else did it become national news – but will not admit it. If my child attended a school run by this man, I would probably withdraw her. The principal of uniform is arguably sensible, and it is his school rule. But to do this just a week or two before the end of term is plainly wrong and shows no… Read more »
Vote Up00Vote Down
ratbag

You think that’s wrong? How about sending children home and not bothering to tell their parents for several hours or informing the parent that child is in isolation when they are not even on school premises (due to having already been sent home or formally collected by a parent).

This is why Fox’ claims and the school’s ability to follow it’s own policies are not to be trusted.

Ha ha, good choice of photo! Send him home at once, (loose tie).

Vote Up00Vote Down
Dani northcott
When the head and school do not adhere to their own procedures no one seems to have the power to intervene, they just keep moving the goal post so it’s impossible for parents and students to kero up and even if they do they will find or mistakenly place a into isolation and no one can do a thing! The arrogance of this man that he feels… Read more »
Vote Up00Vote Down
The Sciolist
I am sure his management style will have been affected by his experience working in prisons. Unfortunately prisoners have few advocates and little choice. Pupils, or students as they like to call them do have both. This man has angered a lot of parents who are now looking at other aspects of his leadership and the structure of his school. I hear they have no parent governors?… Read more »
Vote Up00Vote Down
Anthony Wood

Sciolist – you heard wrong there then!

Note below they have one Parent Governor:

Vote Up00Vote Down
Caconym
A massive overreaction by Fox, then. A few girls complain about peer pressure and he instigates this huge clamp-down on uniforms at the most inappropriate time of the year. The wrong way of dealing with the problem at the wrong time and in a far too heavy handed manner. Note to Editor: Can we please have a transcript of this (and future) interviews. It is not always… Read more »
Vote Up00Vote Down
Sally Perry

We don’t have the resources to transcribe the interview, but if you’d like to (you have access to the audio file here) we’d be happy to share with other readers.

Mr Fox you are full of rubbish. You are also a bully, and you have sent kids home for a number of stupid reasons. That’s for being fair, do you even understand the word. I would like to see you gone and not working in another school or with any kids ever again.

According to Dr. Fox’s CV in Linkedin his last four jobs have lasted less than 12 months. ( Of course, they might be just short-term trouble-shooting assignments!.) http://uk.linkedin.com/in/roryfox

See I am that mad at your lies I have spelt my name wrong Vernon.

Vote Up00Vote Down
Smithy
I listened to the Headmaster arguments with great interest (unlike most of the other contributors) I can find only concern for the the children’s education in his comments and actions. It’s not so long ago that bullying was ignored by schools. Now poor parenting leads to collective bullying because they have no rules in the home therefore rules in school don’t matter either. Parents complaining about the… Read more »
Vote Up00Vote Down
Charlotte Urquhart

I want to put a down arrow to show how much I disagree with your comment. Go find out some facts and come back and comment in a less small minded manner. Here’s a link to get you started… http://www.motherfunk.co.uk/blog/ryde-academy-parents-seek-support-from-the-childrens-comissioner

Vote Up00Vote Down
truthbetold
I look forward to your interview with a member of the parents group to enable them to reply to Dr Fox’s claims. I am lead to believe that his interview misleads, misdirects, glosses over some matters, ignores others, contains untruths, and generally spins the issue. Also re the school hall being used for isolation as it was laid out for exams; An exam generally lasts around 2… Read more »
Vote Up00Vote Down
Sally Perry

We’d be happy to sit down with a member of the parents’ group to record an interview. Please ask them to get in touch with us.

I would like to sit in on this, and have a say please.

Vote Up00Vote Down
Denbo
Perhaps you would like to listen to my meetings with Fox. All audio recorded, and the final meeting transcribed by his own PA and my helper from the parent partnership. All make references to your paragraph ” I am lead to believe that his interview misleads, misdirects, glosses over some matters, ignores others, contains untruths, and generally spins the issue” What he did to my grandson was… Read more »
Vote Up00Vote Down
Bella
Only over 14s appear to have been sent home to change. My in-laws joined the army at that age! How do the parents know their ‘facts’ are more accurate than those of Dr Fox? I believe many other parents are now fed up with the ‘bully’ parents due to their behaviour. Let the poor man do his job which is a hard one and a pretty thankless… Read more »
Vote Up00Vote Down
truthbetold

My friend’s daughter is 12 and was sent home unaccompanied without notice to her mother. This is not speculation, it is a fact.

Does she not normally walk to school on her own then?

perhaps she does walk to school on her own. But if I’ve then gone to work how will she get into the house if there is nobody home?

It was to repudiate the statement “Only over 14s appear to have been sent home to change.”

Smithy, have you read the parents comments? It’s not about the rules, it’s about how he handled the situation. We totally support uniform Ikea but he kept children in the hall for 6 hours with an attended toilet break and 10 minutes lunch, sent kids home without parents knowledge (breaking safeguarding rules) and li ed children up in the courtyard for inspection in front of everyone.

Vote Up00Vote Down
smithy
Sorry but you comments are meant to fan the flames not come to any sort of compromise. Why are you not asking about the bullies. Who are they? How can the they be eliminated. Are they actually just in the school? You may in the end hound out any Teachers or Head your children dislikes but it’s their education that suffers. Ask yourself what was the heads… Read more »
Vote Up00Vote Down
truthbetold

Smithy, you’re understanding appears to be based only on the pod cast which is believed to contain mistruths and spin.
Therefore, it is essential that you seek out “The Parents” views.
Only then will you be able to make balanced, well judged comments on this subject.
You are likely to be surprised and concerned at what you read or hear.

Looking at Dr Fox’s CV on Linkedin (as supplied by cynic) http://uk.linkedin.com/in/roryfox
I’d query why this man was taken on in the first place. I think the people who appointed him have some serious questions to answer. Was Dr Fox the best applicant? If “yes” then God help us! No wonder the IoW is bottom of the education tables.

Vote Up00Vote Down
s t osmund
Parents are well aware of the relevant uniform policies of the schools to which they send their children. Many Island parents choose to which rules their children will adhere and support them when they are blatantly in error. The hard fact are that our dismal education system is the result of parents’ and teachers’ apathy. My daughter taught in some rough mainland schools and was able to… Read more »
Vote Up00Vote Down
truthbetold
Unfortunately, most people who are commenting on here believe the issue is purely about the uniform, which it is not. If you, or any other commentators, are on Facebook, please research in the Ryde Academy Parents – The Truth Campaign group. There are obviously some very emotive posts, but also a lot of very well written pieces that outline the parents major concerns. You will find that… Read more »
Vote Up00Vote Down
Cynic

Have you noticed that the demand for “educational trouble-shooters” has boomed on the Island since the introduction of the flawed Academy system?