Allan told OnTheWight that although the landslip didn’t look too serious from the photos, it was expected to be across the path of the road by the end of the night. 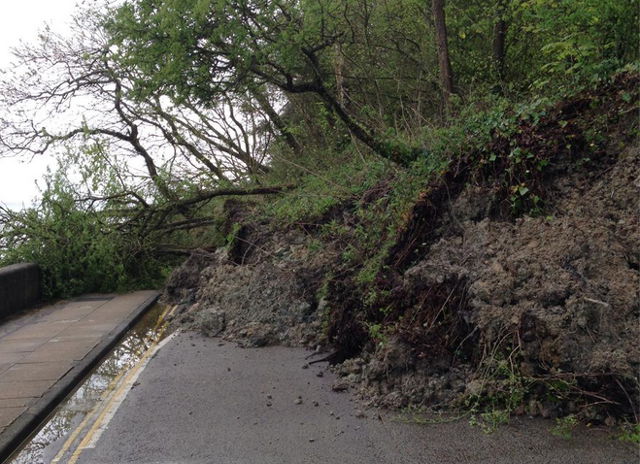 Our thanks to Allan Marsh for sharing these photos of the East Cowes landslip on the Esplanade that resulted in the road being closed on Friday afternoon.

East Cowes Esplanade has been closed for safety reasons due to a landslip. Access is restricted past the play area.

Allan was happy to pop down and take a look for OnTheWight. When he sent through the shots, our first thoughts were that it didn’t look too serious.

“Un-nerving noises from landslip”
However, as Allan explained, the landslip was still on the move,

“The noise was quite un-nerving, trees cracking and earth sliding.”

The Island Roads engineer told Allan he thought it was likely the land would be across the road by the end of the evening.

If you look closely at the photos, you’ll see there are trees rising up the bank, so if the prediction is correct, those may now be blocking the road.

How is it today?
Thanks to Martin Bower for sending through the image above and one below of the landslip today (Saturday). He told OnTheWight that “it still sounds like it’s moving”.

If readers from East Cowes would like to send in photos, we’d be happy to share with readers. It goes without saying that you shouldn’t put yourself in any danger in order to take the photos.