A six page response over the proposed asphalt plant from the head of Eurovia to the Island’s MP has been shared with OnTheWight. 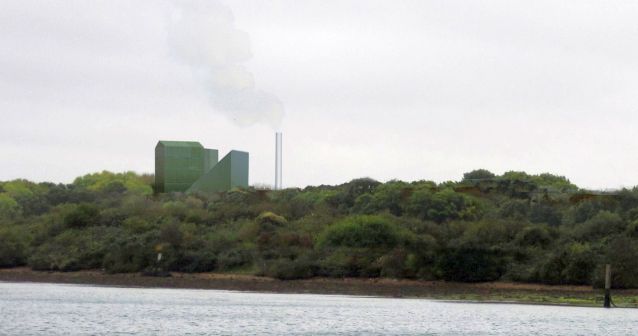 Readers may remember back in March, Isle of Wight MP Andrew Turner wrote to Scott Wardrop, Managing Director of the Eurovia Group insisting that he must answer questions in public about the asphalt plant his company hope to build on the River Medina in Cowes.

Over two months later, Mr Wardrop has responded to the Island’s MP (see letter embedded below), blaming the delay of his response on the ‘purdah period’ (what’s purdah?) for the recent local elections (held on 2 May).

“We are confident that the site we have selected is entirely suitable and most appropriate for this asphalt plant, as it is a brownfield site prescribed by Isle of Wight Council for future industrial use.

Own plant preferred
Many residents have argued that Eurovia should scrap their plans to build an asphalt plant on the Island and instead purchase asphalt from Bardon Vectis, who have a plant based at Blackwater.

At the moment, the company are having to ship in asphalt from the mainland, something they admit resulted in poor standard of road repair for their first major Island project.

However, in his letter to the MP, Mr Wardop said,

“We have reached the view, as we did throughout the bidding stage, that it is our preferred solution to build an Island-based asphalt plant under our direct operational control.

“We can confirm that the cost implications in relation to the temporary asphalt supply are being met by our Group, and not by taxpayers.

Advisory Group
In his letter detailed response, Mr Wardop added that Eurovia were keen to involve residents and businesses,

“As we have previously indicated, it is our intention to establish an Advisory Group, made up of residents and businesses, to ensure that issues of emissions, noise, dust and transport are carefully monitored. We are more than prepared to be held accountable for our commitments in this respect.

We also hope that our plant will contribute to the long-term regeneration of the Medina Valley, and Medina Wharf in particular, in line with the vision set out in the Island Plan Core Strategy. We recognise that our proposed use of Medina Wharf will help secure its future viability, which undoubtedly is to be welcomed.”

Plant not explicit in PFI contract
On the issue of whether the PFI contract is dependent on planning permission for Eurovia’s asphalt plant, Mr Wardop says,

“However we have reached the view, as we did throughout the bidding stage, that it is our preferred solution to build an Island-based asphalt plant under our direct operational control.

“Therefore I do not agree with your assertion that the positions articulated by Eurovia and the Isle of Wight Council are contradictory. Quite the contrary, our positions complement each other by setting out the respective positions of both parties and the appropriate separation of responsibilities, particularly given our interface with the Isle of Wight Council as a Planning Authority.”

“The discovery of asbestos is helpful”
Mr Wardrop has also addressed concerns over asbestos, by highlighting

“Many former such brownfield sites which are found on examination to contain asbestos have subsequently been managed effectively and gone on to be perfectly safe for future industrial or residential use. In many respects the discovery of asbestos is helpful as it means that we can now address this concern fully, and reassure all concerned.”

“contribute to the long-term regeneration of the Medina Valley, and Medina Wharf in particular, in line with the vision set out in the Island Plan Core Strategy. We recognise that our proposed use of Medina Wharf will help secure its future viability, which undoubtedly is to be welcomed. Furthermore, our proposed use of this brownfield site, which is in an employment regeneration area zoned for industrial use, gives this former landfill location a worthwhile future. Given your own past comments urging the use of brownfield sites, I hope you will recognise that our ambitions in this respect closely accord with your view.”

To see larger versions of the letters below, click on the full screen icon to open in a new window.

newest oldest most voted
woodworker
a complete load of doublespeak. Reduce it down to the basic points: -Yes, Eurovia need an asphalt plant on the island to meet their contractual obligations because they dont want to buy locally and share profits. The IOW Council didnt lie about that, but were not entirely truthful either. (the previous administration). -Eurovia want this plant come hell or high water, and will probably get it. If… Read more »
Vote Up00Vote Down
Richardsmith01

Folks, we need roads that are above the standard one will discover in India. Our road surfaces are rubbish, let’s get with it and organise some fixation. It rather looks like endless fuss and prevarication, there’s a surprise. Just fix the roads, please, this is beyond satire…

We all want decent roads Richard, but the roads can be fixed adequately with asphalt from a plant that already exists on the Island. A new plant in an inappropriate location is not the answer. The many health risks have already been highlighted here before.

Btw, do you happen to live downwind of the proposed asphalt plant?

Vote Up00Vote Down
James Luke
Richard – if you read Eurovia’s letter you will see that they are contractually required to deliver the road improvements even if planning permission is refused. They also confirmed that they must carry the additional cost and cannot pass onto Islanders. Therefore, we can have the much needed improved roads without this plant. Personally, I don’t believe that we should be compromising the health and quality of… Read more »
Vote Up00Vote Down
ThomasC
One can’t help feel a number of things from the letter: 1. they want to involve Island people very selectively – they very much don’t want to involve those mean and nasty people who don’t want them to have their plant at Medina Wharf. 2. A 3000 word response suggests the lady doth protest WAY too much! 3. They sound a lot like they’re talking to the… Read more »
Vote Up00Vote Down
steephilljack

“What’s purdah?” Purdah means waiting to see what the outcome of the election is and whether previous relationships with IoW Council are still operative.

The Purdah period ran from 27th March to 2nd May and applied to Government bodies only – a commercial company is not covered. Even if Eurovia felt morally that they should respect the election period, why did they not respond prior to the 27th (Mr Turner’s letter was sent on the 7th March) or in the 5 weeks since the election on the 2nd May?

Simples! Because they wanted a Conservative dominated IWC again- so they could get their “Medina Carbuncle” approved- and thus were not willing to take he risk of sticking their heads above the parapet again.

To adapt a phrase “It was NOT a good time to publish bad news!.” That’s why they employ Publicity Consultants!

‘Regeneration’…. Do you want the Medina Valley regenerated by a noisy, potentially dangerous, pollution causing plant? Unbelievable….It’s time that the new Council sort this out because once it’s there its too late.

Vote Up00Vote Down
James Luke
I can’t understand how a commercial company can be covered by any form of election blackout in responding to a list of questions from an MP. The fact that they use this “purdah” to justify their delay in response casts a shadow over the whole letter. Once again Eurovia have dismissed concerns by claiming that the objectors are more vocal than the supporters. In the last 12… Read more »
Vote Up00Vote Down
ALLAN

Vote Up00Vote Down
playingthenumbers
Moving on from the election shenanigans, what’s not addressed is the deleterious impact the asphalt plant would have on the economy, both in terms of of existing concerns; tourism, & the like, expansion of proven business concerns, giving Cowes what it needs to retain its claim as as a sailing Mecca, (shoreside facilities) as well as (heaven forbid) local house prices – still plenty of grounds for… Read more »
Vote Up00Vote Down
adrian nicholas
A ‘purdah’ period – how self-interestedly convenient for Eurovia! This is about a large non-dom corporate’s profit – that is why they are in business – nothing else – cartainly not the benefit of the IOW. Highways PFI was always going to be a disaster for the IOW and has the future potential to make ‘wightlink’ seem like ‘white knights’ by cost burden to Island budgets and… Read more »
Vote Up00Vote Down
James Luke

Localism should be given much more consideration in controversial planning decisions.

It seems the failure to adopt localism is a national problem and an e-petition is now underway urging the Government to look at this => http://epetitions.direct.gov.uk/petitions/38742