The iconic Art Deco building is opening its doors on the afternoons of Saturday and Sunday 21st and 22nd September with guided tours rounds the bits you don’t normally see. 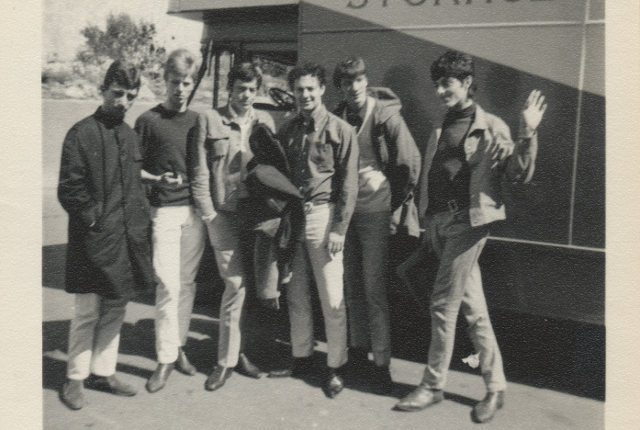 John shares details of this upcoming event. See bottom of article for detail about the rarely seen image of David Bowie. Ed

On the second weekend of English Heritage’s Open Heritage Festival there’s an opportunity to look behind the scenes at Ventnor’s Winter Gardens.

The iconic Art Deco building is opening its doors on the afternoons of Saturday and Sunday 21st and 22nd September with guided tours rounds the bits you don’t normally see.

History of the building
The building opened as the Winter Gardens Pavilion in August 1936, arguably too quickly as the paint had not dried in the concert hall, resulting in members of the audience being “daubed in paint”.

Since then it has been at the heart of the Ventnor community.

On the tour you will be able to stand on the stage where many great names have performed and hear how Davy Jones honed his act as resident band across the summer of 1965 to emerge as David Bowie less than a month later.

The band came over every Saturday in the back of a furniture van and, as hotel spaces were fully booked often ended up sleeping on the floor of Medina House Hotel in Alma Road, just off Ventnor seafront.

See inside the dressing rooms
You’ll see the dressing rooms which could tell tales of interesting happenings over the years, maybe how Dick Emery cemented his relationship with his second wife who he met on the Winter Gardens stage in 1950.

His residency could be the origin of his catchphrase “Ooh, you are awful, but I like you”.

The Winter Gardens used to be in public ownership but went into decline and was finally closed by Isle of Wight Council in 2011.  It is now in private hands regaining its position at the heart of the community.

Just turn up
Tours are free, you don’t need a ticket, just turn up at the Winter Gardens in Pier Street between 1pm and 5pm on the Saturday or Sunday afternoon.

David Bowie and Patrick Kerr
The rarely (if ever) seen photograph shows Bowie, second from left with the band outside the Winter Gardens in front of the removal van that was their transport from Bournemouth.

As well as Bowie (then Davy Jones) and the band, also in the picture to the right of Bowie is Patrick Kerr, presenter of TV’s Ready Steady Go, who was Saturday night compere at the Winter Gardens in the summer of 1965, and to the right of him Johnny Kidd (of Johnny Kidd and the Pirates).  The photo would have been taken on Saturday 31st July 1965.