Fifth J16 title of the season for Ryde Rowing Club

The blustery conditions had little impact on Ryde Rowing Club’s J16 coxed four who comfortably won their event at the weekend – the Club’s fifth J16 title of the season. 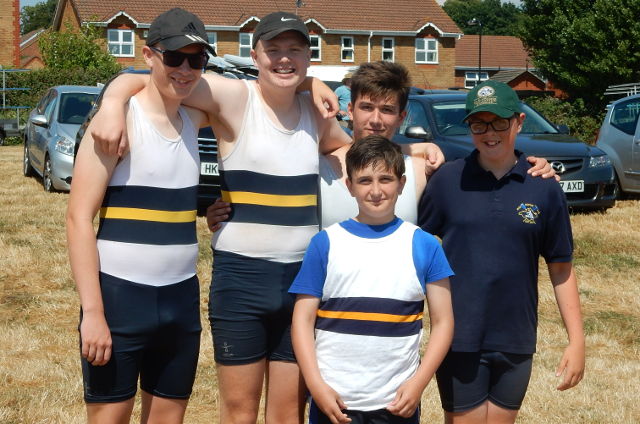 Ryde Rowing Club young squad competed at the BTC Rowing Club Regatta on Saturday (14th July) which was held at Western Shore, Southampton, in very warm, but quite blustery conditions which made it quite difficult to race in.

However the conditions appeared to have little impact on the Wightlink sponsored Club’s J16 coxed four of Paddy Kearney, Tom Starkey, Ben Sanderson, Austin Smith and cox Dan Sanderson (pictured above) who comfortably won their event – the Club’s fifth J16 title of the season.

There was also a fine performance from the Club’s Senior Sculler, racing for only third time this season and at this level who finished third in a race won by Olympic Bronze Medallist, James Foad of Itchen Rowing Club.

There was an equally good performance in the Men’s Coastal Single sculls where Joel Smith also finished third – his best result at this level since his promotion from Novice status earlier in the season.

There was also a strong performance from the Clubs Men’s Novice Scullers, competing against older opposition, where Austin Smith finished second in his heat to gain a place in the final – where he finished in a creditable fifth place and Ben Sanderson who finished fourth in the same heat – just missing out on a place in the final.

The Men’s Coastal Junior Four of Tom Starkey, Joel Smith, Ben Sanderson and Austin Smith with Dan Sanderson in the coxswains seat once again produced there best result at this level to date comfortably winning their heat to claim a place in their first final since promotion to this status – where the finished in fifth place.