Firefighters give their frank responses to the Cabinet vote (updated)

OnTheWight caught up with the firefighters who were at last night’s Cabinet meeting, following the vote to make changes to Isle of Wight fire service. Some of them were quite … direct. 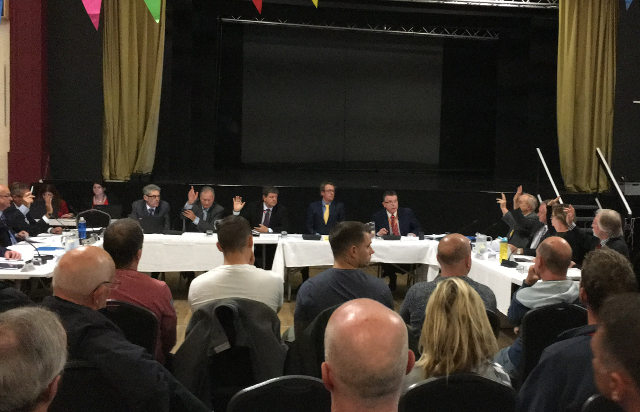 If you followed OnTheWight’s live coverage of the Cabinet meeting last night you will have seen that members voted unanimously in favour of the plans of the ‘shift realignment’ for the Isle of Wight Fire & Rescue Service.

Once the unanimous vote had been taken, the 30+ firefighters that watched the meeting got up and left.

“A done deal” and “A stitch-up”
OnTheWight spoke with several firefighters after the meeting and comments in response to the decision included,

“Angry that this has gone through.”

“A done deal before the meeting.”

The Cabinet member has consistently stated that the changes are not driven by cost-cutting.

Inspector’s report
During the meeting the Leader of the Isle of Wight council, Dave Stewart, read out the recommendation of the Scrutiny Committee, which was to not make a decision until the report from Her Majesty’s Inspector had been received (apparently due in a matter of weeks).

When OnTheWight asked firefighters why did they thought the Cabinet weren’t prepared to wait for the HMICFRS report before making a decision, one firefighter told us,

“Tig knows what is in the report. He told us.“

They also claimed that the as yet unpublished report says that Fire Service coverage on the Island “is adequate”. OnTheWight asked Cllr Outlaw whether he has already seen the report.

“With regards to the HMI Report it is imminent but I have not seen sight of it yet. I did however have a 30 minute briefing from the inspectors before they left to give me their feedback.”

No change before report received: “Absolute bullsh*t”
During the meeting, Cllr Outlaw explained that no changes to systems will be made prior to the HMICFRS report being received and findings would be integrated into the process.

OnTheWight asked firefighters their reaction to that comment, one responded that it was, “absolute bullsh*t”.

Ideas rejected
Firefighters also said they presented the Cabinet member with at least two or three different ideas for shift patterns, but they were rejected.

“With regards to the Cabinet meeting, I am pleased the Cabinet endorsed the proposal to allow the Chief Fire Officer to realign service to give the Island community greater maximum cover for its whole time firefighter resource.

“I know the Fire Brigades Union have been critical of the plans, so I was surprised that they were not challenged publicly by them during the 15 minutes public questions and have instead used social media to criticise them.

“However I believe is important now that the service will be able to move on make the changes and show how professional and effective the service can be.”

The vote
The motion was presented by Cllr Tig Outlaw and seconded by Cllr Clare Mosdell.

All members of the Cabinet voted in favour of the motion:

Remember those Cabinet names, plus Michael Murwill who was absent. Hold them to account.

Vote Up38-3Vote Down
YJC
I just cannot believe that “we” (IW Council we vote them in) would treat our firefighters in this way. Very short sighted. As far as I’m concerned firefighters are at the top of the tree and have my total respect and admiration for the job that they do. It is not a job that anyone can do. You never know what to explain when you go out… Read more »
Vote Up37-5Vote Down
Colin

Anyone with 20 minutes to spare should have a listen to Paul Topping on IW radio having a “chat” with the council leader. Illuminating.

Vote Up28-1Vote Down
Colin
In the Paul Topping discussion, our glorious leader was specifically asked about the 4 man deployment; the issue on which all the debate has been about. And he declined to answer saying that he hadn’t the document in front of him. Myself, having voted in favour in one of the most contentious decisions this week, I would know off by heart the answer. So, was he deliberately… Read more »
Vote Up28-4Vote Down
holdmyheadinmyhands

They don’t get told the outcome of the report till 2 days before it’s released this is a fact …… also one of their own councillors said it was a red herring anyway.

Is there no ends to their spinning of information

If, as Cllr Outlaw thinks, fire cover is adequate why,during the recent Sandown Hotel fire when Incident Commander “made pumps 6 aerials 2” only 1 aerial could respond as the 2nd had no driver available to operate. Thats before any cutbacks. Worried? You bet.