Hospice Chairman George Hibberd walks over hot coals for charity at the launch of the Isle of Wight Walking Festival.

Many people will know that George Hibberd, chairman of the Earl Mountbatten Hospice, is due to retire later in the year. 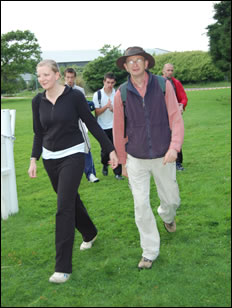 But did you know that he has taken part and completed in every Walk the Wight since 1993?

This year, at the beginning of the Isle of Wight Walking Festival, George is preparing himself for his 17th Walk the Wight by taking part in the Firewalk event.

This brave feat will be carried out at Newport Quay on 9th May at the launch of the 2009 Isle of Wight Walking Festival (which also happens on George’s 62nd birthday).

He tells us “I noticed that the Firewalk is scheduled for 9th May, which happens to be my 62nd birthday, and it struck me as the ideal way to celebrate. Besides which, after having my feet cauterised, I shan’t need to worry about blisters when I tackle Walk the Wight the following weekend!”

It’s Obviously George is hoping to collect as much sponsorship as he can for the Firewalk and will be splitting the money raised between the the Hospice and the Barely Born Appeal: “There is a pleasing symmetry about supporting care at both ends of life, because they are the times when we are least able to help ourselves.”

If you would like to sponsor George for either or both events, you can do so online at his JustGiving page

Alternatively he has sponsorship forms available at the Hospice reception, Hospice Shops, or you can contact him direct at 14 Avondale Road, Newport. Tel 522179.