Jill Wareham looks forward to hearing of the MP and IWC stepping in to help save the 500 jobs at Vestas. 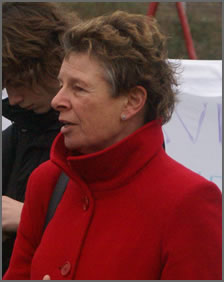 Following the news yesterday that wind turbine blade manufacturers, Vestas, plan to close their manufacturing plant in Newport, the Island Liberal Democrats tell us that they’re shocked to learn of the possible loss of 500 jobs at Vestas.

“This is devastating news for those people and their families who are losing their jobs. The knock on effect of the closure of the factory will also have a massive impact to the whole economy on the Island.

“We, as Liberal Democrats, are particularly saddened because we fought to bring Vestas to the Island over ten years ago. We expect that both the MP and the Council will be moving quickly to contact the Government Ministers and SEEDA to attract more financial support so Vestas can stay on the Island.”

newest oldest most voted
Trampolineman
They dont need more government cash, they need a sense of corporate responsibility. Profits up 70%, sales up 20%, but they want to shut becasue the Chinese and US are funding new plants there. The UK workforce has done nothing wrong, they have created a very successful company, and Vestas owe it to them to support them, not to chase around the world after government cash. If… Read more »
Vote Up00Vote Down
david h
Quite right – this company has milked the British taxpayer of millions, now it wants to go and find more cash elsewhere. It’s a disgrace. The Liberals and the Labour party fell over themselves to hand out our cash, they behaved like fools. They even got the EU to cough up the cash for their transport barges and infrastructure. All wasted money. I remember how they all… Read more »
Vote Up00Vote Down
wighteye

If you google Vestas closure, you find a trail of havoc in Campbeltown, Scotland and in Australia, where Vestas have closed plants. Certainly with the closure of the Scottish plant, there seems to have been arguments about the company receiving grants/funding to encourage them there in the first place – ironically they lost the work to the plant here on the Island – history repeating itself?

Worth a look: Check out Greenpeace

Vestas are global industrialists. It’s not a surprise that they act only in their own interest with little sense of responsibility to anyone else (or even to the environment).

Vote Up00Vote Down
Graham Petersen
The campaign to save Vestas is going to need more than a petition.The workforce need to look at the example of Visteon in Enfield and Belfast, who have just achieved a result in their campaign to force the company to offer a better deal. The main difference is that they were in a union. Unfortunately there is no union recognition at Vestas. Not too late to try… Read more »
Vote Up00Vote Down
R Shelton