Last weekend at the uber-friendly and laid back Hawkfest, we were lucky enough to meet some of the band members. 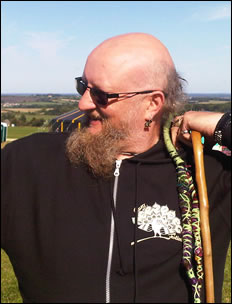 Whilst they were wandering through the camp-site, chatting to the fans, we managed to grab a few minutes with Hawkwind bass player, Mr Dibbs.

Mr Dibbs is a long time fan of Hawkwind, having been into them since the age of 19. He never imagined ‘living the dream’ of being in the band, even when he was their roadie for ten years, but the dream became reality four years ago when he was invited to join the band as bass player.

Hawkfest: Keeping the free festival spirit alive
We were really impressed with not only the show the band had performed the previous night, but also the festival itself.

Mr Dibbs explained that Hawkfest was all about keeping the spirit of free festivals going, they are always a place where everyone keeps an eye out for each other, as well as the kids.

“If you make rules, people break them”, he said, explaining that Hawkfest goers “get it” – they understand what’s it all about – hence the friendly atmosphere, clean site and lack of any trouble.

Performing bands all hand-picked
Forty bands played over the course of the weekend and all were hand-picked by members of Hawkwind.

Mr Dibbs told us a whopping 400 bands had applied to play at the festival. Hawkwind band members went through the process of listening to the first three songs on each and every CD sent in, before selecting the forty who would play at the 40th anniversary festival.

Mr Dibbs has much more to say, so why not have a listen by by clicking on the play button below.

newest oldest most voted
Jackie
Best festie I’ve been to in years. Everyone was happy, friendly, considerate and helpful. He’s right about the litter, I stayed behind to help with clearing up and there was very little in the way of litter, mostly little things like fag butts and tent pegs. All the inspections throughout the week passed with flying colours. In fact all of the various inspectors (council, fire etc) were… Read more »
Vote Up00Vote Down