Who owns the ferry companies is of great interest to all on the Island. Here’s what we’ve been able to find out about Balfour Beatty Infrastructure Partners LLP so far. 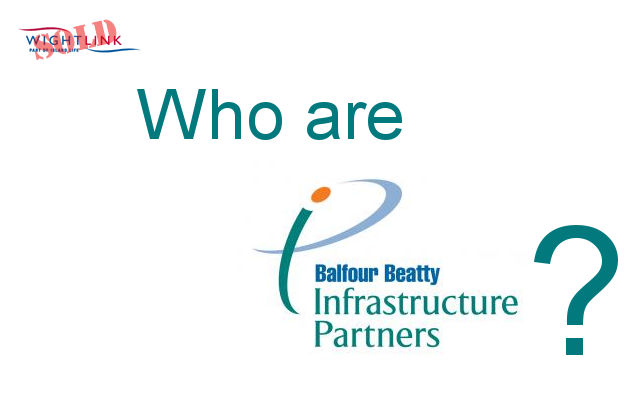 After the surprise announcement this morning of the sale of Wightlink ferries from Macquarie, the Isle of Wight has been introduced to a new organisation – Balfour Beatty Infrastructure Partners LLP.

In summary, they’re an organisation that focuses on investing in “transport, energy and utilities across the UK, Europe and North America”.

Here’s some background
Below is the detail of what we’ve been able to gather about Balfour Beatty Infrastructure Partners LLP, or BBIP.

Balfour Beatty (details on the plc below) announced in November 2010 it was setting up a ‘funds management business’, the BBIP Website says they did for the following reasons:

Our objective was to utilise a combination of infrastructure asset knowledge, skills and experience that has accumulated within the Group, particularly in the Infrastructure Investments division and Parsons Brinckerhoff, to earn a superior return on capital as well as advisory fees.

BBIP set up in 2011
BBIP itself was set up in 2011. They now have offices in London, New York and Munich and have been seeking investments from other financial institutions.

In January 2013, they announced the closure of the first round of funds, of £200m. Balfour Beatty committed £70m to it, saying “ultimately reducing Balfour Beatty plc’s share in the fund to c.10%.”

They also said “key target sectors of transport, energy and utilities across the UK, Europe and North America.”

Balfour Beatty was formed in 1909, Wikipedia tells us, initially the Company concentrated on tramways. Well known for construction, they’ve grown into a formidable company. They now define themselves as “a leading international infrastructure group”.

They’re listed on the London Stock Exchange and currently (at time of publishing) have a Market Cap of £1.6 billion pounds.

What’s an LLP?
Balfour Beatty Infrastructure Partners is an LLP. Perhaps not familiar, an LLP is a Limited Liability Partnership.

Wikipedia has a whole page about LLPs in the UK, including this brief section below

In relation to tax, however, a UK LLP is similar to a partnership, namely, it is tax-transparent, that is to say it pays no UK corporation tax or capital gains tax. Instead, LLP income and/or gains are distributed gross to partners as self-employed persons, rather than as PAYE employees. Partners receiving income and/or gains from an LLP are liable for their own taxation.

* BALFOUR BEATTY – Troubled British infrastructure group Balfour Beatty has sold 80 percent of its interest in its offshore transmission project for 40 million pounds ($62 million) as part of plans to overhaul its business.

More comprehensive details of the announcement are also available.

This is just what we’ve found so far, as ever, the more we find, we’ll add here.

First you buy the company THEN you build the fixed link tunnel.
Then every body’s happy :-)

and then you build bigger roads and motorways on the Isle of Wight and happiness becomes nirvana for some in tax heaven and horror for the inhabitants of the Island….

Vote Up00Vote Down
ThomasC
Stuff and nonsense – a fixed link is not the development plan to pave the whole IW – it is just a road on to the IW. We need a better link on and off the Island for many positive reasons, including better access to healthcare, ability to attract higher quality health and teaching staff, to improve social mobility and help Island-based businesses compete effectively. We will… Read more »
Vote Up00Vote Down
carl parmer
I agree. This whole idea that 10000’s more people will storm the island is crazy, as stated people will only come here if they want to. I’ve heard comments like “all it will bring is day trippers” well that maybe so but ask Brighton how it g? ets on with day trippers ant the £millions they spend. And “ we would get even bigger lorries!” how? Have… Read more »
Vote Up00Vote Down
Cynic

The money BBIP paid out for WL would be peanuts compared to that needed for a fixed link.

True, but a fixed link would be the (Stalinst-idealess ) way to tap the 300 billion the EU wants to spend to revive the EU economy!

And within the current system, that’s…not going to happen.

pending on the general elections…
personally I hope money from Brussels goes into alternative tourism renewable energy and sustainable job creation our Isle of Wight Schools and Colleges are providing by teaching this skills!

Why would the EU fund billions of euros for a fixed link to a rural outpost?

@cicero
Juncker revives the EU economy with 300 billion and I think 9 billion go to the UK….

Yes ewald- now answer the question” Why would the EU fund billions of euros for a fixed link to a rural outpost like the Island?”

….. especially when a fixed link to the Island is not part of any one of the Ten-T “corridors’ in the EU Trans-European Transport Network uintil 2030.

@cicero
aske the Labour candidate, he is promising this link ” out of 9 billion his government would spend” that’s my only indication so far of how much the EU out of this 300 billion wants to allocate to the UK.
My own enquiry in Brussels/London is unanswered so far

Is that the same £9 billion Labour claims the UK will avoid sending on social benefits if it was elected rather than the Tories? How many times

( BTW taking the Oresund Bridge as an example (roughly the same length as needed for a Solent bridge) it would cost about £6 billion in today’s money.)

Is that the same £9 billion Labour claims the UK will avoid sending on social benefits if it was elected rather than the Tories?

How many times are they promising to spend it?

( BTW taking the Oresund Bridge as an example (roughly the same length as needed for a Solent bridge) it would cost about £6 billion in today’s money.)

Fixed link…… No thanks!
Does anyone think that a referendum would really produce a yes? Apart from the foaming at the mouth support on “social media yah” I’ve yet to find a fellow Islander who would support it and no, I am not a pensioner and yes I do travel (for 25 years) to a job on the mainland

Vote Up00Vote Down
ThomasC
Fixed link….. yes please for the good of the overall IW community. I can find a lot of people who want a fixed link, many of them who are pensioners, many who are unemployed, many of them who have to deal with incomes that are, on average 28% less than those in Hampshire. The epetitions are not ‘social media yah’ (which you’re contributing to when you post… Read more »
Vote Up00Vote Down
Confused.com

All this talk about a fixed link is baffling.

Why would a company spend multi-mega-millions buying a ferry company to then spend multi-billions building a fixed link?

Surly everyone gets that? Oh and wipe out some of the heaviest opposition into the bargain

So you keep saying ewald but not being specific from which EU programme only generalstudd about junckers 300 billion euros.

Vote Up00Vote Down
ewald
you can google or read my link or ask the Labour candidate from his pledge I got the £ 9 billion for the UK as I think with 27 members this is what the UK would get out of Euro 300billion… Its all if you know where to apply how many jobs a company would create and of course which party the company supports and who wins… Read more »
Vote Up00Vote Down
attrillislander
Why is everyone bleating on about a fixed link? It isn’t going to happen. Let’s deal with the reality. Balfour Beatty IP have bought Wightlink. Whatever you think of that they clearly intend to be it in for a while. It is now incumbent upon our political leaders to work with them for the good of the Island. If these fellas want to build their reputation as… Read more »
Vote Up00Vote Down
carl palmer
I agree in part with you. Red funnel have made real effort to push ahead, the staff act as though they have been sent to charm school and the mail out to everyone with the special offers is a real bonus. The new ship is a pleasure to sail on and how often is it late? Virtually never as opposed to wight link who cancel sailings at… Read more »
Vote Up00Vote Down
carl palmer

It all depends on what BBIP paid for it. If it was a high price they will want to cover their layout by hiking the fares.
however that assumes they come to an “understanding” with red Funnel as I for one will always go with the cheapest.

Vote Up00Vote Down
Rhos yr Alarch
I find this news extremely ominous and possibly the beginning of the end for the IW. Anyone who thinks a bridge will just bring benefits and no negative change is sadly deluded. No major company would be interested unless huge further development opportunities were to follow for it. The IW would become an extention of the mainland, and its strategic position would mean that it would be… Read more »
Vote Up00Vote Down
Sam
A fixed link would not be free, it would probably have a high charge comparable with the ferry, so ‘day trippers’ would have the same hurdle, it would have controls and cctv so ‘criminals’ would have the same risks as using the ferry. What we would lose is waiting in the car with four tired children because we missed the ferry by two minutes due to traffic… Read more »
Vote Up00Vote Down
Cynic
Sam- you would also need to arrange for the “bridge” to avoid being closed by fog, accidents or because the central span has to be lifted for maintenance and/or to allow shipping to enter/exit the Solent. (We lived on another Island for six year with the only exit to the mainland being a lift-bridge that was often out of action for various reasons.. We were on tenterhooks… Read more »
Vote Up00Vote Down
Andrew
Cicero- The term used was fixed link not bridge. Currently the plan that had been but forward most seriously was for a tunnel with two lanes for road traffic in each direction and tracks did full sized trains. Of course the trains will be about as reliable as the ferries or a lifting bridge but most of the time you would still be able to drive down… Read more »
Vote Up00Vote Down
Cynic

Andrew- I understand the tunnel argument.. Where would entry/exit points be located? ( I can’t seem to find websites showing the tunnel plans with route, Solent geology and feasibility and cost.)