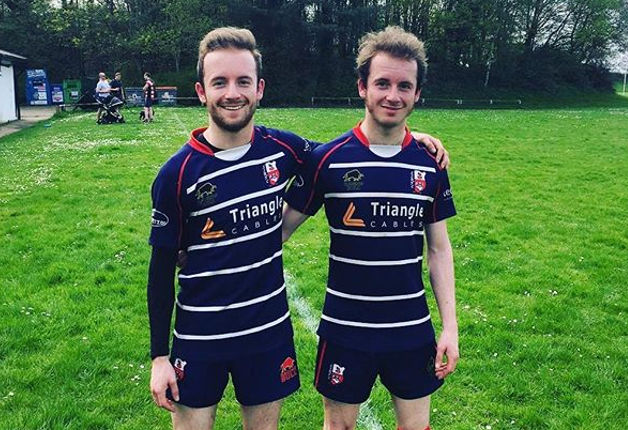 The visitors looking to maintain their 100% start to the season, meanwhile the hosts searching for their first victory of the league season.

In damp and tricky conditions, the Hurricanes kicked off and instantly started putting the pressure on the Farnborough attack, and managed to steal a turnover in the first few minutes. With the conditions playing their part and preventing either side from really spreading the ball wide quickly, a succession of handling errors and scrums occurred, as both teams adjusted to the weather.

The first try came via a line out which was driven toward the Farnborough try line and despite the home side trying to cleverly not engage the maul, opposition forwards had been dragged into the drive, which was then driven over and scored by Zak Chiverton. Flux this time knocked over the difficult conversion, for an early 0 – 7 advantage.

Maintaining possession, the forwards recycled the ball and man of the match, Liam Little fed Flux, who charged over from ten metres to score the Hurricanes second try and his second in as many weeks. Converting his own kick, Flux doubled Sandown & Shanklin’s lead, 0 – 14.

Sandown then managed to switch defence into attack, by putting pressure on the Farnborough attacker and force the turnover. Then quick thinking saw the Hurricanes attack outflank the host’s defence, and safe handling set up Chiverton for his second score, after stepping through the scrambling defence. Flux converted the conversion from the angle, to increase their lead to 0 – 21.

A phase later some more quick handling from back row Miselbach set Wedderkop free and into the corner. Flux just missing the conversion, but the Hurricanes went into the break, 0 – 26.

Following the half time interval, Farnborough started the brightest and tested the Hurricanes defence. A sustained period of attack just inside the Sandown 22 by the hosts saw Hopper and Rees come to the fray with their tackling and disruption at the breakdown.

In the middle of the field, the visitors could put pressure on the Farnborough set-piece, and after a turnover at the scrum, the ball was spun quickly to winger Barrett who then sped toward the try line. He was stopped short, and with the ball recycled quickly again, the ball made it’s way to Wedderkop for his second of the game. Flux again converted the tricky conversion, 0 – 33.

With possession secured by Flux after diving on a loose ball, the Hurricanes attack outmaneuvered the Farnborough defence and Sandown flooded through, with Tyson making the break. A smart offload moments later to Shannon saw him charging over the try line. Flux missed the conversion, but the score was now, 0 – 38.

Moments later another attack in the Farnborough 22 was curtailed as the home side strayed offside. The penalty was kicked to touch and with the hosts attempting to not engage the maul again, the Hurricanes were switched on enough to transfer possession, and Richomme charged over to score. Flux again pushed his conversion wide, 0 – 43.

The final score came from Ben Shannon to secure his brace of scores from the bench. He picked up the ball from the base of the ruck and dived over. Flux converted the conversion and secured an impressive fifty-point victory for the traveling Hurricanes.

The full match report is available on the SSRFC Website.