Ryde Harriers celebrate in style at the Awards, Dinner and Dance

Great food, plenty of awards and lots of dancing was order of the day for the Ryde Harriers at their annual celebrations 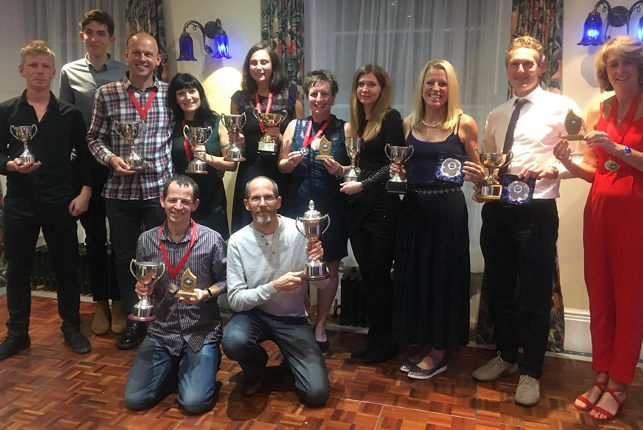 Ryde Harriers came together on Saturday 12th October to celebrate their running champions whilst also raising money for Diabetes.

The club awards were hosted at Yelf’s Hotel in Ryde. The evening started with a delightful three course meal followed by an award presentation.

The awards
Jake Brougham and Charlie Metcalfe were awarded Athletes of the Year, meanwhile Les Cupis and Sarah Peake were given trophies for First Harrier in the Isle of Wight Marathon.

Nigel and Rosie Eldridge were presented trophies for First Harrier over three races in Isle of Wight Fells. Rosie said,

“I was really pleased to have won the Ladies Harriers cup for the fell weekend.”

“I’m proud to be involved in such a progressive year for Harriers, which owes so much to the willingness of members to become Run Leaders and to the existing Leaders who have been willing to do more.”

Winter Series
Andy and Bridget Lewis were both applauded for the Winter 2018/19 Combined Road Nominated Series. Andy came in first with 214 points, closely followed by Bridget with 213 points. Lindsey Stapeley came first in the 5k Handicap, as did Mark Wright.

Adam Tuck completed a five-mile road race in a respectful 30.53, whilst Tracey Dillon came in at an impressive 37.31.

Trevor McAlister and Caroline Dall-Whittall came first for the Combined Winter and Summer series. Trevor was cheered as he graciously received his second trophy for coming first in the track.

The disco got into full swing and most of the Harriers got up and danced the evening away.

Ryde Harriers would like to thank everyone for their generosity in making the Award Evening a great success.