Cllr Michael Lilley said he wanted to ensure that no corners had not been cut. Cllr Mosdell had to leave the chamber to compose herself, saying she was ‘cross’. 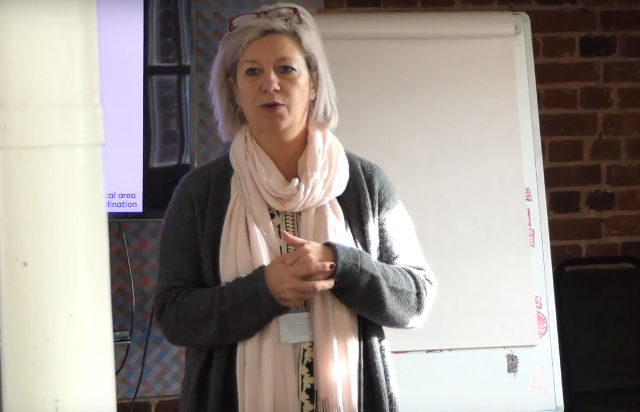 Cabinet voted on 11th July to enter a long-term public health partnership which would see the Isle of Wight share Hampshire’s director of public health.

But the decision was called in for a special meeting last night by Cllr Michael Lilley, who wanted to ensure corners had not been cut.

Cllr Lilley said he had not received sufficient answers to questions about the decision.

The call in was also signed by Cllr Rodney Downer, Cllr Debbie Andre and Cllr Andrew Garrett, chairman of the scrutiny committee.

Mosdell: Left the chamber to compose herself
Cllr Clare Mosdell, the cabinet member responsible for public health, said she was ‘disappointed’ the decision had been called in.

She was clearly frustrated at last night’s meeting and left the council chamber for five minutes during her opening statement to compose herself, saying she was ‘cross’ after being told she was straying from the scope of the meeting.

Mosdell: Low risk decision
Cllr Mosdell said it was a low risk decision and Cllr Lilley’s expectation for such detailed reports ‘fails to take into account the dynamic nature in which this council does business so it’s not tied up with bureaucracy’.

She said in a perfect world all the information would be provided, but in reality the council has ‘very limited organisational capacity’.

Cllr Mosdell said she had been working very closely with the director of public health and it would be impossible to record all their regular interactions, which is why she regularly attends scrutiny meetings to update on her progress.

Lilley: Demanded detail report
Cllr Lilley said he wanted to see a detailed report like the one Hampshire County Council had provided, analysing the proposed partnership.

He said the fact it was a ‘low risk’ decision did not justify the lack of information provided.

“There has to be a proper process and I think there is a mantra with the current national government of this kind of dynamism, of cutting corners.

“Hampshire did not cut corners, they actually did provide information and I feel that should have happened on the Isle of Wight.”

Metcalfe: Difficult and expensive to recruit
The Isle of Wight and Hampshire have had an interim partnership since January 2018, when the Island’s director of public health left.

John Metcalfe, chief executive of the Isle of Wight Council, said it would have been very difficult and expensive to recruit a new director of public health for the Island.

Metcalfe: “If it isn’t broken, don’t fix it”
He said the Hampshire deal would stay within their £132,000 budget, but recruiting someone themselves could have cost more.

“Hampshire know the Island. In short, if it isn’t broken, don’t fix it.”

Cllr Lilley said he received some but not all of the answers he wanted.

The scrutiny committee voted unanimously to accept the cabinet’s decision, but it would continue to be scrutinised by the adult social care committee.

In 2018 Clare Mosdell received an Achievement Award from the LGiU & CCLA.

I am sure providing a comprehensive report outlining the benefits of such an important decision is not beyond her capabilities. One can only assume there is a good reason for its absence.

…..incidentally, I am not sure the angst ridden pose in the photograph heading this article is truly representative, or appropriate, unless it is there for sarcasm.

Not sure what you mean. We have three photos in our library of Cllr Mosdell, one from the election, where she looks very different so we don’t use it anymore, and two taken from video footage of her presenting to a room of workshop attendees. I don’t see her pose as ‘angst ridden’ in the slightest, nor inappropriate.

Well, perhaps it is appropriate Sally. I guess I’m referring to the look of anxiety on Cllr Mosdell’s face. I really do not think she and her Conservative colleagues truly give a fig when it comes to weak and vulnerable on the island.

As rising star Dominic Cummings succinctly puts it, “Voters are right to think Tory MPs largely do not care about poorer people or the NHS”.

Vote Up12-4Vote Down
Alternative Perspective
It’s the body language for the camera and media that amuses me Sally. There was of course Cllr Mosdell’s ‘woe is me’ stage left exit performance to compose herself in the recent council meeting, all wonderful theatre. Bob is a PR master, with his rolled up white shirt sleeves and red braces, his often unshaven face, one could really believe he’s up all night working hard genuinely… Read more »
Vote Up9-4Vote Down
Benny C

If your report and recommendations are good enough they get approved and people run with them. If you’re underwhelming, under researched, under prepared and don’t deliver, they don’t. Common sense rules. Inadequate performance gets exposed. This is our island and our money. You’re elected to respect that. Please do a proper job and make a convincing case or step away.

Dinosaur Dave Stewart’s merry band are at it again. Inept, badly managed, embarrassing and damaging. Vote them out.