Cllr Lilley says that Isle of Wight residents need transparency and honesty about what is happening with this statutory and life-saving/health prevention service. 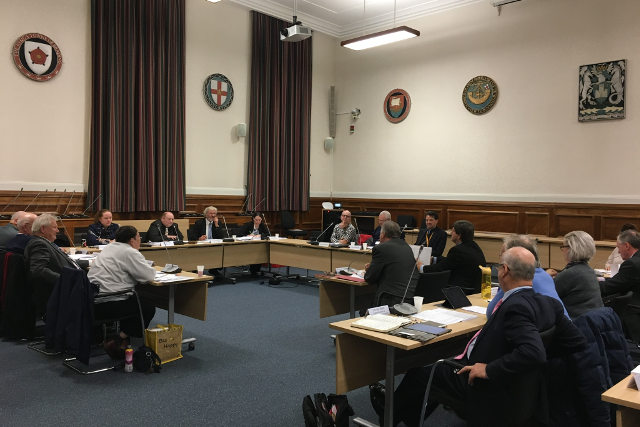 Cllr Michael Lilley shares this latest news, in his own words. Ed

On 11th July 2019, the Isle of Wight Council Cabinet decided to negotiate a permanent strategic partnership with Hampshire County Council to manage its public health service.

Cllr Michael Lilley (Vice-Chair of Corporate Scrutiny) has called in this decision and the Monitoring Officer has approved the Call-In. A special Public Health scrutiny meeting will be held on Thursday 1st August 2019 at 5pm at County Hall.

It represented a unique opportunity to change the focus from treating sickness to actively promoting health and well-being in an imaginative way. The transfer of public health responsibilities to the Isle of Wight Council involved making the statutory appointment of a Public Health Director which went through an appointments panel.

Innovative programme
The new PH Director pushed forward an innovative way of early prevention work through the Local Area Coordinators (LAC) programme which was trialled by a number of local authorities across UK.

The new Conservative Administration in 2017 initially seemed to support the rolling out of this programme, but “something” happened which resulted in the Director leaving.

Local area coordinators scrapped
In 2018, IW Council asked Hampshire County Council to manage the service on an interim basis under the Hampshire model. One of the first acts by Hampshire was the closure of the LAC programme.

This decision by Cabinet was fiercely opposed by opposition councillors and Cllr Lilley tried to Call-In the decision, but was refused by the Monitoring Officer.

Public Health and IW leisure services anomaly
Cllr Lilley has been asking for information regarding Public Health for over two years.

He has continuously raised questions especially about how IW Council has been commissioning annually amounts of £500,000 to £250,000 from the Government funded ring-fenced Public Health grant since 2013 to its own Leisure Department.

This issue has been raised by the external auditor and documented as an “anomaly”. Cllr Lilley has repeatedly asked for explanation about the fairness of this internal funding transfer, especially as non-council sports centres such as West Wight Sports and Community Centre and Ryde’s Waterside Pool Trust do not benefit.

“I am glad I have the opportunity to ask in a designated meeting what has happened behind closed doors in regard to the Island’s public health service. It is steeped in secrecy and when I ask questions I am literally “fobbed” off with non-answers.

“Island residents need transparency and honesty about what is happening with this statutory and life-saving/health prevention service. Public Health is about preventing illness and promoting health and well-being and since I was elected in 2017, I have failed to get information that accurately shows it is doing this important job.”

Lilley: Islanders need to know the truth
He went on to say,

“Now the Cabinet has decided to off load the service under the management of Hampshire County Council without evidence of need, any report on the state of the service that supports this option, any reports on other options, no risk analysis or value for money exercise. Island residents have no information about this decision and its needs.

“I asked 15 questions about this decision and did not get satisfactory answers. All I want is the truth and confirmation proper process has been followed. IW residents need to know the truth.”

‘but “something” happened which resulted in the Director leaving’

Do we know what, or is it subject to a ‘gagging’ order?

Vote Up27-1Vote Down
Benny C
More haze. It’s so depressingly familiar. Dinosaur Dave Stewart says he is ‘evidence led’. So are we all. Let’s hear the evidence, phrased to protect confidentiality if necessary but, equally, respecting voters expectations of accountability and transparency from an elected leader in public office. Time to show us you can do your job, Dave. This is OUR money, our island. Leading it’s administration in a way which… Read more »
Vote Up19-1Vote Down
denbo17

The Council Leader Dave Stewart does not need competence, leadership, intellect, transparency, honesty, vision, energy, factual accuracy, business acumen, innovation and continuous improvement, because he already has them, and then to see the smile on his face after listening to all the feedback that had put him in the position of Council Leader. “LFTMMRT”

Is this meeting open to the public?

Good question, and if so does the meeting take verbal questions from the public?

Ridiculously, public questions not allowed as it is a ‘special’ meeting.

So much for openness and democracy from these unashamed clique of reprobates.

Vote Up10-2Vote Down
Benny C
Dave Stewart has displayed precious little skill in these core areas since taking office and talking the talk is one thing, it might get you elected, but we need people who walk the walk too. From the customers side of the fence, a lot of clear evidence suggests he isn’t right for the role. Even areas where information is easy to access and understand, like climate change,… Read more »
Vote Up5-2Vote Down
Stuart George

I’m not defending Dave Stewart, but I don’t see why he should be attacked for his age, colour, or gender, none of which he can change.