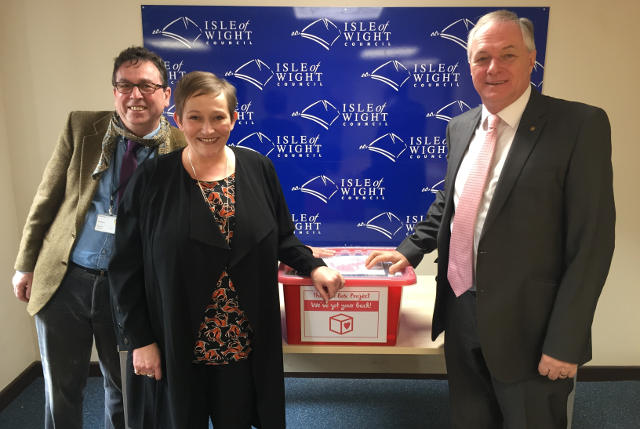 After Cllr Chris Whitehouse’s attempts to have the Red Box project written out of a motion of support, the Isle of Wight council share this great news. Ed

The Isle of Wight Council has pledged its support to the Red Box Project to help tackle period poverty in Island schools.

More than 20 schools on the Island already work with the project to provide sanitary products for pupils.

“I’m grateful Katharine has started this service on the Island – she has huge experience in this area and we’re pleased to work with her.

“It’s a simple system but one that can make a huge difference to girls and young women in our schools.

“I encourage all schools to look at their own policy for period poverty and if they don’t have one to contact the Red Box Project.”

According to a 2017 study by Plan International UK, one in ten girls aged 14 to 21 were unable to afford sanitary products and one in seven struggled to meet the cost.

Nearly half of those who took part were embarrassed about their periods and took days off school because of it.

“This was a very positive meeting and I’m pleased Councillor Brading recognises the need for action to tackle period poverty and also the need for menstrual wellbeing education in schools.”

The project supplies schools with a fully stocked box with information about its contents and Katharine ensures it’s regularly topped up.

“I am delighted Councillor Brading has fully endorsed the Red Box Project and has recognised the innovation and enthusiasm of this community inspired initiative, which is changing young Islanders’ lives.

“Katharine and the Red Box volunteers are Island heroes, in my eyes, who identified a hidden issue and took action.”