Despite there being close to 3,000 signatures on a petition to stop housing on Seaclose Park, the leader of the council said that the feedback he’s had was that “Newport Harbour Masterplan has been well-received” 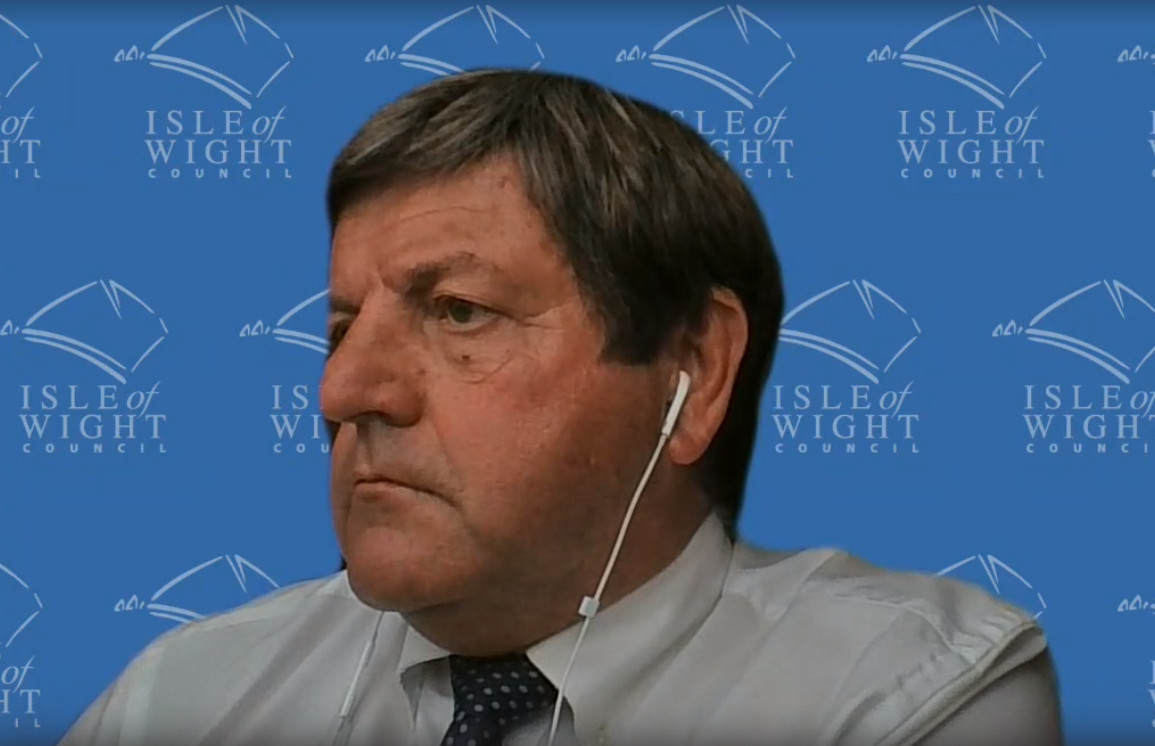 With nearly 3,000 signatures on a petition to stop housing on Seaclose Park, the leader of the Isle of Wight Council has said he will meet with those involved to try and take things forward.

Last week, a petition was started by Cllr Matthew Price, ward representative for Newport North, to object to proposals in the Newport Harbour Masterplan which involve building on the entrance to Seaclose Park and the currently still-standing Fairlee Service Station.

More than 40 houses are outlined for the area fronting onto Fairlee Road, and Cllr Price argues it is unacceptable, ‘chewing up swathes of green amenity space’ and potentially having a negative impact on the Isle of Wight Festival.

Stewart: Plans were “well received”
However, in a recent report to full council, Cllr Dave Stewart, the leader of the council, said the ‘ambitious plans’ for Newport Harbour had been ‘well received’.

“Seaclose has created many waves within the Newport community since it became apparent cabinet might approve the masterplan and housing built on the front of Seaclose recreation ground.

“Can I ask the leader if he thinks nearly 3,000 signatures on the petition and to date, 12 of the 13 Newport and Carisbrooke Community Council members have also endorsed a proposal calling on the cabinet to reject that element of the masterplan. Does he consider that well received?”

Stewart: Price has raised some very strong points
Cllr Stewart said, taken as a whole, the feedback was that the masterplan had been well received.

“Taken as a whole, the feedback I’ve had is that Newport Harbour Masterplan has been well-received.

“However, and in fairness to you and Cllr Price, who has been working really hard for his ward and his community in raising issues, on that particular element I can assure you and the public we will be meeting with Cllr Price and taking forward decisions around that, once we have had that opportunity to consider it.

“I think there are some very strong points Cllr Price has raised and I am also aware of the Newport and Carisbrooke Community Council vote the other evening which express concerns, and as we are a council who wants to work with our community I want to assure you that those important considerations will be taken into account.”

September cabinet meeting
The masterplan is set to be discussed at cabinet in September now, as the meeting first scheduled to take place next month is no longer going ahead due to the break typically taken in August for council meetings.

There it will be decided if the harbour masterplan should be accepted as a supplementary planning document for any further planning applications to change the Harbour.

Housing in phase one
In the masterplan, it says the houses thought to be built on Seaclose will be done in phase one of the regeneration plans to help pay for the further development of the harbour, which the council says will be a ‘cultural destination’ when complete.

Welcome to the world according to Dave. Only trusted Tory Party members are permitted to give feedback.

Vote Up750Vote Down
Steve Goodman
Evidently, Dave still doesn’t do well with easily available evidence; I’m reminded of one report OTW in April last year: “‘Climate extinction, emergency everything’ is ‘un-evidenced’ says Isle of Wight council leader, Dave Stewart Leader of the Isle of Wight council, Dave Stewart, says he’s “done some research” on the IPCC special climate emergency report but believes the ‘climate extinction, emergency everything’ position is “un-evidenced”.” Perhaps Dave… Read more »
Vote Up200Vote Down
Steve Goodman
For disrespectful Dave, or whoever filters feedback for him – some related suggestions which might actually be genuinely and generally well-received: As respected Cllr. Matthew Price pointed out, Fairlee Service Station is a long-standing, successful local business with no current plans to close or relocate, which we should be looking to support not looking to evict. It is not too late to learn the costly lesson of… Read more »
Vote Up150Vote Down
Chiverton Paul

As the council leader Cllr Stewart does need to review a) How the council engages with the public on projects and b) how he interprets the results.
How he can say Seaclose park has been well received beggars belief. Unless it is feedback gained in the same vein as the St Marys roundabout public meeting where he demonstrated an inability to actively listen or answer a question.

Vote Up700Vote Down
Colin
The St Mary’s roundabout meeting at Medina theatre was indeed a shambles. The IWC had bought a re-arrangement of the junction from “experts” but were unable to explain how the junction was going to work. Probably similar to the Newport Harbour scheme with little understanding of how it will impact upon the town. Now that lockdown has ended, it is interesting to see that the changes to… Read more »
Vote Up630Vote Down
Colin

oops, that should be “traffic flowing more freely in the left hand lane as a result” oh for an edit option…

Vote Up220Vote Down
Geoff Brodie
Matt Price is the only consistently sensible Tory. He opposed the St Mary’s junction craziness and is now opposing this proposed and disgraceful Seaclose land grab. What he is doing with the Tory mob I just cannot understand. This week he had one particular colleague refusing to support him about Seaclose, then agreeing to support him and then reverting to not supporting him. I work very happily… Read more »
Vote Up59-1Vote Down
tony

It would be such a shame to loose green space so close to Newport town centre.

Sadly, one of the 12 Community Council members changed his mind subsequently. Richard Hollis decided to abstain along with the 13th member, Steve Hastings, an IWC Cabinet Member. Neither have roots in Newport, living in Cowes and Brighstone respectively.

Thus typifying the ‘I’m all right Jack’ mentality: why should they care what happens in Newport? How short-sighted, selfish and disappointing.

Now you can understand how the residents of Cowes and East Cowes felt in relation to the floating bridge. Comments from Newport residents and councillors across the Island gave the “I’m alright Jack” attitude you talk about.

@walkingwizard: Cowes resident here, but it does not stop me from being concerned about other parts of the island.

I am a Newport councillor. I don’t recall being anything but supportive of residents in Cowes & East Cowes over the floating bridge debacle.

Vote Up360Vote Down
the auditor
It surely beggars belief, that any Council Leader having received a petition bearing 3000 signatures can pronounce ‘the proposal has been well received. Which planet is he living on? Any political, in national or local government should rightly be concerned. The Great Leader is guilty of believing the hype of his party, whose incompetent handling of the Covid 19 pandemic has affected thousands. Regrettably, the Isle of… Read more »
Vote Up530Vote Down
chausettes

Is Dave; deaf, crooked, or just a fool? We can conduct an opinion poll to find out, then I’ll ignore the results and just tell you which of the options I think instead. 👍🏼

He’s all of those things and more chausettes

Well received by whom? His mates?

It is my understanding that the Niton residents think he is wonderful. So difficult to get rid. But then most of the I of W is conservative. What a weird world we live in.

If they think he is wonderful they all must have white sticks, golden retrievers and be deaf

Vote Up19-2Vote Down
6iraffe5loth
Is it really that hard to understand why people might not want houses built in Newport when: *It’s one of the few large green public spaces left in Newport *It is near impossible to get any services already. Doctors, hospital, schools, police etc. are all under funded. There are no appointments and there is no support. Where will the new people go? *There are old broken buildings… Read more »
Vote Up150Vote Down
Benny C
Good to see Dinosaur Dave , he appears to be wearing a smock. Or a blouse. Keeping up with the times! This development is another fine mess waiting to happen. It’s not that bright a plan. Definitely got the graduate architect onto that one. But Dave doesn’t distinguish. St Mary’s roundabout , didn’t listen. Floating bridge, didn’t pay attention. Wayward councillors, too weak a leader to deal… Read more »
Vote Up120Vote Down
Spartacus

Sick of seeing his self profiling