The Isle of Wight Labour Party Chair says “Islanders need to listen to the campaigners of ‘IoW Save Our NHS’, and make their voices heard, before their NHS is stripped away”. 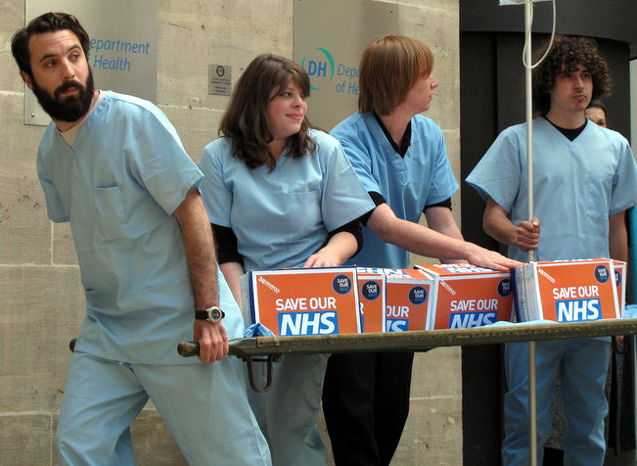 At an all-member meeting of the Isle of Wight Labour Party, members heard how NHS England is consulting on plans to break up the NHS into “business units” known as “Integrated Care Providers”, or ICPs.

Private firms will then be able to bid for these business units, including potentially replacing NHS provision on the Isle of Wight.

Little consultation
The plans for the proposed business units are being brought in with little consultation or information to the public, and take the privatisation of the NHS further than the Sustainability and Transformation Plans which the government has already imposed.

It was opposition to the STP for the Isle of Wight which brought hundreds of Islanders on to the streets of Newport last year to protest about proposed cuts to provision at St Mary’s.

Removing accountability
Labour member, and stalwart of the Save our IOW NHS campaign, Christine Lightbody, said:

“These ICP plans could see fragments of the NHS managed by non-NHS, non-statutory and therefore less accountable bodies. They are the embodiment of government plans to disperse the NHS and its staff, drive down public funding, promote private contracts and put cost limits and profit before patient safety.

“In Hampshire and the Isle of Wight plans are already being drawn up to move towards ICP arrangements, just like the STP this will happen without any debate or involvement of the public or NHS staff who will be directly affected.”

“Last year, we broke the news of the proposed cuts to St Mary’s, and the Conservative council and Isle of Wight Conservative MP, Robert Seely said we were “scaremongering”. Then, weeks later, those planned cuts were confirmed.

“Here is another case of the Conservative government, supported by our MP and the local Conservative council, smoothing the path for the privatisation by stealth of our NHS. Islanders need to listen to the campaigners of ‘IoW Save Our NHS’, and make their voices heard, before their NHS is stripped away.”

After hearing a presentation about the cuts, members at the meeting voted unanimously that Labour should actively oppose the introduction of ICPs.

The Government should use the £bns they have stashed away under their magic money tree, and lift NHS Trusts out of their engineered deficits, fund their operations adequately and release our health professionals from the shackles of austerity to perform what the do best, care for those in medical need.

Vote Up22-1Vote Down
paulschofield
It is astonishing that anybody would ever vote Conservative when it has been crystal clear for a long time that a Conservative government consistently underfunds our National Health Service, and repeatedly tries to privatise it so that a lot of money can be diverted from the public funds to the ever waiting, greedy and selfish private hands of the few. To vote Conservative means to shoot oneself… Read more »
Vote Up14-2Vote Down