This new sustainable route will connect communities and allow them to appreciate the spectacular wildlife in the lagoons. 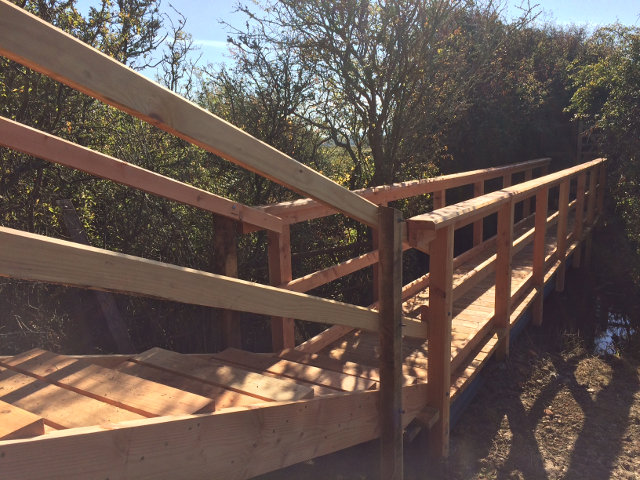 David shares this latest news on behalf of Isle of Wight Ramblers. Ed

A number of improvements have been achieved following the completion of a major project by Isle of Wight Ramblers. Footpath B4 connecting Brading and St Helens has been cleared, waymarked and a stretch relaid to reduce flooding in this wetland area. Footpath B2 along the 16th century embankment has been widened and a new stepped bridge built over the River Yar. A year in the making
The project was conceived over a year ago. There was a footpath diversion, as well as negotiations and agreements with landowners, Natural England and the Environment Agency. The cost of £15,000 was funded by grants from East Wight Landscape Partnership, Isle of Wight Council and from a legacy fund held by The Ramblers.

A chance to appreciate wildlife in the lagoons
David Howarth, Area Chair said,

“I would like to thank everyone for their support with this project and for the work by our volunteers.

“This is an important wildlife area managed as a wetland adjacent to the RSPB reserve. We appreciate the permission given by the landowners.

“I hope that more people will use this sustainable route for connecting the communities and to appreciate the spectacular wildlife in the lagoons.”

Congratulations to the Isle of Wight Ramblers! These footpaths are popular with walkers and the improvements will make the routes much easier and pleasanter to negotiate. I am looking forward to trying out the new facilities as soon as possible. Many thanks for all your hard work.

In my adolescence I spent hours getting lost & ending up in some bog on my commute to Brading Haven Yacht Club. Thank goodness.