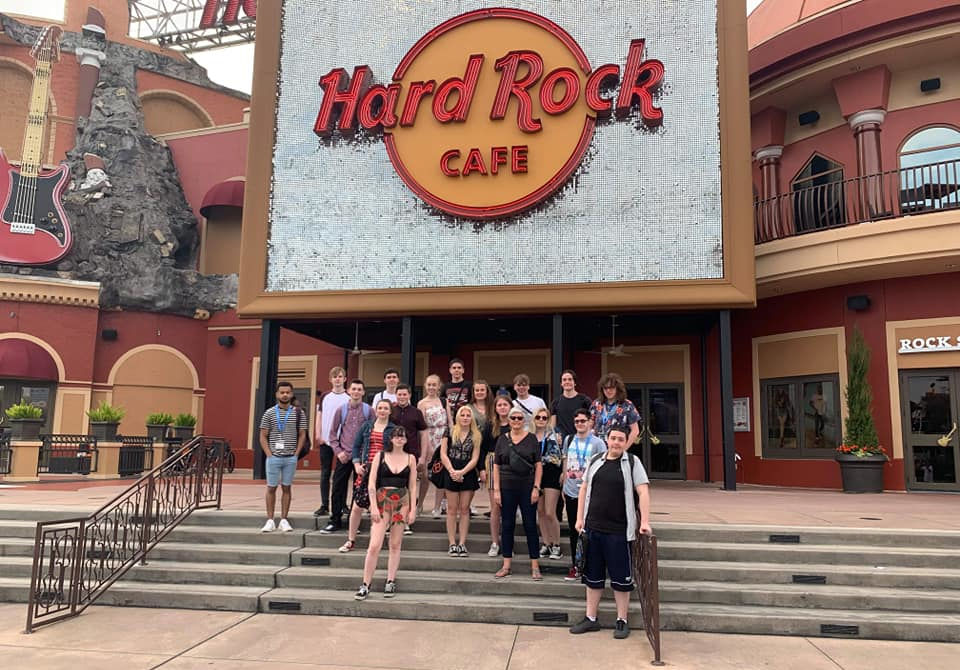 Gemma shares this report on behalf of The Island VI Form. A trip to Universal Studios, part of the Universal Film Entertainment Group which is headed by Dame Donna Langley, a former Carisbrooke high school pupil. Ed

The aim of the trip was to take students beyond the classroom, to inspire them and to give them an unforgettable learning experience where they would see the reality of careers in the film and media industry.

They stayed on resort at the Endless Summers Surfside Inn Hotel and took part in three educational programmes at the Universal Parks. They also visited the Kennedy Space Centre Visitor Complex, as well as having some free time to explore.

Kennedy Space Centre
At the Kennedy Space Centre, students got an up-close, hands-on feel for the story of humans in space. They explored areas such as the filming of ‘the space race’ to the marketing and production of special events and launches.

They also learnt about the future of space exploration and even had lunch with a real-life Apollo astronaut!

Special FX tour
The third educational programme was the Special FX tour. This three-hour tour included a few of the most popular attractions.

From movie-making magic to the artistry of Universal Orlando’s Horror Make-Up Show, students gained a new understanding of the innovation and creativity that goes into developing one of the world’s most popular theme parks.

This provided self-assessment tools to define several areas of interest for students, then covered the entire process from application to interview and personal brand to work values, with a hands-on project based around Universal’s careers development scheme for employees.

Unique insight into world of film and media
In addition to the educational programmes, students had plenty of free time to enjoy the attractions and shows within the parks.

They also had a day at Volcano Bay Water Park and enjoyed their evenings at the CityWalk complex where they had a meal at the Hard Rock Café and watched the legendary Blue Man Group.

Overall, this amazing trip gave students a unique insight into the world of film and media which brought their learning to life and helped to raise their aspirations for the future.

Potential to achieve whatever they put their mind to
Trip Leader and teacher at The Island VI Form, Peter Cronin, said,

“Seeing the students bond together and undertake so many new and different activities is one of the great results from these trips.

“Friendships are made for life and students realise that they have the potential to achieve whatever they put their mind to.”

They certainly embraced the opportunities presented to them and made memories that will last a lifetime.

The quotes below from some of the students demonstrate this.

“Seeing the inner operations of the rides and the parks was great, along with mixing with people who I would otherwise have never met and are now real friends”.

“If I wasn’t sure about Film as a career, I certainly am now, I learnt so much about myself and what I need to do to achieve my goals”.

“I didn’t know what I wanted to do in the future, but this trip has given me real insight into possible careers and routes to the future”.

“The trip was life changing! It opened my eyes to so many areas I would not have thought possible”.

“I just wanted to say a huge thank you for the trip, I don’t think you realise the effect you’ve had on all of our lives, you’ve gifted us memories we will cherish for the rest of our lives”.