Great racing from the Wightlink Warriors and super encouragement from the Cheetahs Supporter Club. 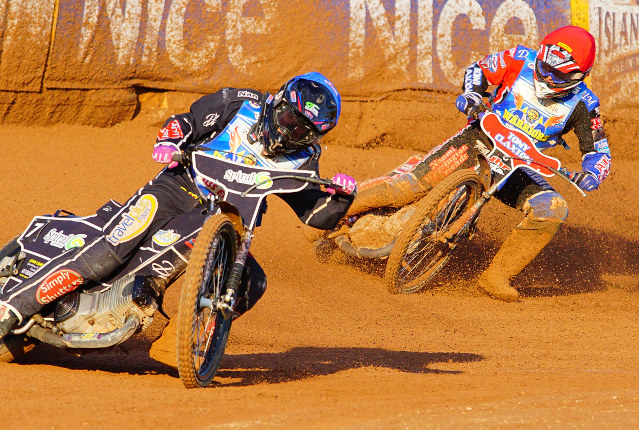 Isle of Wight 54 Oxford 36
In a very special challenge fixture aimed at assisting the revival of speedway in Oxford, the Isle of Wight ‘Wightlink Warriors ran out winners but the score line could have been so much closer had the visitors not suffered two unfortunate falls and a lack of punch from their lower order riders.

Roared on by what appeared to be the largest crowd of the season that was bolstered by some magnificent travelling support, the Warriors bright start saw them ten points to the good by mid meeting, however they did benefit from a fall by Nathan Stoneman when closing in on the lead of heat four and later in heat ten when Connor Coles flipped off the back of his bike on the last turn whilst a sure fire race winner.

Fortunately both Stoneman and Coles were unfazed by their look at the Smallbrook shale, as they raced on with courage and determination for the Cheetah’s cause. Joining them at the top of the visitors score card was Danyon Hume who also impressed with three consecutive race wins.

A solid team effort
On the Warrior side, it was a solid team effort led by the returning Georgie Wood, who dropped just one point in five rides after an engaging battle with Stoneman in heat six. In fact Wood saved his best until last with a thrilling chase in the last race to catch and pass the same Cheetah for a 2-1 advantage on the night.

Also in the points was Chris Widman who delivered his best return in recent weeks, and Connor King whose persistence (that included having to push his bike for the last half lap on heat eight to gain a point) earned him a place in the top scorers at the end of the meeting.

Bishop: Excellent racing
Warrior’s co-promoter Barry Bishop, known to have Oxford connections, was a very happy man and after the meeting he said,

“Great stuff. Excellent racing. Lots of family fun. The Cheetahs a little unlucky that the score ended up as it did, but the Warriors clicked tonight and I am so pleased to see Chris Widman looking strong.

“I just want to say a huge thank you to the Cheetah’s supporters who came over for the meeting and to their Supporters Club for making it happen.”

Bishop: Oxford deserves speedway
He went on to say,

“Oxford deserves speedway and I hope that those people with influence in that city see what happened here tonight and respond positively to all the hard work that never stops to revive the club. The Warriors will continue to assist in whatever way we can if it brings speedway back to life.”