Jonathan returns with his Sunday column and this week shares more of his though-provoking advice for life. As always, a great read. 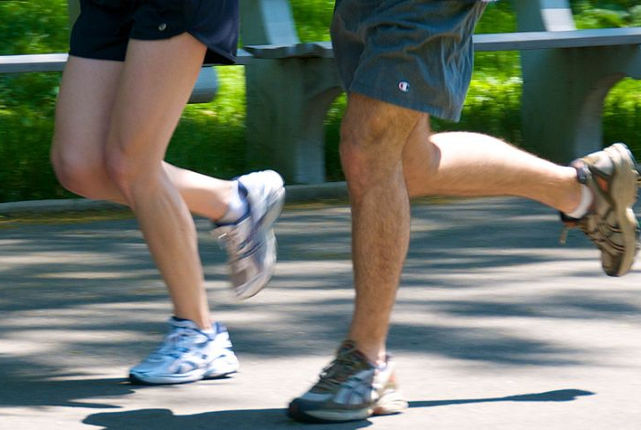 I recently bought two pairs of running shorts. They aren’t the sort that Steve Ovett and Seb Coe used to wear, that looked like they were wisps of cloth about to blow off in the slipstream, thank goodness. I remember those days, pre-Lycra, when Brits ruled the middle-distance running world, and I managed to watch the Olympics sometimes. My new running shorts aren’t like that at all, they’re very similar to the last batch of sensible running shorts I bought, but they would never have fit me before.

Something strange happened a year ago. I didn’t notice at first, but eventually it became obvious even to me, because my trousers started falling down. I had lost some weight. Not just some, either. I went down from a slightly tight 38” waist to a loose 34”, and, due to the inevitable variation in the sizing of clothes, I even got into some 32” trousers. This was all very annoying. At first I got away with tightening my belts, but after a while I had to make new holes so I could pull the belts tighter. Then the belt-ends became so long they started to trip me up, so I had to cut great chunks off them.

A large plastic bag of rubbish overfilling a bucket
Eventually, I realised that there was no avoiding it any more, I was going to have to change my wardrobe. I bought a variety of new trousers and a couple of much smaller belts, and some of my shirts needed to be replaced because there was so much to tuck in, and all that extra material hung all round, overflowing my waistline like a large plastic bag of rubbish overfilling a bucket. It wasn’t a good look. Even I recognised that. The rest of my clothes seemed to get away with it though, my coats feeling roomier, and the tee shirts being loose anyway. I did need to replace the running shorts though. Some of them relied only on elasticated waists, and these were in danger of falling through gravity alone, especially with my new phone in one pocket. It’s a rather large phone, and I need it so I can record my progress, and listen to music on my lovely cordless earbuds, through the miracle of Bluetooth. I discovered that Bluetooth is named after a tenth-century Danish king, of all things. I know it’s because he managed to unite lots of disparate groups of people, but I can’t help visualising him doing it with earbuds in. I want to know what his playlist would have sounded like. Probably the Pogues, on a bad night.

It might swing around and deadleg me when I run
The phone is large because I got fed up with phones that look good but whose glass breaks as soon as you look at it, and which smash when they’re dropped. I also get bored with having to plug them in to recharge all the time, and the constant wondering where all the USB cables went. After a lot of research I found an armoured phone guaranteed to be droppable from a great height, completely waterproof, with an enormous battery, so it lasts a whole week without needing to be powered up. It has a name I’ve never heard of, and it was quite cheap, compared to the big sellers. But it’s heavy, so I have to have secure pockets, otherwise it might swing around and deadleg me when I run. The other unexpected advantage in buying that particular phone is the look of disgust I get from anyone young when I lever it out of my pocket. I can see that it’s probably the least stealable mobile phone in the world, except maybe those clunky things I’ve seen old men sometimes pull out of their rucksacks on the bus, great big things, the equivalent of old Bakelite phones, with small screens and big buttons. I swear I once saw one with a dial, and a big brass bell on it. Mine doesn’t look a bit like that, but it is a big beast. I feel fairly confident nobody would want to snatch it from my hand. If they tried to, but the weight of it would drag one arm down as they ran, and they’d probably topple over. Alternatively, it would make a formidable weapon if wielded in anger, although that wasn’t part of the marketing. I could definitely hammer nails in with it, whilst listening to a variety of music from all the ages of civilisation, available on shuffle. I do love my new phone.

Luridly-coloured trainers that you couldn’t possibly run in
I suppose carrying a heavy weight like that is good for training. I needed to get new shorts with a zipped pocket that would keep it close and not allow it to shift around too much, from a health and safety point of view. So I set out one day recently to buy some running shorts. I don’t want anything too expensive, with large labels all over, like those rappers muttering in those music videos, and I don’t want anything too skimpy, because of the phone. I just wanted some shorts, of sturdy construction, with zip-up pockets and a drawstring so they could be secured, in reasonably plain colours. I tried all the normal shops, and all they had was beachwear. I tried all the fashion clothiers, and all they had was the sort of thing I see fifteen-year-olds wearing. I tried the sport shops, but nobody in any kind of sporting mind would be seen dead in the ridiculously-overdesigned expensive sportswear there. Eventually I went into a shoe shop that only seemed to have luridly-coloured trainers that you couldn’t possibly run in, and found a blessed rail at the back filled with the ideal shorts, and some of them were even in my new size. Miraculously, they were also not very expensive, so my joy was complete.

Tee shirt abuse
Because the weather has been cold, I joined a gym again, and I run on a treadmill next to many others who mostly walk, which makes me feel good, or run much faster than me, which makes me feel inadequate. They all seem to wear a lot of Lycra, and the other day I was taking my tee shirt off and realised it was covered with small splashes of different-coloured paint. I had forgotten that the ideal accompaniment to smart new running shorts would obviously be smart new tee shirts. I realised that I had for many years had two piles of tee shirts. First, there’s a pile of tee shirts I love, because of their memories, or their design, or my favourite quotes across the chest, and the second pile is for randomly wearing whilst decorating, or gardening, or going to the gym. I never thought about it, but I knew I wouldn’t want to subject a favourite tee shirt to the kind of abuse I put a tee shirt through whilst engaging in any of those activities. I really should throw some of them away.

16 big bags of sugar, not in your shopping trolley
I may be the only person I know who actually mends tee shirts, but I don’t do it very often, so the holes have to get quite big before I get round to it. I was dismayed the other day to find I’d accidentally put my hand through a hole in the armpit of a tee shirt instead of through the sleeve. I’ve never been much of a person who dresses the part. I remind myself sometimes of the people in the Hitch Hiker’s Guide to the Galaxy, who couldn’t invent the wheel until they decided what colour it should be. But I know it’s time now to find some new tee shirts, so I can reluctantly downgrade some old favourites to the gym tee shirt category, and then throw away the worst of the holey ones. I may not be alone in this, it might even be a very common bad habit, but I must be one of the worse examples out there. The whole point of this addled ramble is that I lost about two and a half stone in about six months. Not because I was ill, not because I was on a diet, but because I needed to make some changes, partly because life was imposing other changes on me. I started running outside, and I ate less, and consequently I lost weight. When I got to a shape and size I liked, I started to eat a bit more, and I’ve stayed more or less the same since, apart from a binge at Christmas. I always used to say that it’s just Physics, a matter of energy in and energy out. But the thing about exercise is that it gets your blood moving, and it’s good for your breathing and your joints, and the movement of your muscles and your body through the air causes the weight to come off different places compared to eating less and not moving. I googled two and a half stone, and that comes to 35 pounds in old money. 35 pounds is nearly 16 kilos. That’s 16 big bags of sugar, not in your shopping trolley. All that was in me, and it isn’t there any more. I find that astounding. And exhilarating.

With the permission of all those versions of myself that I used to be
I’m going to do a proper run this summer, 10k in public, which is significant because I’ve never run more than 5k at a time, and now I’m running into unknown territory, I’ve just managed 6k without stopping, for the first time ever. I’m doing something that my previous self would have scoffed at, actually training. I don’t have a personal trainer, and I’m not following a book or a regime, I just run a little bit farther every time, and I hope by July to feel confident enough to last the distance and not make a fool of myself. But if I do, I’m not going to fret about it. What I’m really trying to say, with the permission of all those versions of myself that I used to be, is that there’s always the possibility of change. Sometimes change comes through some sort of accident, sometimes it creeps up on us, sometimes we want change but we don’t know how, and sometimes we need to commit to something and get on with it. I love that it’s possible to change, and I love that it’s possible to adjust to new challenges. Life happens to us, and we either accommodate ourselves to new circumstances or we become bitter, but sometimes we can help ourselves along by making the best use of what we have. There’s always a choice, and there’s often a surprising bonus. To misquote Gandalf – “All we have to decide is what to do with the time and circumstances that are given us.”