Letter to the Editor: What is happening with the Ventnor Winter Gardens?

Stewart Blackmore questions George Brown over the sale and deterioration of the Ventnor Winter Gardens.

We always welcome a Letter to the Editor to share with our readers. This one from Ventnor resident, Stewart Blackmore, relates to questions he raised at last night’s full council meeting.

Readers will remember that we got in touch with the council at the beginning of the summer asking whether something could be done to make the building look better over the holiday season. We were told that our suggestions were passed to the relevant council officer in Property service, but we haven’t heard back. Ed

On The Wight readers, and Ventnor residents in particular, may be very interested in the responses to a question I asked at the meeting of the Council on Wednesday last about the Winter Gardens.

“With regard to the purported sale of the VWG to the Hambrough Group, has the sale been finalised by contract completion, and is the completion subject to any get-out clause if, for example, there is a negative survey report.”

I went on to ask why the building had been allowed to look tawdry and unkempt and why the Council hadn’t insisted that it be given, at the very least, a cosmetic makeover pending building works.

No one’s responsible
Cllr Brown’s response to this was that (and I paraphrase) no one was responsible until the lawyers had sorted things out.

I can’t be the only one to find this state of affairs bewildering.

It seems to me that there is plenty of wriggle room allowing the Hambrough to walk away if the re-build costs escalate.

Has the Winter Gardens been sold or not? You couldn’t make it up!

We thought it might be helpful to give a recap of some of the background – Ed.

Details of the conditions of the sale can be found in the appendices to the Delegated Decision Report issued back in September 2011.

This states that “Completion is to take place within fourteen days of Satisfactory Planning Permission being obtained.” 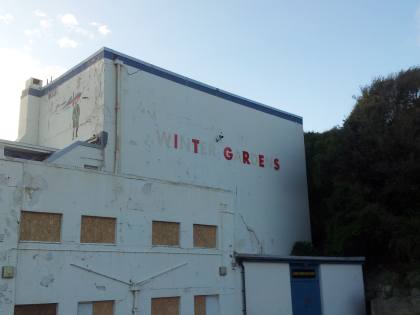 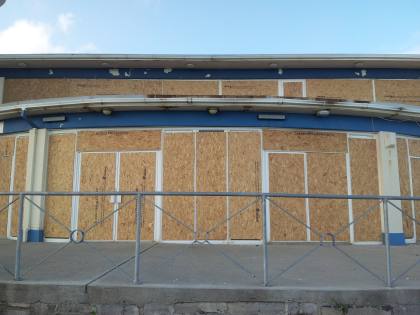 Filed under: Letter to the Editor, Ventnor

24 Comments on "Letter to the Editor: What is happening with the Ventnor Winter Gardens?"

I wouldn’t worry, Shanklin Theatre is still not signed over after 2 years

So, assuming the application is approved as normal, it’ll be the start of November at least before completion.

Hopefully, due to the low number of comments this time round, it won’t go to committee, which could delay it into December or even January.

Could it be that the buyer only wants to complete the purchase if they get satisfactory planning approval? It certainly appears that way.

Vote Up00Vote Down
random bloke
i dont know any buyer who wouldnt want to ensure satisfactory planning permission is in place before they buy. The Hambrough group is a business, and will not sign until their lawyers are satisfied. Of more concern is the statement that “no-one” is responsible for the building until the lawyers sort things out. Its rubbish. The current owners, ie the IOW council are responsible for the upkeep… Read more »
Vote Up00Vote Down
Stewart Blackmore
Jon, you make thinks that taring the building up is a ‘waste of time and money’, but it would be a very small price to pay. this is an iconic building and anyone walking to and from the town will notice it. The reason I asked the question of Cllr. Brown was precisely because of the number of comments I have heard from townsfolk and visitors. Does… Read more »
Vote Up00Vote Down
random bloke
of course it matters. but it wont change a thing. the council is denying responsibility because they dont want to spend any money whatsoever this close to completion. And quite frankly, I dont want any of my tax money to go on it either. Completion should happen as quickly as possible, and the new owner should start work immediately. You could say that any derelict building is… Read more »
Vote Up00Vote Down
Stewart Blackmore
All well and good, Jon, but the reason that the building is in its present state is because the Council did not face up to its responsibility. The fact is that the Council STILL owns the building and so has a statutory duty for it. Imagine a scenario where it gets into a worse state of disrepair and someone gets injured by some falling masonry. Your tax… Read more »
Vote Up00Vote Down
random bloke
The council have fulfilled their statutory duty by boarding the place up. Anyone trespassing on the property has only themselves to blame if they get injured. The council should be, and appear to be, concentrating on getting it sold as soon as possible so the new owners can start work. About the only thing the council might need to do if the legal process drags on is… Read more »
Vote Up00Vote Down
Binnel ghost
It was so obvious from the outset that this would be the outcome. those of us who said so were castigated as old fogeys – anti change. BUT we wanted change , we wanted the Winter gardens to be properly and efficiently managed after years of mismanagement. We wanted it for our town, our community. the loss of the Winter Gardens has taken the heart out of… Read more »
Vote Up00Vote Down
Stewart Blackmore

What about a toddler who runs away from a parent? Nothing is open and shut (no pun intended) and a boarded up building does not mean that it is safe.

And no, the site hasn’t been fenced off.

Vote Up00Vote Down
random bloke
you could wrap the entire building in cotton wool and it still wouldnt be safe. any toddler who can run fast enough to reach the building before the parent stops them should be in the Olympics. You are quite right, nothing is open and shut. But does that mean the council should be planning for every contingency? In any case, you started by saying that the building… Read more »
Vote Up00Vote Down
wightywight
@Jon: Maybe they should be talking to others who have an interest in buying the building? Actually, maybe they should all go next May so that we might have people elected who want to put an end to this approach to our cultural heritage. What you have to ask yourself is IF things such as Shanklin Theratre can be operated and run by people without anything like… Read more »
Vote Up00Vote Down
Stewart Blackmore
Ahem, I think you will find that I did not write that it needed substantial repair, but I am happy to remedy that! Even a cursory glance at the report that the Town Council commissioned makes that very clear, Jon Temporary cosmetic repairs would have got it through the summer; they could even have kept the bar open this summer! You shouldn’t be so flippant either about… Read more »
Vote Up00Vote Down
random bloke
you are talking about bits of masonry falling off the building. that is a substantial repair. Temporary cosmetic repairs could have kept the bar open? ridiculous. The council wouldnt and shouldnt be paying wages for bar staff unless the rest of the building is open too. They wouldnt come close to breaking even. 12 feet away from a pond is a far cry from about 20 or… Read more »
Vote Up00Vote Down
Stewart Blackmore

I think I get your drift Jon, and I also think I know where you’re coming from so let’s leave it there.

I implied nothing of the sort, Jon. I neither know nor care where you work. I was talking about your views being apparent.

Must have touched an exposed nerve though.

Vote Up00Vote Down
random bloke
as I made clear, I assumed that implication, just as I assume the comment about an exposed nerve is more of the same. You certainly didnt say it, but the implication, or perhaps the correct word is insinuation, was perfectly clear, and also completely incorrect. If youve touched any sort of exposed nerve its the one where people on here seem to assume that anyone with any… Read more »
Vote Up00Vote Down
mywifesheelsr2high

Well done Stewart I think your right now Ventnor is looking good and on the up the last thing it needs is a derelict building ruining the view.

The problem is that there is no urgency about anything on the Island, unless its to close things.Two complete tourist seasons with a closed wintergardens looking like a building in a Syrian war zone. All the developer needs to do is to keep revising the plans, and it will stay as it is, a blight on the town.

Vote Up00Vote Down
Chris Welsford
I can assure you Stewart, the Isle of Wight Council is responsible for the Winter Gardens and will remain responsible until it changes ownership. After you had left the Full Council meeting in September I followed up your question, which I felt had not been adequately answered. The answer I got is published in the minutes for that meeting, as is the answer he gave you. He… Read more »
Vote Up00Vote Down
Stewart Blackmore
Many thanks Chris and thank you. I was at Full Council tonight but didn’t see you. I thought that the Tories were very nervous tonight and Edward Giles was particularly edgy in his response to you. I bumped into Sally outside as I was leaving and I told her that I wish that I could have asked a question at the end after listening to David Pugh’s… Read more »
Vote Up00Vote Down
chris welsford
You didn’t see me because I was sat in my chair in the members area immediately below you Stewart. The trouble with questions is that they are limited and you arde under pressure not to get stopped for making a statement even if that statement is pertinent to the question and in fact, necessary to make sense of the question. The answer on the other hand can… Read more »
Vote Up00Vote Down
Stewart Blackmore
I entirely agree with you on the custodian issue, Chris, especially at local level. I understand what you say about the cost of upkeep and maintenance but I am more concerned with the fact that there are plans to keep the Coastal Centre as a Community asset and, in that particular circumstance, there should be an acknowledgement that this is a special circumstance, whereas the WG is… Read more »
Vote Up00Vote Down