If you fancy a night in watching a DVD, then take a look at the selection available at Island Libraries. At just £1.50 per night, they’re a great bargain. Ed 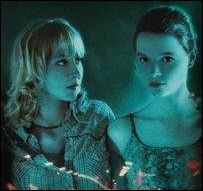 Originally released in Germany in 2002 cinematically, Ventnor Library accesses a Dvd directed by Maria Von Heland, which is the epitome of gaia, – the Deutsch expression of cool.

With a level of acting rarely achieved outside of Europe, ‘Big Girls Don’t Cry’ reveals not only incredible talent in the form of both Karoline Herfuth and Anna Maria Muhe, but also in the director’s focus on a simple act of revenge that should have been discussed, before its dire consequences decline with chaos and disaster for all characters throughout.

“One of the best directed films to emerge from Germany”
With staggering and remarkable strength, this rather unique film from Germany concentrates its purpose to allow the audience to follow the events of two friends attempting to keep to separate paths of their choices in life, at an extremely difficult time in life.

‘Big Girls Don’t Cry’ is possibly one of the best directed films to emerge from Germany for some considerable time and although German cinema is always in a genre of its’ own worth and merit, this film is a daring and provocative piece of work that does deserve to be experienced.

As a distinction of crossover occurs at times visually in European cinema, the use of subtitles can be dependant but even without them, ‘Big Girls Don’t Cry’ is stunning to observe and rather surprisingly accurate to reality not only in Germany, but also in any country.

Maria Von Helan has in one film formed a versatile and extremely recommended work of coolness that is not only a warning of morals, but also of sexuality.