Four fascinating art commissions showcased at Lift the Lid: A look inside

Guests were presented with four new art commissions. You can still see two of them on the Island. 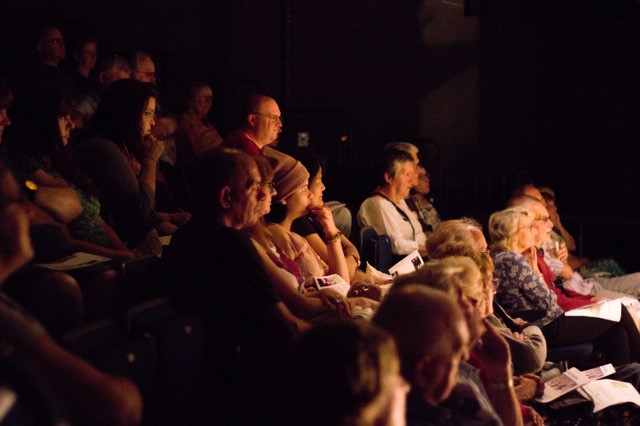 Tayla shares this latest news from Lift the Lid on Island Culture. Ed

Around 60 guests were presented with four new art commissions created as part of the Lift the Lid project on Sunday 15 September 2019 at Quay Arts.

Lift the Lid: A Look Inside was an event especially for people who were involved in any of the art commissions and the audience represented a number of those including those from Totland Parish Council, East Cowes Town Council and Ventnor Exchange.

Guests were treated to a story inspired by Phlegm’s Ventnor Giant mural, presented by storyteller Sue Bailey and created by pupils from an Island school.

The Great Light and Dark Show, an event in Totland by artist Julie Myers back in June 2019 was represented by a film documenting both the event and the people of Totland.

BearFace Theatre CIC then performed ‘We that breathe’, a community theatre show inspired by folklore stories from The Sacred Isle’s Paul Wilson, workshops with residents at Mountbatten Hospice and those involved with WOW Women’s Centre in Newport, with help from a puppet workshop at Barton Primary.

Finally the audience were shown a excerpt from Dmitri Galitzine’s film Back and Forth, featuring many of East Cowes residents. You can see Dmitri’s film for yourself in East Cowes until 5th October (see opening times).

So what’s next for Lift the Lid?
Jacqui Cusack, Arts Manager at Quay Arts, lead partner of the Cultural Education Partnership who commissioned the art said

“The past year has been about exploring the cultural heritage of the Island through art commissions in unexpected places and we’re so pleased with progress.

“Now we are focusing on helping teachers get to grips with OFSTEDs mandate to build cultural capital in children and young people, and so we have expanded our annual Cultural Expo event to a full blown conference featuring the well-known educationalist Professor Mick Waters.

“We’ll be at Oakfield CE Primary School in Ryde on Friday 11 October, and I’d like to invite all headteachers and arts coordinators, plus school governors with a focus on the arts, to join us for this inspiring day.”