Those following Cowes Week will know that Ladies Day takes place on Thursday this week.
It all looks set to be an exciting day of racing and will finish with the presentation of the Liz Earle Ladies Day Trophy, by Dame Ellen MacArthur at … 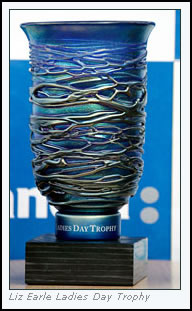 Those following Cowes Week will know that Ladies Day takes place on Thursday this week.

It all looks set to be an exciting day of racing and will finish with the presentation of the Liz Earle Ladies Day Trophy, by Dame Ellen MacArthur at the Royal Corinthian Yacht Club.

The award recognises those who have shown perseverance and determination against the odds and this year there are five incredible ladies (prepare to be humbled by the biogs below) nominated for the trophy.

According to the official release from Skandia Cowes Week, they are:

Louise Morton
Louise has been supporting Skandia Cowes Week consistently since 2003 with an all women crew. She teamed up with her friend Liz Rushall and they put together a group of friends on board her Folkboat “for fun”.

That year they finished 4th overall in the Round the Island Race and also scored a respectable Skandia Cowes Week result too! After two years with the Folkboat, Louise moved onto a Quarter Tonner Super Q. Then in 2007 she took over Espada at Skandia Cowes Week from husband Peter, and made the transition to helming as well.

As well as sailing in major regattas, Louise is also frequently behind the scene’s managing them, either in her former role as secretary of the Royal Corinthian Yacht Club, including running various World Championships, and as Quarter Ton Class secretary. The highly successful revival of the Quarter Ton fleet, Quarter Ton Cup and Vice Admiral’s Cup owes much to Louise’s commitment. There are few people who can combine this level of organisation and sailing successfully, so readily and cheerfully. Her transition to helming has been smooth, with a 3rd overall at Cowes 2007, winning her class at this year’s inaugural Ladies Championship, and an 11th overall in this year’s windy JPMorgan Asset Management Round the Island Race, up there with the TP52s.

Louise’s commitment to her sport has facilitated many women to get afloat at Skandia Cowes Week and she is a worthy contender for the Liz Earle Ladies Day Trophy.

Kerry Gruson
Kerry was the first disabled woman helm to compete at Skandia Cowes Week. Her condition, termed Anoxia (a lack of oxygen to the brain after being strangled by a Vietnam veteran), has left her with paralysis in the legs and arms requiring her to use a wheelchair for mobility on land.

While sailing a boat, Kerry uses a specially designed seat that provides the trunk stability necessary to sail in various wind conditions. A graduate of Harvard, Kerry is now retired from her job as a news assistant in the Miami bureau of The New York Times. She started sailing in 1991 at Shake-A-Leg Miami, and now teaches at the facility. Kerry has been teaching sailing and working at a strategic level in the advancement of accessible sailing for people with disabilities for many years.

From her almost daily sailing classes with children and adults with disabilities, to her board membership of Shake-A-Leg-Miami (a charitable organisation working to bring people with disabilities into the freedom that sailing can bring), Kerry has been and continues to be a committed leader in sailing for all.

Kerry, following her recent participation in Cork Week, travelled round Ireland to work with Waterways Ireland supporting sailing clinics for people with disabilities. One of the first steps in her Global Links Programme, Kerry is working to build a network of organisations supporting people with disabilities to access sailing; building best practice models and providing learning experiences for both the organisers and participants.

Competing in her third Skandia Cowes Week this year, Kerry continues her focus on overcoming her own disabilities and the additional element of recovery from cancer. She is a living illustration of joy and courage in sailing – a highly deserving nominee for the Liz Earle Ladies Day Trophy.

Hilary Lister
Quadriplegic Hilary Lister credits sailing with changing her life. Since Hilary discovered sailing in 2003, there has been no stopping her. Not content to stay on the gravel pit sailing lake where she learnt to sail, Hilary set herself some amazing sailing challenges.

In 2005, Hilary earned national acclaim when she became the first quadriplegic to solo sail across the English Channel.

Hilary competed in the Skandia Cowes Week Round the Island race in 2005 aboard Pindar’s Open 60 with Emma Richards and Lee Sharpe in the Celebrity Pro-Am Race. In July 2007, Hilary sailed around the Isle of Wight, solo aboard her new Artemis 20. Now she has taken on the challenge of sailing solo around Britain on her Artemis 20. We believe her to currently be in Newlyn in Cornwall.

Katie Miller
Katie Miller only started sailing in 2002, but this year she is skippering one of the youngest average aged crews in Skandia Cowes Week, onboard her Beneteau Figaro II.

The 21-year old’s first major achievement in sailing was her solo circumnavigation of the United Kingdom in 2006. She re-enacted Dame Ellen MacArthur’s own trip to raise money and awareness for The Ellen MacArthur Trust, which is also the official charity of Skandia Cowes Week.

In total, she raised over £10,000 in what was a thrilling and life changing adventure.

Her circumnavigation had been inspired from her work with the Ellen MacArthur Trust where she had worked for two years as a volunteer crew member and general assistant during her college summer holidays. This year she returned to skipper one of the trips that take young people recovering from cancer on inspirational sailing trips.

Now, Katie is campaigning her Figaro II “Hot Socks”, so named by Sam Davies, in the double and solo series on the south coast of England before making her debut transatlantic crossing in the OSTAR in 2009. She is currently the youngest competitor on the confirmed entry list, and the only girl.

The OSTAR marks the end of her degree reading B.Eng Yacht Production and Survey at Southampton Solent University, and is the stepping stone to her ambitious goal to compete in the highly competitive French Figaro circuit before perhaps sailing onto yet bigger things.

Sam Davies
Sam Davies is one of the top five Open 60 female sailors in the world, which makes her one of the leading solo sailors in the world. She graduated with a Masters Degree from Cambridge University and has spent most of her life on the water, making her way in the offshore sailing world via the Mini Transat and the Figaro Class.

At the age of 33, she is now running an amazing Open 60 campaign called Roxy Sailing. Fresh, down to earth and with an unusual profile, she is someone that non-sailing experts can associate with and follow passionately.

Earlier this year, Sam competed in the Artemis Transat and took an amazing fifth place, being the first Brit and the first female home. Despite sailing ‘blind’ with no radar and having a collision with a whale, she arrived ahead of some of the other competitors who were racing newer yachts. This was seen as further proof of her talent.

Impressed, Sir Robin Knox-Johnston commented: “Sam has shown her real ability. She does not have a new boat but has been keeping up as if she had. She has done her reputation no harm and others will appreciate that her dogged determination is a threat whenever she is racing.”