Lucy Porter: ‘Thanks, you’ve been an… interesting audience!’

What should’ve been a great night’s entertainment at Quay Arts was sorely marred by some ‘intoxicated antagonists’. 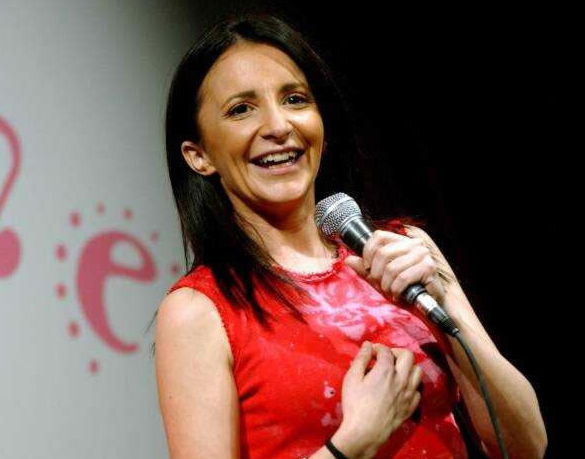 Thanks to Dom Kureen for this review of stand-up comedienne Lucy Porter’s gig on Friday at Quay Arts. Ed

“Thanks, you’ve been an… interesting audience!”

Her words dripped with an under current of disillusionment, as Lucy Porter departed the Quay Arts stage on Friday night.

Perched only a few metres from where her performance had taken place, the comedian’s intoxicated antagonists lingered defiantly, having spent the entire evening interrupting the set at pivotal moments and yelling from the bar, this was indeed the night of the intrusive idiot.

Got off to a great start
It had all started so brightly, as Porter regaled the room with a whimsical jaunt through her life in comedy and explained why she came to feel an affinity for the north of England, despite having been born in Croydon, to a Northern Irish father and a mother from the Midlands.

Her search for an identity led to various phases in her youth, including a brief stint as a Goth (which ended abruptly when others of similar persuasion rejected her for being too chirpy), a period idolising Morrissey and an ongoing fascination with miserable men, something she holds responsible for her husband: writer and actor Justin Edwards.

Either side of a short interval came some humorous anecdotes, the highlights of which revolved around a faux pas that resulted in an on-air apology to the Mayor of Derby and her take on the Shoreditch hipster scene, which she deliciously defined as having a very high ‘wan*er per capita’ ratio.

Cue the intoxicated antagonists
It was around 20 minutes into the set that a lady in the audience took umbrage to one of Porter’s tamest gags and decided to conduct her own examination into the joke, throwing in a ridiculous race card for good measure.

Even after a near-five minute exchange with the diminutive humorist, she wasn’t satisfied and audibly held noisy, derisive conversation until the end of the show.

Her friend also decided to shout a drinks offer towards the main stage just moments later. This pure, unflinching contempt showed no signs of ceasing and those responsible should have been thrown out long before the end.

She’ll have far better nights than this
It seems remiss to focus such a large proportion of a review for a talented comedian on a few disrespectful twits in attendance, alas regrettably their overbearing presence affected everyone in attendance.

Despite that, it’s important not to lose sight of the fact that the routine itself was nicely paced, allowing for a glimpse into the evolution of an engaging, likeable performer whose tour promises to be a success – she will have far better nights than this.

8 Comments on "Lucy Porter: ‘Thanks, you’ve been an… interesting audience!’"

newest oldest most voted
tryme
What a shame. What do Quay Arts have to say about their inaction? Word will be spread by Lucy, perhaps in R4 panel shows she appears on, and hey presto the Island gets a terrible reputation nationally, and others will think twice about coming here. And yet it’s such a great space to see someone good, (like Lucy). Also, why spend money on tickets if the occasion… Read more »
Vote Up00Vote Down
tryme

Vote Up00Vote Down
Cynic
What a great pity! :-(( QA should apologise to the performer for its lack of audience control if it has not done so already. :-(( However, experienced club stand-ups can cut the legs off hecklers with a few acerbic comments that gets the audience on their side. Whoever has the mike has the upper hand in those situations, so maybe a learning experience for Lucy Porter? Still… Read more »
Vote Up00Vote Down
tryme
She is a very experienced performer, but in such a small venue the rest of the audience is more likely to be a bit wary about weighing in and supporting the performer; who also has barely any physically protective space between herself and any trouble-makers. I wouldn’t fancy ‘cutting the legs off’ hecklers in that rather vulnerable situation. A couple of determined drunks have greater power in… Read more »
Vote Up00Vote Down
mury37
Commenters, please do not take this ‘review’ too seriously. I am the ‘lady’ (though I prefer the term ‘woman’) in question and this really is not a representation of the events of the night. I won’t bore you with a deconstruction of the proceedings, though I suspect that if you made it through all of Kureen’s absurd use of archaisms to register his ‘regret’, you have a… Read more »
Vote Up00Vote Down
DxK
Hi thanks for your feedback. As far as the gig goes, knowing who you are, I think you’re aware that I’ve held you in high esteem as a kind, intelligent person since meeting you, so although you had your reasons for getting annoyed I think they could have been relayed differently, still I was reluctant to focus too much on that aspect initially, until I spoke to… Read more »
Vote Up00Vote Down
Muddy

Having been to both the Lucy Porter and Robin Ince events and now read both reviews here, two things have stuck with me.

1. Robin was far funnier than Lucy
2. The drunken party derailed the Lucy Porter event, it was very uncomfortable for everyone else and I urge you to stay away from future events. Your belligerent defence of the situation also amazes me Mury37!!!

In the lady’s defence (and probably more than she deserves) Lucy just wasn’t funny enough, mildly amusing anecdotes some were but that is all.