Did you see the incident that took place around 9.30pm on Saturday night outside Hurst and Stripped? 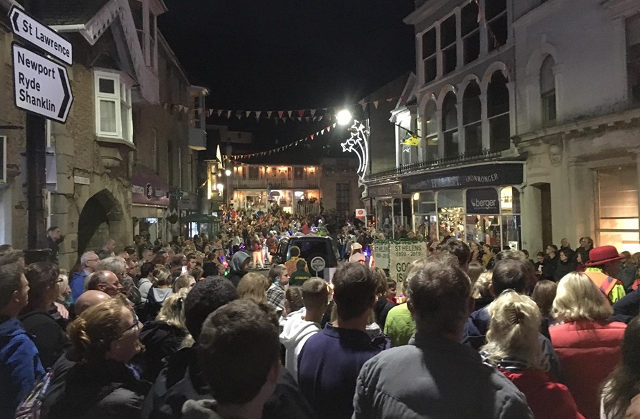 On Saturday night, during the illuminated carnival in Ventnor, a miniature Schnauzer was attacked by a large dog and tragically died from the injuries.

The Schnauzer belonged to Linda Cato, who is devastated about the loss of her beloved companion.

“Shortly before the start of Ventnor Carnival at 9.20pm on Saturday 17th August whilst walking home, my dog was suddenly attacked by a dog belonging to an onlooker.

“Despite the best efforts of a vet he could not be saved.”

Description of dog and owner
She explains,

“The incident happened between Hurst and Stripped burger bar. The owner, who fled the scene was a tall male wearing a pale blue shirt.

“The dog was very large, measuring to the thigh of his owner and is of a Husky-type breed with brown and black flecked fur.

It’s since thought the dog may have been a Japanese Akita.

Police investigation
Hampshire Constabulary confirmed they are investigating the incident, a spokesperson said,

“We are currently investigating after a dog was attacked by another dog on the High Street, Ventnor at some time between 9.15pm and 9.30pm on Saturday, August 17.

“The dog, a Schnauzer, sustained fatal injuries as a result of the attack.

“Officers have not yet identified the other dog involved, or it’s owner.  The other dog is described as a large husky type dog.”

Anyone who witnessed what happened or anyone who thinks they have any information that could assist, is urged to call Hampshire Constabulary on 101 quoting 44190294059.

Cato: So easily may have been a child
Linda goes on to say,

“The owner may probably never be found, however I feel that I have been given a brief moment to implore dog owners to think carefully about taking their dogs to loud or disconcerting events, or indeed to be responsible enough to muzzle pets who may be knowingly unpredictable in temperament.

“Tragic and traumatic events like this are only the fault of irresponsible ownership. This so easily may have been a child.”

She finished by saying,

“Despite being about to pick my dog up out of my increasingly closing pathway, a split second couldn’t prevent the heartbreak I currently endure knowing that my beloved companion was taken in such a fast, cruel and violent way.

“Heartfelt thanks to the mobile vet, the staff at Stripped, the kindness of three strangers and all those who have sent warm wishes and condolences.”

Get in touch
If anyone has any information regarding this incident please call the Police on 101 or contact the Isle of Wight RSPCA.

If you were taking photos or videos of the parade, perhaps you caught something on camera that could help identify the owner of the dog that carried out the attack.

Another dog owner with a smaller brain than the animal itself. Stand up for your actions you coward.

Ah the famous ‘amnesia’ strikes all those who know this dog and owner! IF he is a local or an Islander then it is 100% definite that they are both known but the usual “oh he/she wouldn’t attack another dog” or “It plays with my kids/grandkids and never shows any temper” will apply. FOOLS!

Who knows someone with a Japanese Akita