When answering a question about Trans people, MP Bob Seely allegedly said, “Depending on what colour of dress they wear on that day” on a Zoom call with representatives of the Isle of Wight Parish and Town councils. We have details of the complaint 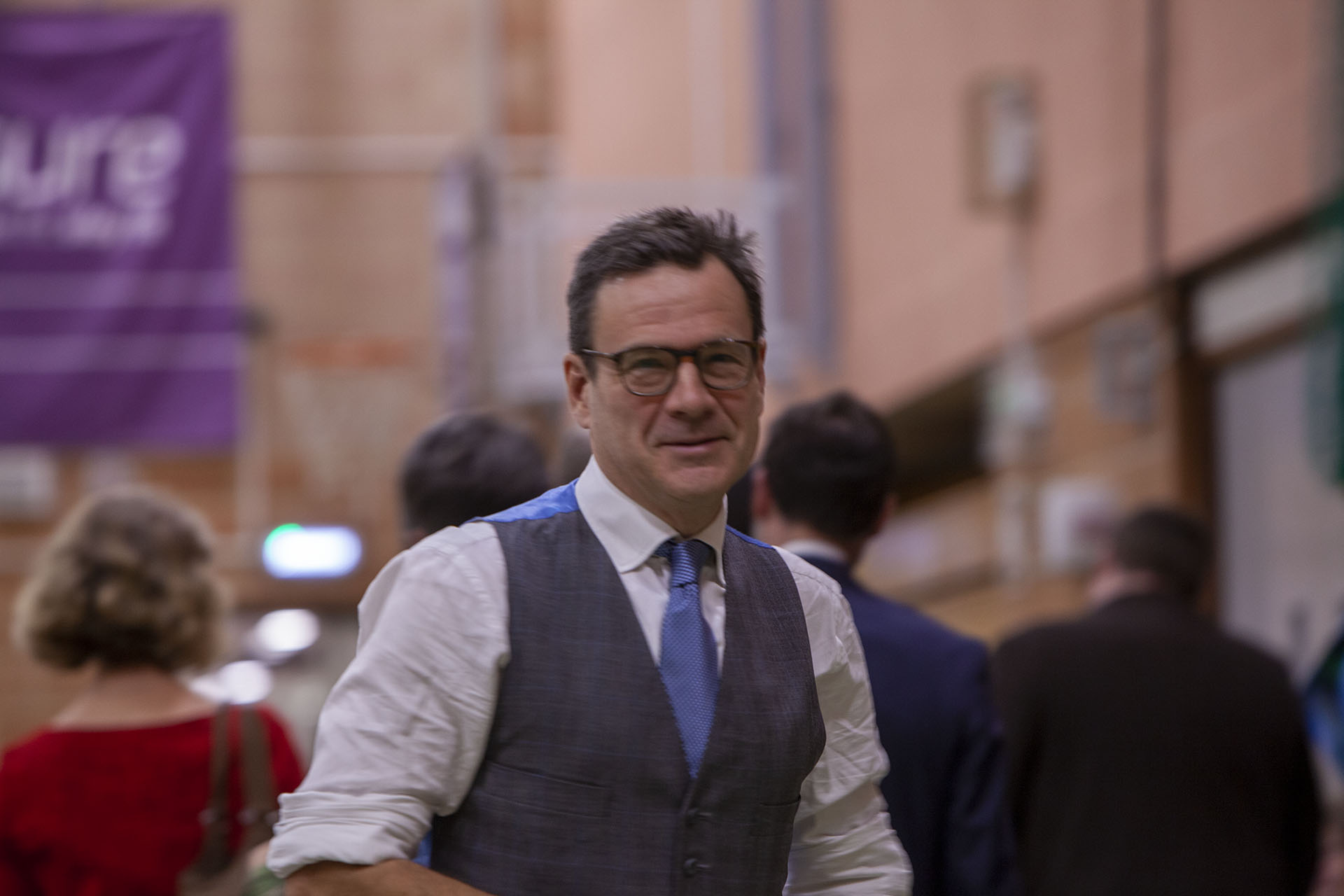 An Isle of Wight councillor has lodged a complaint with the IW Association of Local Councils (IWALC) following what he describes as “discriminatory” comments made by the MP about the trans community.

Members of the Island’s parish and town councils were taking part in a Zoom call last week with Bob Seely MP. He was asked by Chair of Chillerton and Gatcombe Parish Council, Cllr Nigel Phillips, how he would vote on the Government’s plans to introduce a law that will restrict the rights of trans women in using women’s facilities, such as public toilets and changing rooms (as part of the reform of the Gender Recognition Act).

Seely: “Depending on what colour of dress they wear on that day”
The MP told those on the Zoom call that he had to represent the majority of the Island and only 1-2 per cent of the Island population identified as trans.

He allegedly used the phrase “it depended on what colour of dress they wear on that day” when discussing the use of female toilets by trans women.  See Bob Seely’s response below.

Councillor for East Cowes, Cllr Karl Love, challenged the comments and says he was immediately accused by Mr Seely as ‘grandstanding’ – the MP then asked the Chair to move the meeting on.

Love: “A clear act and breach of the equality law”
In his complaint (which News OnTheWight has seen a copy of) Cllr Love says the “discriminatory comments which were made by our MP Bob Seely” were “without question an expression of discrimination and prejudice”.

“It is one thing to have a view, but something quite different to flippantly poke fun in a formal meeting and describe parts of our Island population – trans  people – as ‘depending on what colour of dress they wear on that day’.

“That is a clear act and breach of the equality law and is discrimination.”

He went on to say it demonstrated a “total lack of understanding about what it is to be trans” and was an example of the discrimination which many trans people face today.

“The comments were humiliating and a stereotypical representation, which reinforces the negative and in my view were used to justify his own personal and political views.

“They were in fact hurtful stereotype representations of the negative and had no place in a IWALC council meeting.”

Cllr Love says the MP should issue a full retraction and public apology for his comments.

Phillips: MP now seems to understand the issues better
News OnTheWight spoke with Cllr Nigel Phillips (who asked the original question) who explained that after the Zoom call, he put Bob Seely in touch with the organisers of the trans event that happened on the Island on Saturday.

Cllr Phillips said the MP met with them before the event and they talked him through the issues trans people face generally and also in connection with the upcoming vote in Parliament.

News OnTheWight understands that Mr Seely attended the peaceful protest on Saturday by those supporting the trans community.

Questions to MP
News OnTheWight put a number of questions to the MP this afternoon.

“As I have made clear, both the comment and tone of what Cllr Love has said is inaccurate. He is seeking offence where none was intended or taken by anyone apart from him.

“I am proud of my record when it comes to the LGBT+ agenda. One of the first things I did as MP was to support Isle of Wight Pride.

“I had a good meeting last week with a transgender activist. I also attended the trans demonstrations on Saturday in Ryde and chatted with several trans people there.

“I look forward to continue to engage intelligently, sensibly and sensitively with all communities on the Isle of Wight.”

As he claims the comment was inaccurate, we asked Bob what it was he did say, and for the questions to be answered.

This is the bloke who said that ‘gays are the new Jews.’ Nice fella.

Karl Love taking offence to something where no offence was intended? Surely not. No one listened to his ridiculous ideas about Wight Trash when he tried to single handily destroy an Isle of Wight business. No one listened then and no one is listening now.

Didn’t MP Bob Seely’s admitted ‘Depending on what size of sausage they ate on that day’ comment about pandemic rule-breaking people also lead to complaints?

Vote Up27-12Vote Down
fedupbritain
Cue Seely bragging on about his ‘involvement’ (Spoiler Alert it was zero) in the UK Govt’s decision to exclude Huawei from 5G to detract from this. On the subject of Chinese ownership of IT he has expressed deep concern about the ownership of a dating site in case it exposes “sexual information relating to the 3.1 million people who date on it daily” – a very odd… Read more »
Vote Up24-12Vote Down
Colin

The easy answer for public toilets would be to build single occupancy loos which are becoming more common these days. Are there not some already at Cowes?
The other point which has been made is suggesting a trans population of about 0.6% of the population. This would suggest approx 900 out of a population of 150,000 on the Island. Is this correct? How are these figures arrived at?

Single occupancy loos are an excellent solution to this problem, Colin. They also help solve the problem of social distancing in a pandemic. Shanklin has award-winning toilets of this kind, both in the town centre and in the Old Village. No new-build is necessary – old toilet blocks were converted to house rows of these.

Vote Up15-1Vote Down
mariner58
The, admittedly few, trans people I’ve met are, generally, nice people and as fully equipped with intelligence, both good humour and a sense of humour, a sense of perspective and the ability to distinguish between genuine insults/prejudice and the occasional, perhaps ill judged, throw away comments as most people. Do they really need the likes of Karl Love leaping to defend them as witless, humourless, permanent victims,… Read more »
Vote Up12-2Vote Down
Mark L Francis
There are about 0.6% Trans in the UK which is about the same as the number of Jews.(according to Gov.uk) So why do Bob & the Terfs have a problem with them? Why is this any better than anti-Semitism? There has never been an incident of any one of them attacking women in a public toilet. Besides which, how would anyone tell without some weird body search.… Read more »
Vote Up32-25Vote Down
wellsm

Probably because 0.6% of the population seems to occupy 90.6% of news coverage and articles.

I think you are right, which loses all perspective when we think there are mobs coming for us in our beds (or outside the cubicles).

National membership of the Conservative Party was 160,000 in the 2019. Let’s ban them from using public toilets. I seem to recall at least one of their councillors in the IOW alone was convicted of an offence in a public toilet a couple of years back. Am I right or am I right?

Vote Up39-19Vote Down
briev
Protecting the legal rights of women and girls to safe spaces such as public toilets,changing rooms and refuges is not anti-trans. Trans men and women rightly have equality in law and the UK Gender Recognition Act (2004) is one of the most liberal in the world, requiring neither surgery nor drugs for legal sex change. The proposed changes to the Gender Recognition Act would have allowed any… Read more »
Vote Up3-3Vote Down
Chiverton Paul

Who needs Trump when we have Mr Seeley. Sausage gate – transgender toilets and his comments about gays being the new Jews.
His PR team must be on overtime trying to mitigate his blunders.. He is a liability and an embarrassment to the island.

Vote Up17-12Vote Down
fedupbritain
You would have to wonder what a Holocaust survivor might think of his comments. There is no doubt that the LGBT community have a very rough time in parts of the Middle East and Africa, but to the sheer horrific scale of the Nazis? I think not. To think the Labour party has a problem with Antisemitism – that’s nothing compared to Seely. David Irving went to… Read more »
Vote Up10-2Vote Down
newman

Blimey, I don’t think Seely has ever denied the Holocaust has he? Hardly in the same league as Irving. Does enjoy a sausage though.

I think Irving went down for underestimating the scale of the Holocaust and denied its central planning. Seely has compared the current day treatment of gays (specifically) with the murder of over 6 million Jews. Either there are mass extermination camps for gays or the whole scale of the Holocaust was vastly overplayed and the death camps never existed according to Seely’s logic.

Irving was tried for and convicted of Holocaust denial. HalfSausageSeely is not in his league in that regard and I reckon we’d do better to focus on his many other failings rather than liken him to a full-on hardcore Holocaust denier.

I quite disagree Newman. Seely’s ‘gays are the new Jews’ comment is as anti-semitic as they come. Akin to Ken Livingstone’s remarks and Irving’s denial.

I’m not normally a fan of Karl Love, but he’s right on this occasion. Bob Seely’s remark was clearly flippant, mocking and hurtful. It’s on the same level as Boris Johnson’s remarks. This behaviour is very disrespectful. I don’t think you could take a remark like this out of context, he was wrong to accuse of ‘grandstanding’.