MyCharleston go Pier to Pier along the South coast

MyCharleston dancers are toe tapping their way around some of the south coast’s most iconic landmarks, including Sandown Pier on the Isle of Wight. 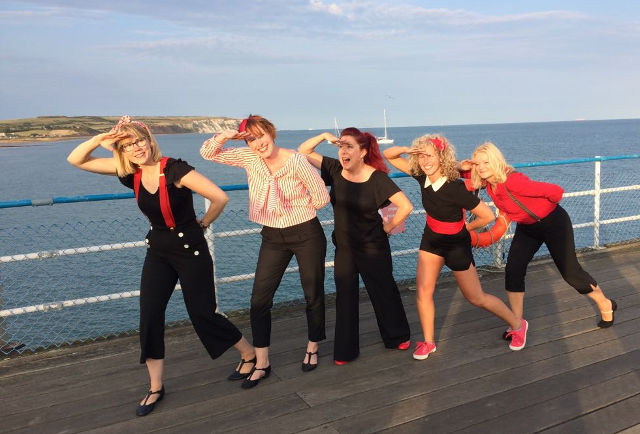 MyCharleston, showcases their students dance talents in a new video entitled Charleston Dancing Pier to Pier which brings together dancers on their local piers in Brighton & Hove, Portsmouth, Worthing and Isle of Wight.

“Pier to Pier is a celebration of the beautiful places we teach in and the vibrant people that live there. We wanted to show-off these stunning grade listed piers which are on our doorsteps and that the towns are dynamic places full of talent.”

A theme appeared
The Brighton based dance organisation, founded by Elena Collins and Fiona Ring, has gone from strength to strength in the past year as demand has grown for their classes and groups have developed all along the coast. “We noticed a theme appearing that everywhere we taught there was a pier.

“Therefore we wanted to create something which brought all our classes across the south coast together. The locations compliment the nostalgic feel of the Charleston and capture people’s imaginations of a vintage era.”

“It’s amazing to think that these piers would have hosted original flapper girls from the Roaring 20s. We also discovered that 1920s icons Charlie Chaplin and Stan Laurel performed at the Brighton Palace Pier to practice their comic skills early in their career and another music legends like David Bowie and Genesis played on South Parade Pier in Portsmouth.” “From all the piers we filmed, the one that really stood out for me was Worthing Pier. The art deco pavilion that was renovated in 2014 transports you back to 1920s and feels like the perfect place to Charleston dance.”

Where is included
The film includes Brighton Palace Pier, Worthing Pier, South Parade Pier in Portsmouth which reopened in 2017, Sandown Pier on the Isle of Wight plus a dance around the twenty-four cast-iron columns now standing by the British Airways i360, which were originally part of the substructure of the West Pier in Hove. The West Pier, is the most at risk Grade I listed building in the UK but it’s still the most photographed location in the city.

“Creating video content is a huge part of what we do as we love to bring our dance community together and now that we teach in multiple locations it only seemed fitting to create something new.”

“Our next goal is to get even more people Charleston dancing in new cities so if you have pier in your hometown, we might coming your way.”