“Spades will be hitting the ground,” for a new Isle of Wight hospital claimed Fareham’s Conservative candidate, live on TV this lunchtime. Reaction of the IW Conservatives has been less definitive 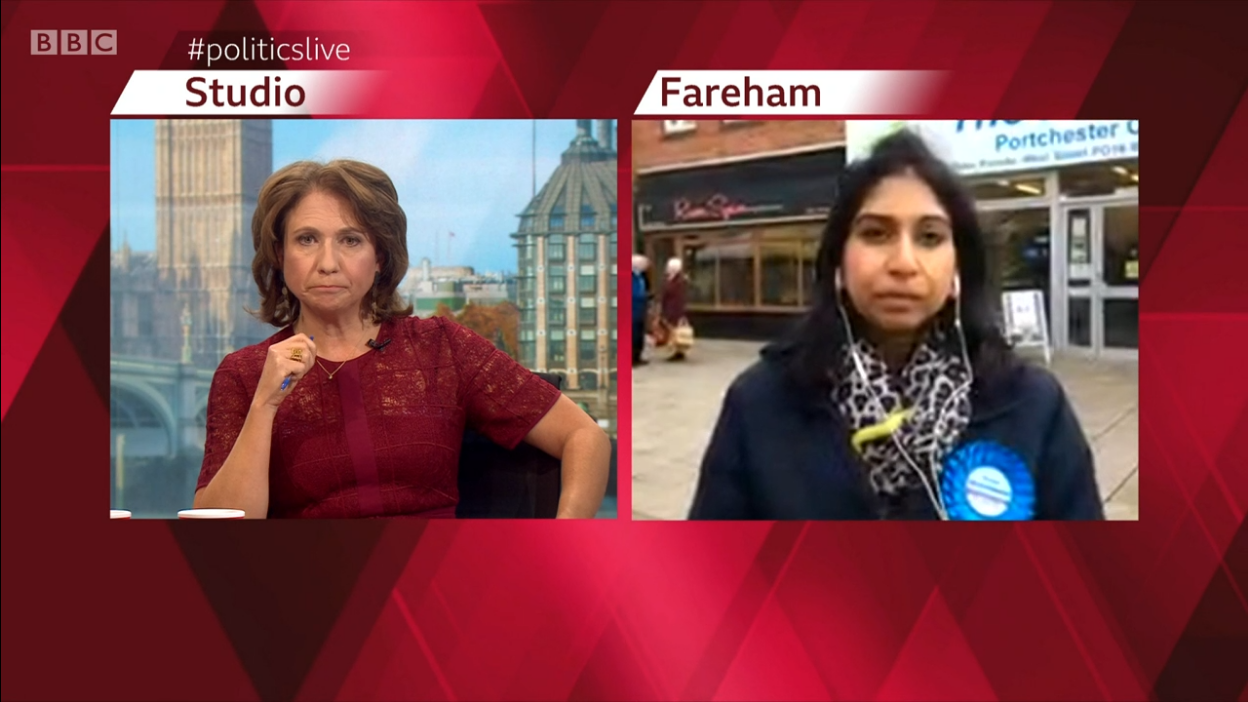 The Conservative MP for Fareham, Suella Braverman, today (Wednesday) told BBC’s Politics Live that a new hospital was being built on the Isle of Wight.

Ms Braveman was being interviewed following last night’s debate between Johnson and Corbyn and the claims and counterclaims that were made.

Braverman: “Spades will be hitting the ground”
Examining the Conservative claim of new hospitals, Ms Braverman told Jo Coburn there would be 40 new hospitals by the end of the next decade.

“The way they are built has been phased. There six hospital that are going to be commenced in their construction immediately. For example, I am here in Fareham, my constituency – not far from us, on the Isle of Wight is an example of where spades will be hitting the ground for one of those new hospitals.”

Fact check reveals the six locations
The BBC then went to reporter Hannah Wilkinson to fact check this. She said the Government had publicly announced new hospitals in Leeds; Harlow; Leicester; Watford and two in London to be delivered by 2025.

OnTheWight has contacted Suella Braverman’s Association office in an attempt to get more details. As yet, no reply – but we’ll update as soon as we hear back.

“It is clear that Suella was referring to the fact that the Isle of Wight is benefitting from a £48 million capital investment, as announced in the summer.

“The Island is the only NHS Trust in the whole of the South East to have secured funding as part of this announcement. We look forward to seeing this investment getting underway.”

According to the Isle of Wight NHS Trust, the £48m investment announced earlier this year will be for “building and IT improvements“.

“Obviously this would come as something of a surprise to all of us, given that the Tories have been cutting funds for St Mary’s for years, and moving services to the mainland. If true then of course I’d be as delighted as anyone else.

“If not true, then perhaps Bob might explain why one of his colleagues lied about it on TV.”

“This is another example of the Conservatives over-selling something, much like Boris’s withdrawal deal which is not Brexit more like Associate EU Membership.”

“Sadly it does not look like the government has any plans to build a new hospital on the Island – it appears Ms Braverman misspoke.

“Inaccurate comments like this from a known Conservative candidate show how little attention the national Conservative Party pay to the situation on the Isle of Wight.

“The main political parties have failed Islanders for too many years. We need to elect a new MP who can challenge the two party system, and fight for meaningful funding for our public NHS.”

“The Isle of Wight hospital is closing its departments, getting smaller. Very few qualified staff want to work and live on a disconnected island that isolates them from family and friends. If no staff, there is no hospital.

“So what is the point in building a new hospital? We already have one… we just need the skilled staff.

“Clearly this is an election ruse intended to manipulate, but is even more bizarre than normal. We need staff, not a new hospital.  Years of Jeremy Hunt disregarding the fair requests for decent treatment of doctors has decimated the vocation.

“Rather than building a new hospital, let us fund bursaries to train nurses and doctors. Let us create a fixed link to the mainland so that staff and resource sharing with mainland hospitals is possible … and so that patients requiring specialist care, can get there easily, quickly and affordably, visitors too.

“Bob Seely has cynically been promising all sorts of things for two and a half years, of which in my view nothing materialised. Don’t expect this to be any more realistic. It’s simply electioneering.”

OnTheWight has written to all IW candidates and will add their comment when we hear back.

Why is David Pugh answering for bob Seely all the time ?

Money to run the hospital we have at capacity would be nice – it would be cheaper too.

Vote Up28-1Vote Down
Alternative Perspective
All this nonsense of £48m for St Mary’s is a Boris Promise of jam tomorrow, To be dribbled out over 5yrs. The IW NHS Trust have said they will talk to ‘Partners’ about how to spend the money. Partners is code for private medical service providers along with SGH and QA on the Mainland, who will no doubt want a big slice of the pie. Antedating that… Read more »
Vote Up30-6Vote Down
sculler

Have all the Conservatives caught the Boris desease. Say anything, truthful or not as long as it gets you power

Vote Up19-1Vote Down
Mike Starke
Tory election candidate for Fareham Suella Braverman, in her infamous BBC TV claim, could not be misinterpreted when she said the Isle of Wight was “an example” if where a promised new hospital was being built, right now. That is what was “clear”. The insult to our intelligence by Cap’n Bob’s Tory agent, David Pugh, was his “clear” rewriting of Ms Braverman’s unequivocal falsehood. This serves only… Read more »
Vote Up17-5Vote Down
henry

why is the MP for Fareham telling us this and not Bob Seely? Either he is left out of the loop or Braverman is just saying whatever comes into her head at any one time.
Maybe its both.

And yet again someone is harping on about a fixed link! Nothing to do with hospitals at all.
PS. Dont hold your breath because it aint going to happen.

Fixed link.
Withdrawal agreement
Neither anything to do with the question.
And is it just me or are other people also tired of the constant use of the Term “hardworking families” by politicians- latest Javid- to justify whatever they propose to do , which almost certainly won’t benefit ANY kind of families

Too Right Nitonboy. Feeney’s obsession with a never happening link means that is all he ever says about any question. Tedious doesn’t even cover it. If his unattainable dream of a 10 min drive to Southampton or wherever did come to pass, the question then may well be, do we need a hospital here at all?