A target to raise £2,000 for Isle of Wight Foodbank and Isle of Wight Red Box project led to several councillors flipping pancakes yesterday. More within. 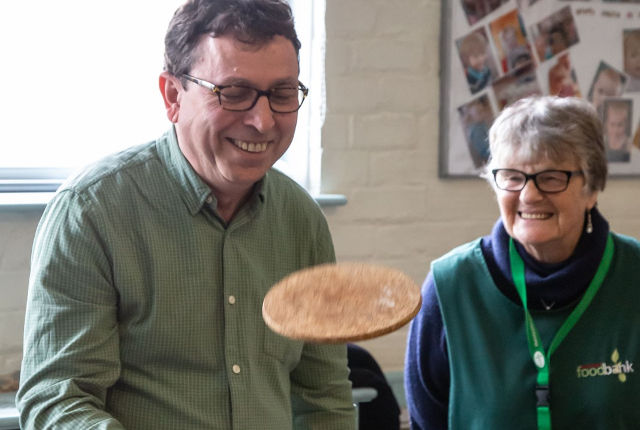 Rise in child poverty
Joseph Rowntree UK Poverty Report 2018 published in December 2018 states child poverty has been rising significantly since 2011/12 in the UK and this is the case on the Isle of Wight.

Championing the cause
Cllr Lilley has been campaigning about child poverty within IW Council and his motion at January’s Full Council to ask the current Conservative Administration to radically increase Isle of Wight Council’s target to reduce child poverty on the Island by 2025 was passed. He also raised the issue of child poverty at the February Budget meeting.

IW Food Bank and IW Red Box projects rely entirely on donations of food and sanitary products by the public at their collection points across the Island. On the Isle of Wight 53.5 tonnes of food were donated and given out to local people in crisis. However, both projects need finance to back up their essential voluntary work.

Lilley: “Everything starts with a child”
Cllr Lilley says:

“To me everything starts with a child and if a child is given a good start in life then there is hope for this child, the family, the community and society. However, if a child lives in poverty in the UK in 2019, they are 11 times more likely to fall into care and their future is less hopeful.

“Every child deserves hope and we have to focus more resources in changing this. As an older adult in the community, a granddad, I feel I have a moral and ethical duty to campaign for future generations and eradication of poverty. On the Isle of Wight the IW Food Bank and IW Red Box projects are at the coalface of getting food to families and children and for young women sanitary products they cannot afford, who are in crisis.

“We need to support this, but also campaign for a society that does not need this form of charity. It is totally unacceptable that children and families in 2019 Britain have to rely on charity to live.”

Pancake flippers
The current record holder of the Ryde Pancake Challenge was Cllr Wayne Whittle who had achieved in 2018, 330 flips in five minutes to Cllr Lilley’s 235.

This year’s fundraising target is £2,000 to be split between Foodbank and Red Box. At the event Cllr Lilley gave £50 to each project’s representatives. By the end of the event £950 had been raised and all Challengers are now contacting sponsors to hit the target. Whittle: “A bit of fun with a serious message”
Cllr Wayne Whittle, attending the event although he meant to be at a Cabinet Meeting, stated:

“I couldn’t not be here. I have been training and delighted my unbeaten record has increased. This is a bit of fun with a serious message and Michael’s and my ward in Ryde have some of the highest poverty on the Island and the Ryde Foodbank is a real lifeline and needs all our support. I will continue to support Michael’s annual event.”

“What a great event and great fun with the competition which was enjoyed by a huge crowd. Out of it comes some very welcome funding to sustain and support both the Food bank and the Red Box initiative. Both great charities.

“Well done to Cllr Lilley for organising this successful event once again… the fight to relieve poverty in all forms continues with these important initiatives.”

“Taking part in the Ryde Foodbank Pancake Tossing Challenge this morning was a lot of fun, but carries with it a very serious message. Too many people across our Island are having to make impossible choices, whether to have heat or whether to eat.

“Please support your local Foodbank, while those of us who are in a position to effect change, work towards a fairer, more sustainable society where Foodbanks are no longer needed.

“My sincere thanks go to Cllr Lilley for his dedication and tireless efforts to fight for a better life for those residents who are struggling on our Island. He has my respect and my utmost support.”