Lord Adonis was Secretary of State for Transport from 2009 to 2010, and Chairman of the National Infrastructure Commission from 2015 to 2017. He met recently with Pro-Link members to discuss the feasibility study. 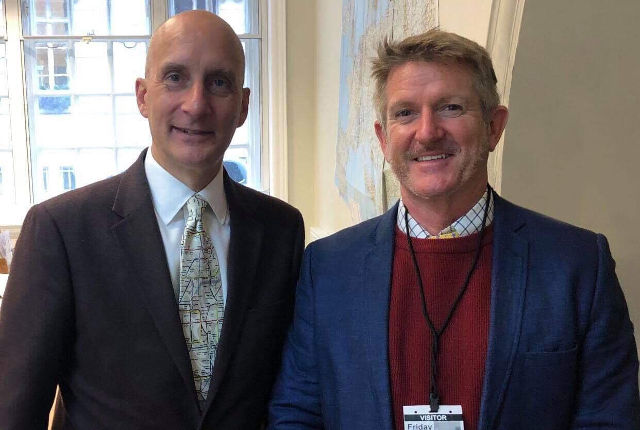 This news is shared with OnTheWight by Carl Feeny of Pro-Link. Ed

The meeting came subsequent to the ex-Minister of Transport tweeting his consternation while attempting to cross the Solent recently, disrupted in both directions.

“Lines of communication regarding cross-Solent transport issues have been ongoing with Lord Adonis since his visit to the Isle of Wight.”

£100k Feasibility Study
After five years of consultation, Pro-Link has developed a proposal for an IOW fixed link, dubbed the ‘Solent Freedom Tunnel’. Infrastructure experts ARUP have offered to perform a £100,000 (plus VAT) viability study into the scheme, which would qualify as a ‘National Infrastructure Project’.

“A personal meeting at Westminster with Lord Adonis was deemed appropriate, along with representation from ARUP”

Taskforce recommendation
In 2017, the fully Independent ‘IOW Transport Infrastructure Taskforce’ made strong recommendations for a ‘fixed link feasibility study’.  The Taskforce had been commissioned by the IOW Council and chaired by highly respected Christopher Garnett OBE.

“Lord Adonis is astonished  that the IOW Council has neglected to implement such an important recommendation.

“The IOW MP – Bob Seely since being elected, has curtailed the Taskforce, effectively blocking the study, while also setting up a new IOW Transport Board instead, that includes Red Funnel and Wightlink as stakeholders.

“The MP’s cousin, Patrick Seely, is now a non-executive director of Red Funnel also. While these ferry companies are in control,  the MP’s Transport Board is unlikely to support a study that could create radical competition to them.”

Reliant on public funding
Pro-Link has been forced instead into public fundraising for the study while the IOW Council and MP are refusing to request local or central government payment sources.

“Sadly, even though Lord Adonis has assured help when possible, the meeting at Westminster concluded with him unable to assist study funding until the IOW Council and MP requests it. He has stated publicly already his bewilderment of such an inept IOW MP, who has obstructed the study.

“This negligence by the MP and Council, is also thwarting Island business leaders and others from donating to a study. They are aware that positive study conclusions could similarly be ignored, as has happened with the IOW Infrastructure Taskforce recommendations.

“Potential donors feel the Council and MP would still ignore further investigations. I personally believe though, that the study conclusions will be so persuasive, the MP’s obstructive position will be rendered untenable.”

Feeney: Quitting is not an option
Carl Feeney concluded,

“The campaign to facilitate cross-Solent freedom will continue for as long as it takes… with whatever it takes.

“Quitting is not an option.”

What “independent” polls would those be then?

That would be the county press poll where it was discovered that Feeney was not only making multiple votes himself, he was encouraging others to do the same – and he admitted it.

There have been no independent polls on this matter.

Just saying it over and over does not make it true.

Had a tizz because his chosen method of transport is late. Welcome to the real world. I expect one of the mainaland trains was a bit late going north so he wants HS2. Best he stays in Westminster with the rest of the trough feeders and not venture out to the backwaters.

This smacks of desperation. Regarding Brexit, “the People” voted out, that is that. Similarly, the Island People voted in the 80’s to reject a fixed link. So what’s the diff? Fly away Mr Feeney.

Public opinion on the island has changed since the 1980s, due in part no doubt to the decline in ferry services highlighted in TITF and the widening gap in the living standards of native islanders compared to the nearby mainland.

Vote Up11-18Vote Down
grumpymoo
Oh gosh! Not this again!? So Lord Adonis is suddenly interested because his ferry was late. Shame he wasn’t interested when he could have actually made a difference as Secretary of State for transport, eh? No one will listen to him now, mainly as a tunnel is not even that great of an idea. If it were, the idea would have been snapped up long ago by… Read more »
Vote Up11-5Vote Down
Alternative Perspective

Great to see some progress on this at last

This is progress?
Talk is cheap,Carl Feeney has always said there is support for the fixed link but still hasn’t secured viability study funding via his campaign (it fell flat on it’s face)
It’s now the standing joke on the Island!

Vote Up23-8Vote Down
Steve Goodman
On the subject of cheap talk on transport infrastucture: 1. “The PM has made no secret of his support for infrastructure projects that increase connectivity for people” (Government spokesperson to Channel 4 news on the PM’s instruction to explore the possibility of building a fixed link celtic crossing between Scotland and Northern Ireland.) 2. ‘The Cowes floating bridge provides a reliable service’ laughable line from our local… Read more »
Vote Up11-2Vote Down
Tim

Nevertheless other inhabited islands in the same archipelago as us have direct road links to the mainland.

Vote Up11-16Vote Down
Rockhopper
But no tunnels Tim, which is what is proposed. Anyway, I thought the viability study idea was to be abandoned if the funding page hadn’t reached the required amount by 31 January this year. It’s nowhere near it as yet but still begging and has grown very little over the past few months. Forget erroneous “polls”, people have indicated that there is not enough interest by not… Read more »
Vote Up15-6Vote Down
Tim
That’s quite correct, the other islands have bridges not tunnels, however the prevailing winds that so often cause ferry cancellations would also affect a Solent bridge which makes a tunnel a far better option. I think that its self-evident that the project is being progressed, its just a shame that a handful of influencial individuals are happy to compromise islanders living standards by futile attempts to delay… Read more »
Vote Up10-13Vote Down
Dalek

Why do people resort to insults when the intellectual side of their point of view falls apart?

Vote Up8-7Vote Down
block8
Here’s a question that should allow you to demonstrate your intellectual ability then Tim. When there is an incident in the tunnel, and there will be, it will be necessary to immediately stop all traffic entering the tunnel to allow emergency services to do their work. Can you advise me where all the stopped traffic will go? And please desist from using emotional blackmail, as in; “its… Read more »
Vote Up14-8Vote Down
Rockhopper
“futile attempts to delay things”, Tim? I don’t think so, the project is going extremely slowly without any external assistance from those who are not pro-link! Additionally, there is a paragraph header which mentions the “£100k Feasibility Study” and then, in the body of that para a “£100,000 (plus VAT) viability study into the scheme”, quoted verbatim from Carl Feeney’s words – surely, he knows which is… Read more »
Vote Up2-2Vote Down