OnTheWight grabs a chance to question the well-known Shanklin man on his thoughts about representing Shanklin and what he thinks is needed to get the Island back on its feet. 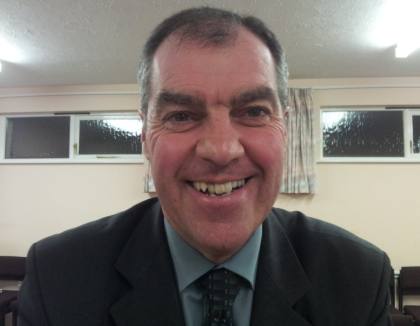 As has been widely-discussed, Richard Priest is the only candidate running in Shanklin South against the current leader of the Isle of Wight council, Cllr David Pugh.

We met up with Richard at the Riverside Centre in Newport (which he runs) when the Fisheries minister, Richard Benyon MP, came to speak to Islanders. In the process, we ended up getting an exclusive interview, as Richard Priest hasn’t been interviewed by any other Island media.

Of interest to Shanklin and Island residents
We explore many areas of discussion that should be of interest both to the residents of Shanklin, and people across the Isle of Wight, as you can see from the bullet points lower down this article.

Why an Independent?
When asked why he was running as an Independent, he told OnTheWight that as a town councillor for 20 years, he’d never being part of a political party – the same with his running mate, Jon Gilbey.

Richard went on to say, “The Isle of Wight is too small to have Party politics get in the way of doing things. I just don’t the idea that things are voted through because it’s on block and the party says so. I think there should be debate. I think the community should be involved in that debate … and whatever the outcome, it’s more measured, it’s more democratic and people feel they’ve had a say.

“At the moment I think people are feeling really frustrated, that they express a view – and everyone goes against that view – and it’s ignored. I think the level of frustration is tangible.

“When we were out on the streets last weekend, canvassing, it was incredible the number of people just saying it was good to engage and express a view, and you guys will take those views forward, which we have done over 20 years in Shanklin.”

“I think the frustration we’ve got is people do things that they aren’t actually signed up to do – and that hasn’t been open and transparent. We’re saying we are about doing and we’re trying to be positive.”

Subjects covered in the interview
The interview (below) lasts for 30 minutes, so here’s a list of the points that are covered.

David Pugh
We contacted David Pugh earlier today to offer to do an interview with him, but at the time of publishing we haven’t heard back from him.

What an excellent interview!
Well done to both Richard and Simon.

I agree, Simon did a very good, measured, impartial-sounding job. What a refreshing change from national political interviewers. Here we got relevant questions, and the opportunity, without being harried every few words, for Richard to give us a real sense of what he’s all about.

Hopefully from today we will stop being treated like kids as the last edition of “Rainbow” is shown on the Island. Zippy has gone , George is going and the people will have a chance to remove Bungle.

People of Shanklin, please don’t be complacent today and think Richard is going to walk it. The Tory vote is strong and organised with voters who will always vote blue regardless. What cannot happen is through the usual Island apathy, people stay indoors, don’t vote, Pugh remains, and nothing changes. The Island is relying on you Shanklin, please do your bit and vote Richard Priest!

Vote Up10Vote Down
old bull
Please vote and, vote Independent. The Tories have a tenuous grip on many seats and they only need to lose 5 seats to lose control of the Council. Pugh could possibly win but lose control of the Council, he could then grow up and get a proper job, if he could find one. He might have a problem with his CV! Go Richard! I beat an earlier… Read more »
Vote Up10Vote Down
sam salt
Today is a day when we can make a difference and I would urge everyone across the Island to go out and wisely use their vote. There are good candidates standing throughout the Island, those that are in touch with residents and reality. Not only do the voters need to get out in Shanklin South they need to do it in Wootton, Newport West and other places… Read more »
Vote Up10Vote Down
Mason Watch

Give Pugh an excuse…? I’ll buy the incompetent buffoon and his gang of “no hopers” a ticket on Wightlink right now, no excuse needed
Please make sure everyone votes tomorrow, this is it….. No more chance after Thursday to remove the Boy Blunder and his self grandising chums

Vote Up00Vote Down
bayboy
Come on Richard. Of course there was nothing in the Tories manifesto about shutting toilets, libraries etc. There also no mention from the Labour government that they had bankrupt the country and that local council funding was about to be slashed by over 30%. What would you have cut when you’d sacked 500 staff and reduced senior staffs salaries by 30% Toilets, tics etc Are hardly essential… Read more »
Vote Up00Vote Down
wightywight
@Bayboy: Precisely the attitude the conservative administration has taken and the reason we are where we are today. Let’s start (political) history at a convenient moment to support a tired and worn out, as well as discredited, allegation. The financial position nationally has been aggravated over several decades – not starting just from the Labour government in 1997. Of course, the international banking crisis of which the… Read more »
Vote Up00Vote Down
tryme

There’s a man ready to get going at CH. A very convincing interview – now give him the job!

Come on get out there, we need new whipping boys, cuts will still happen, but at least we would have voted for them. Central government will still rule. But it will look a bit more democratic locally. I have said it before. If we could really change things, do you honestly think they would let us vote.