Cllr Wayne Whittle gave 300+ Islanders – who have been campaigning to save the Ryde Arena ice rink – some positive news on Saturday. He said the Isle of Wight council was “going to go legal” and that “it’s starting next week”. Many others also added their own words. 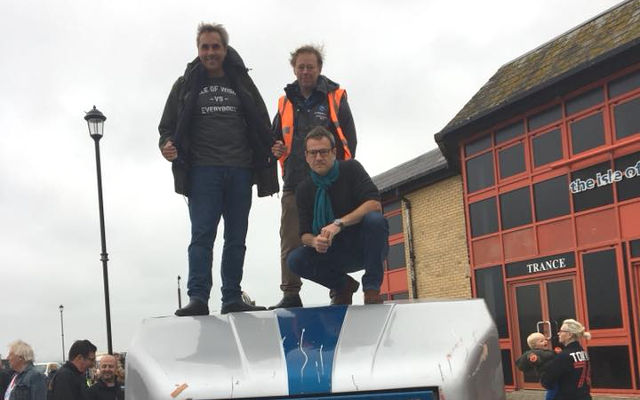 Those campaigning to bring back Ryde Arena‘s ice rink heard some positive news at the weekend.

During the Link around the Rink event, which the Community Action Group say attracted around 300 people, Isle of Wight councillor and cabinet member for Regeneration and Business Development, Cllr Wayne Whittle, gave some promising news.

Whittle: “We’re going to go legal”
Reading from a script that IWC has confirmed to OnTheWight was prepared by their officers, Wayne told the 300 + people they had to be very careful “with what we say”.

“The council has been collating evidence about the lack of use and poor maintenance of this building in preparation for the last and final negotiations to have the rink reopened or returned to local council control with AEW.

“I recognise the complexity of the legal position and that officers have been careful in working through a complete set of issues and are now pressing the officers and expect that these negotiations will be concluded as quickly as possible, so that a public statement can be made about the position by no later than Christmas.”

“So basically we’re going to go legal and it’s starting next week.”

Seely: “I don’t like bullies”
Isle of Wight Conservative MP, Robert Seely added his support to the campaign telling ‘Save the Rink’ supporters,

“I don’t like bullies and I think AEW are bullies.

“I said to the council I will do whatever I can in Parliament to bad mouth AEW, to exert some sort of moral pressure on this company to do the right thing.”

He went on to say he’d been asked by the council to “hold off for the moment” and added that he was “quite impressed with what the council and councillors were doing”.

“We are trying now to use the law to make them behave in a more considerate way.”

Seely: Will use “any power and influence”
Bob went on to say,

“I will use whatever power and influence I have as your representative in Parliament to show these people that their behaviour is wrong, that they should behave better and with greater respect towards us, towards Ryde and towards our young people”

You can hear both speeches on the Staying together for Ryde Arena Facebook Group.

Critchley: “Impressive dedication and persistence”
Island Labour Chair, Julian Critchley, was at the rink along with fellow Ryde Town Councillors on Saturday morning.

“It’s so impressive to see the dedication and persistence of the people here, fighting to re-open their rink. None more so than the young skaters who still travel miles and give up hours to pursue their dreams, which AEW’s outrageous action threatened to take away.

“The fact that the same Tories who flogged off this public asset to a private company with no Island links, are now being forced to campaign for its return to community ownership, is testament to the impressive determination, resilience and sheer indomitable bloody-mindedness of the people involved in this campaign.”

“I was proud to be there and stand with my community in standing up to the unacceptable face of big business.

“Even after two years, the community can come together on a wet October day, and say ‘AEW, you may have closed our rink, but our hearts are still open and our community spirit is very much alive and our campaign will continue until the building is back into ownership of the Island’.

“What has to be celebrated is all the young people that have continued to train and win major competitions without an Island rink, they are real heroines and heroes. We need to support them to keep theirs and our dreams alive.”

AEW statement
In a statement to the BBC, AEW said:

Negotiations had shown “there is currently no party in a financial position to continue operating the property as an ice rink and the council does not wish to assume this role”.

“However, AEW continues to have a dialogue with the CEO of the Isle of Wight Council, in the hope of finding a satisfactory resolution, potentially as part of the council’s longer term plans for the regeneration of the seafront.”

newest oldest most voted
Colin
Read the last AEW comment carefully.” Regeneration of the seafront”. Exactly why AEW have the building because they want to redevelop it and not as an ice rink. If you do a simple google you will find the Arena on their website with the following words alongside. “Waterfront location with alternative use potential” Can you trust the IWC to have it re-opened somehow as an ice-rink having… Read more »
Vote Up25-1Vote Down
iowdave

I can’t see that an ice rink will ever be self financing. 300 protestors will not pay for the maintenance of this building.
Ryde could benefit from a decent theatre. With links to the mainland, top acts could attract audiences from across the south coast. I’m sure that it could be as big a pull as Classic Cars, Scooters etc. etc.

A theatre? They had one. The IWC sold it off for £300,000 or so. It’s sat there doing, er, well, doing nothing other than deteriorating. The electric was cut off early last year. Maybe Mr. Gladdis may like to tell us how it’s all going?

Vote Up100Vote Down
iowdave
I don’t know whether or not you visited Ryde’s theatre, but there was never the possibility of attracting top acts. It was just not big enough. You cannot attract popular shows unless the audience is large enough to pay for them. A theatre was just a suggestion that would attract more than just 300 protestors and I bet most of those did not even use the rink.… Read more »
Vote Up1-12Vote Down
iowdave

Well, where are your suggestions or comments, downvoters. You would obviously like to see the building demolished.

Vote Up3-11Vote Down
Colin
The Island has Shanklin theatre and Medina theatre, both of which have regular events. One more theatre for a population of this size would be too many. I have been to plays at Ryde theatre many years ago and can remember what it was like. The sea-front arena has staged visiting bands and shows but it gets a bit chilly down there; the clue is in the… Read more »
Vote Up9-1Vote Down
iowdave
Both Medina and Shanklin do a good job but will never be able to attract “top acts”. Southampton can do it so why can’t we have some of the business. As for getting chilly – well keep you coat on! The Arena can possibly hold an audience of 2000. It has links with the mainland. It is close to bus and rail links on the Isle of… Read more »
Vote Up1-5Vote Down