Raising money and awareness of Progressive Supra Nuclear Palsy, Sam is swimming 8km, cycling 100km and then running 42km – all in 24 hours 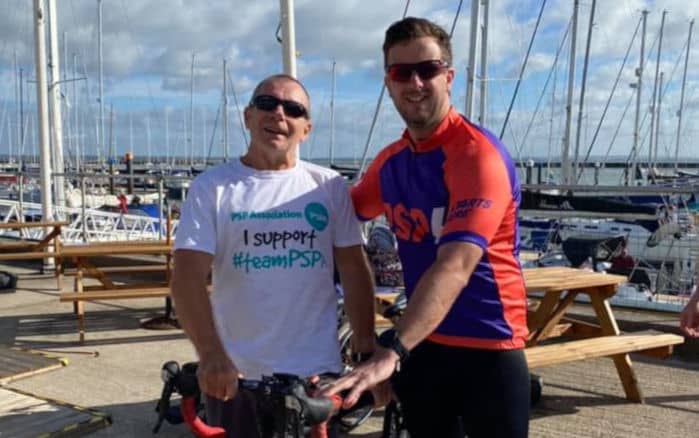 Set off at 6am
Just before 6am Sam launched into his 24-hour challenge by battling a strong headwind and swimming 8km from Ryde to Cowes. Although the sea is not as affected by the weather as it was yesterday, it’s still pretty choppy out there.

The swim was estimated to take three hours and pretty much on the dot, just before 9am Sam reached the Cowes marker.

100km bike ride
After a rest and refuel, just before 10am, Sam jumped on the bike and set off on his 100km cycle ride around the Island.

And a marathon
Once that’s completed, Sam will then run a marathon (42km)!

Raising awareness for PSP
Supported by family and friends, Sam has set himself this challenge in order to raise awareness of Progressive Supra Nuclear Palsy (PSP), what he calls a ‘cruel condition’ that affects his Dad, Mark Blanchard.

Mark was himself a keen athlete who enjoyed sea swimming in Gurnard Bay and was a keen cyclist – holding the title of chairman of Vectis Cycling Club from 2013-2016.

Sam has been training for months and so far the challenge is going well.

You can follow the rest of Sam’s challenge over on his Trisle of Wight Facebook Page which is being regularly updated by family members.