Down to the Coast are looking to conserve this important piece of the Island’s seaside heritage and are keen to hear your stories or see your photos of Brown’s Family Golf. 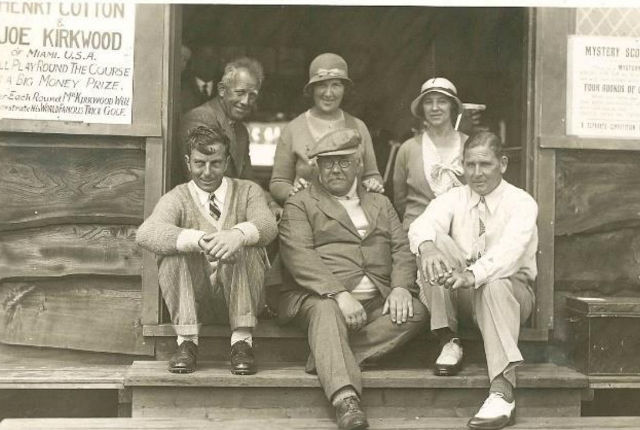 Peter Fellows shares this latest news from Down to the Coast. Ed

Brown’s Family Golf located on Sandown seafront is one of the Isle of Wight’s remarkable, but all too often overlooked assets, borne out of the incredible period in the town’s development as a popular seaside resort in the early 20th century.

Designed by Sir Henry Cotton
Brown’s is significant not just for its record in use as a pitch and putt course for more than the 80 years. It was designed in the early 1930s by Sir Henry Cotton, Britain’s leading golfer of his generation (and some say of all time).

After winning the British Open Championship three times, Cotton went on establish himself as a leading designer of golf courses and Brown’s is understood to be the oldest example of his work still being played.

Role in WWII
The story of Brown’s does not stop there. It also played an extraordinary role in World War 2, being a clandestine base for the Pipeline Under the Ocean (PLUTO) effort which pumped fuel to the troops landing on the Normandy beaches during D-Day in June 1944.

In terms of popularity Brown’s probably reached its zenith in the 1950s when the attraction extended across almost 20 hectares and included its own ice-cream factory and the adjacent Canoe Lake and bakery, which produced much sought-after cream doughnuts.

Population destination today
Today thanks to the efforts of John Deacon and friends of the site Brown’s remains a popular attraction for locals and visitors alike retaining its distinctive 1930s blue-glazed tile Clubhouse and its Cotton-designed Isle of Wight shaped 8th green.

Share your stories
Here at Down to the Coast we are keen to celebrate and where possible, conserve this important piece of the Island’s seaside heritage and are working with partners to gather as much information about the site as possible.

Whenever my father’s mother visited we always went to Brown’s for the ice cream they made at the factory (I remember it had little bits of ice in it)as she reckoned it was the best she ever tasted. I later worked there – two sisters ran it- I think one was called Mrs Snowball.- giving out golf clubs.

Vote Up30Vote Down
dave1950
I have been holidaying on the Island since 1953. In the 1950’s and 1960’s every year we stayed in Sandown and went to Browns several times during our holiday. I have many happy memories of Browns. It was the first place I picked up a golf club. I remember the wonderful ice creams from their own factory and the superb cream cakes from the cafe at the… Read more »
Vote Up30Vote Down
dave1950
The Island hole was made even more difficult by being surrounded by water. If your ball went in there you had to fish it out using a long pole with a scoop on the end. The course backed onto the local landfill site which was always a big attraction for Gulls. Their white feathers would be strewn all over the course making it more difficult to find… Read more »
Vote Up20Vote Down